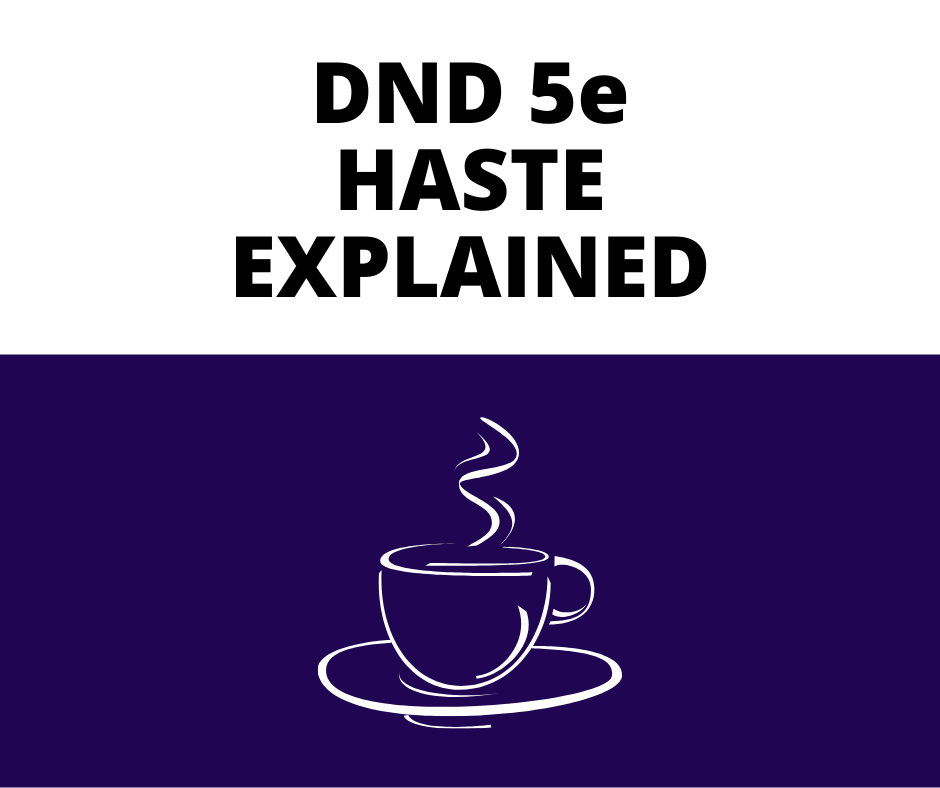 Happy Sunday everybody! In today’s post, DnD 5e Haste Explained, I’ll be going over one of my favorite spells today. First I’ll explain how it works, then give a little flavor on the spell itself, then I’ll go over some of the burning questions y’all have!

So ingest some coffee and get hyped up for our post on haste!

Haste is a 3rd level Transmutation spell. It costs one action to cast, lasts one minute, and is also a concentration spell.

The spell works by targeting an ally, or yourself and casting the spell. It gives whoever the caster targets double movement speed, a +2 bonus to their AC, advantage on all Dexterity-based Saving Throws, and they gain an additional (but limited) action on their turn.

The limit to the action the target gets is that they can only use said action to Attack (which is also limited to a single attack, even if the target can attack multiple times), Dash, Disengage, Hide, or Use an Object.

The caster and the target should keep in mind that when the spell ends, either naturally or by loss of concentration, the target is unable to move or take actions until after its next turn has passed. They are effectively stunned.

How to Use Haste

Haste can be huge if you have a front-line character who can deal a lot of damage per swing. Put it on your Barbarian, Paladin, or Fighter and watch them cleave through hordes of creatures.

Haste is a personal favorite of mine, as when I play a pure spellcaster role like a Wizard I like to use it to give beneficial effects to allies.

A smile cracks across the Wizard’s face seeing the greenish energy leave his fingertips and enter into the Paladin. The Paladin grips his hammer tightly as he feels a surge of pure unfiltered energy enter their veins. “For Pelor!” the paladin shouts and runs into the room filled with soon-to-be dead Kobolds.

Absolutely. Haste is great for buffing the party, as long as you can keep the spell up and running and not lose concentration on it during the bulk of the fight then it will generally always be a good spell to cast.

Can I cast Haste on myself 5e?

Yep! There is nothing that would suggest you cannot cast this spell on yourself.

How many attacks does Haste give 5e?

As stated in the post, Haste gives 1 extra action which can be used to attack. The attack is limited however as it’s just a single weapon attack. Nothing more.

Can you cast 2 cantrips with Haste 5e?

Nope, you cannot. Haste only allows for specific actions to be taken as part of the hasted action. Casting a spell, even an attack cantrip or melee affecting cantrip cannot be cast as those still use the Cast a Spell action.

As always I hope you all learned a little more about Haste. It’s a fantastic spell, always a useful one when you think combat will show up. With all that said, I’ll see you folks in the next post, so until next time, may your day be a critical success!