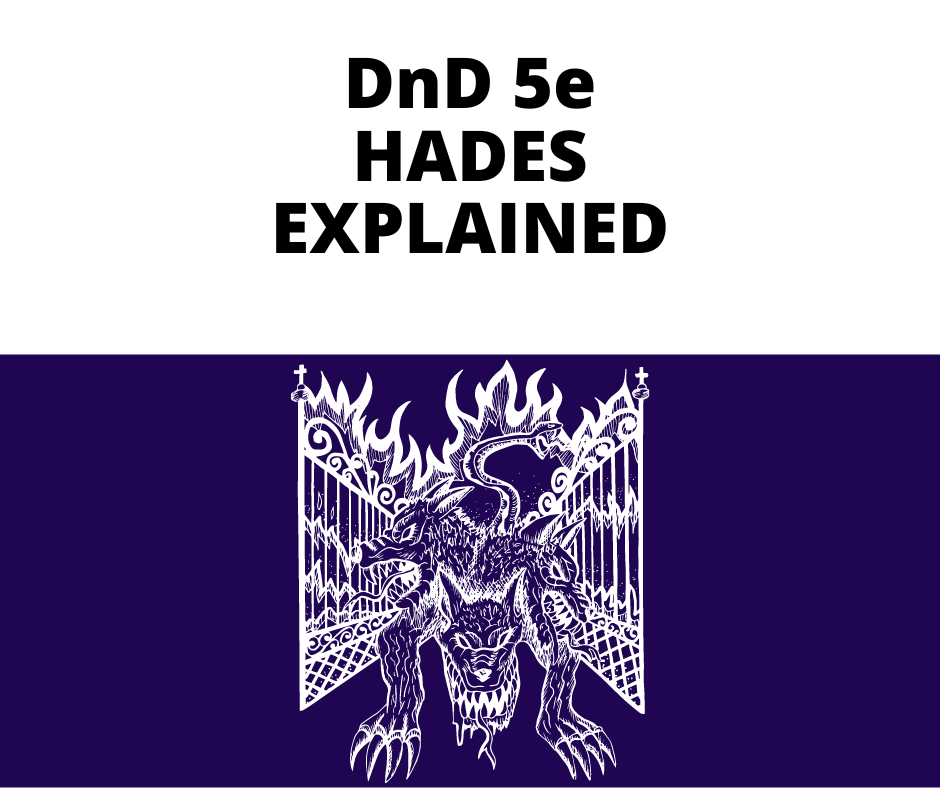 Hey folks, happy Friday! In this week’s post, DnD 5e Hades Explained, I’ll be going over this dull and apathy-inducing plane. So put on some upbeat tunes, and let’s try not to get stuck in this week’s post as we dive right in!

In DnD 5e Hades is an outer-plane. The one that is most aligned with true evil. It is described as a plane that amplifies and induces apathy in creatures who dwell there too long. Eventually causing them to lose all sense of self and give up, becoming a petitioner of Hades themselves.

Colour is void here, everything is in various shades of grey, literally. There is no sun, or stars in the sky, just an endless grey expanse. The ground itself is also various shades of grey, from certain distances black masses can be seen clashing, these are distant sightings of the armies of Devils and Demons fighting one another.

This plane is split into three layers, known as “Glooms”. The first is Oinos, the most traveled plane, and arguably the most overtly dangerous as a large portion of this layer is overrun by The Blood War, the never-ending war between Demons and Devils.

The second layer or “Gloom” is known as Niflheim, which doesn’t see much of the Blood War, as it’s covered in a thick mist. However, in these mists lurks twisted creatures, beings that have been warped to have fiendish traits, such as wolves or ogres.

The third Gloom is known as Pluton. This layer is home to a massive structure known as The Underworld. A place where it’s believed that one can retrieve the spirit of a lost loved one and coax it back to its mortal body.

This layer is consumed almost wholly by The Blood War. No matter where you go in this layer, the sounds of large-scale fiend-on-fiend conflict can be heard. The grey wasteland that makes up most of this layer is the central battlefield for the war, so many interesting interactions can be had here, mercenaries, traitors, war bands, and the like could all be potential encounters here.

A massive tower that looks like the spinal column of a gargantuan being sticks out of the ground. It is said to be 25 miles high, and also reaches beneath the ground a further 20 miles.  The tower is ruled by an Ultraloth Prince, who is also the ruler of all the Yugoloths. According to legend, no one else but the Yugoloths have held this tower, even though there are masses of Devil and Demon armies in this layer.

Anyone can ascend the tower and attempt to slay the Oinoloth, the title given to the current holder of The Siege Malicious, the artifact that gives the Oinoloth its power over Oinos.

This artifact is described as being a huge throne carved directly from the spine of the creature that makes up the wasting tower. Thus the throne is completely rooted in place. If anyone other than the current Oinoloth sits in The Siege Malicious, the throne will deal out some serious damage to the imposter.

However, if one has claimed the title of Oinoloth, and sits upon the throne, then the powers it holds are granted to the new Oinoloth. These powers only function within Oinos, but can have lasting effects across the entire multiverse. The power is the ability to create diseases. The Oinoloth is able to concoct new diseases and unleash them across Oinos. Possibly infecting beings that eventually take the sickness back to their home plane and start infecting others outside of Oinos.

The grey mists here are thick and ever-moving. Causing obvious detriments to sight as well as hearing due to how thick the fog here truly is. It brings a density to this layer. While it doesn’t impede movement, a creature moving through the fog would definitely feel how dense it is.

While this layer does not often see the conflict from The Blood War due to the mist making for poor battle conditions, there are creatures that lurk within the mists that prey upon those who may be trying to escape the conflict in the layer above. These beings are normally twisted versions of creatures that would be found on the material plane, such as wolves or goblins with fiendish features.

Within the mists of this layer, exists a town, a very fortified and well-guarded town called Death of Innocence. Bit of an edgy name, but hey, we’re in Hades after all. This town is protected from the mists of the outside and is run by a large group of mortals and petitioners.

Interestingly this town is maybe the only place in Hades where one can find relief from the soul-draining effects of this plane of existence. Beings here even try to improve their own lives and the lives of those around them, which is the antithesis of this plane.

It is said that the wood the buildings and town walls are made of often ooze blood, which some have said is an indication that the trees surrounding the town contain “living” petitioners. Which the townsfolk cut down and use to build upon the town. So you may want to avoid wearing anything that stains easily.

The lowest Gloom of Hades. This layer is made up of blackened thin dying trees. It is often untouched by The Blood War, although small groups of fiends from either side have ventured here to capture the souls of important figures if they think it will assist them in the war effort.

The main attraction here in Pluton. A massive structure that is said to stretch out for thousands of miles. Made of what looks to be bone, and with a single entry point, a large bronze gate, which is dented and scuffed, the damage said to be done by those attempting to retrieve the souls of those they’ve lost and loved.

The gates are not the only thing blocking the entrance here. A massive three-headed dog, said to be made up of the decaying bodies of petitioners, guards the gates here.

Inside is said to be much the same in terms of landscape. Just a greyscale wasteland. However, there exists countless Larva here, which I’ll explain later, but all you need to know is that they’re a special type of Petitioner here on Hades. The Larva writhe and wriggle all over this area.

Just like all the other Outer Planes, the souls of those who have died can end up here based on their beliefs and who they worshiped in their mortal lives. Usually, the ones here are often spectral in nature, growing most intangible as their very essence is drained from them by the plane itself. They typically do not speak, and often gather around mortals, basking in the emotion the mortals give off, like a lizard in the sun.

For particularly selfish beings that end up here, there is a special type of petitioner that they can become. These are known as Larva. These medium-sized worms (so we’re still talking like 4-6ft long worms here) possess the head and face that the being had in their mortal life. However, they are left to just wallow in the dirt of the grey wastelands, until eventually succumbing to the Planes draining nature and becoming one with it.

Interestingly, however, Larva are often highly sought after by those who dabble in dark and powerful magic. Liches, Hags, Demons, and Devils all use Larva as part of rituals, effectively using them as soul sacrifices. It is said that Larva can be used by those of the same ilk to trade between one another, almost like a currency.

As mentioned previously the Oinoloth is the title given to the ruler of Khin-Oin The Wasting Tower in Oinos, the first layer of Hades. The current Oinoloth is known as Mydianchlarus, an Ultraloth and Prince of the Yugoloth. This title can be claimed by anyone, however. To attain this title, one must slay the current Oinoloth, and take their place.

When a being becomes the Oinoloth, a section of their skin will slough off, and this change is said to be permanent, regardless of spells used to reverse it, at least while still holding the Oinoloth title. The Oinoloth is the only being with the ability to sit upon the Throne within The Wasting Tower, known as The Siege Malicious. This grants the Oinoloth the ability to create, edit, and control disease itself. Creating new diseases, changing existing ones, as well as the ability to infect anyone within 300ft of them while on Oinos.

What is Hades in DnD 5e?

To sum up the post, Hades is an outer-plane that is the central stage for The Blood War. It is split into three layers, known as Glooms. Colour is extremely rare here, almost everything from the sky and the ground below is grey.

How to Get to Hades in DnD 5e?

There are various portals that lead to Hades, it’s a rather popular destination due to The Blood War. As well as having the river Styx flow through it as well, the fiendish ferrymen that pilot the ships on the river will be happy to take you to Hades, for a price of course.

So before doing the research for this post, I wasn’t sure what to think, but wow I was really intrigued with how Hades is portrayed in the books. I hope you gained as much insight as I did. It’s a pretty cool location, with some unique stuff going on, all while being the grand stage for the Demon versus Devil war.

So for sure give this one some consideration when deciding where to take your merry band of Murderhobos next on their adventures. Until next time, I hope your week is a Critical Success!