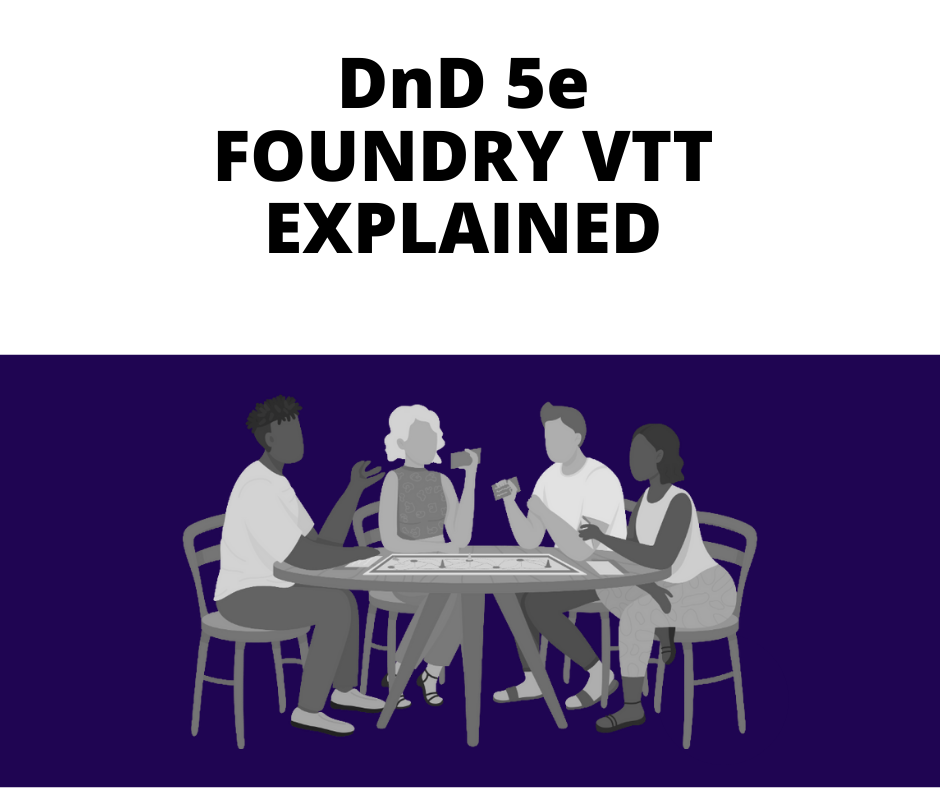 Hey folks! So in this week’s post, DnD 5e Foundry VTT Explained, I want to talk about my journey so far moving from Roll20, to Foundry VTT, and my advice for people who might be looking to do the same.

So let’s waste any time and jump into what I think has been one of the best decisions I’ve made in my GMing career.

What is Foundry VTT?

If you’ve ever played DnD online at any point, you’ll have likely used one of the many virtual tabletops (VTTs). Personally, I’d say the one I see most people use currently is Roll20. Now as the years have gone on and more people have developed their own VTT solutions, of which, Foundry is an up and comer.

So with Foundry, you buy the software once, and that’s it, as the GM you pay around $50, I’ve seen some groups all chip in together to cut the cost a little, but it’s no more expensive than a modern video game. Once purchased that’s it, no other fees or anything.

The GM then has the option of using the software directly from their own home computer/laptop as and when it’s needed, just launch the software. Then you send your players the link that gets auto-generated within the software, and they are able to join seamlessly.

There is another option where you can purchase virtual server space from one of the various cloud providers online, AWS, Azure, something like that would work, although there can be annoying costs involved in that. You can also always host it on your own physical hardware, either just a computer that you keep on 24/7 or something like a RaspberryPi can also happily host Foundry.

You might be thinking, “I already use X, why would I switch?”. Well, Foundry does something unique that I’ve not seen any other VTT do. Foundry has modules, which are typically created by members of the community to add additional functionality to Foundry, making the tools at your and the player’s disposal, much more powerful.

If you’ve ever played any games and added mods to them, say for instance Skyrim. Then it works almost exactly like that. You find something you like the look of, and then install it, which is an extremely easy process.

However, even out of the box Foundry can pretty much everything any other VTT can do, plus more, at least from my experience. Its interface feels much cleaner, it effectively pays for itself after a couple of months due to it being a one-time expense.

How Does Foundry Compare to Roll20?

My experience in GMing has pretty much always been Roll20, or physical. At the time most other solutions just felt cumbersome compared to Roll20, but as time has gone on new contenders have entered the arena of VTTs and honestly, I think Roll20 has let it slip, and I say this as someone who used it for about 10+ years.

Foundry, even out of the box was just a breath of fresh air. The UI felt so much better. The tools out of the box felt a lot friendlier and even doing simple things allowed me to understand just how powerful the tools can actually be when you take the time to build the scenes and token libraries.

Let’s go over the pros and cons of Foundry compared to Roll20, and maybe I can help improve your DnD experience as well.

As mentioned, with Foundry there is an enormous number of modules you can download and install that will take your online games up a notch. There are modules that make running the game easier or allow for additional features that increase Foundry’s functionality. Honestly, if it’s something you can think of, someone has probably made a module for it.

That’s right! No subscription fees or anything. You pay the Foundry team once, and the software is yours to use. As a GM you just run the software on your device after you’ve purchased it. Your players don’t need to pay anything at all.

So over something like a Roll20 sub fee, we’re talking 10 months on the basic plan or 5 months on the highest tier plan before Foundry would have effectively paid for itself.

Not just that, their discord community is fantastic, if you ever have trouble, I’ve always been able to get some assistance from there.

The folks at Foundry are always working on something new. You can see on their various social media locations as well as the discord to see what they’re working on. They also often do live streams on Twitch to show off their new features.

As of writing this, they had recently just shown off their new vision system which will allow GMs to actually give players Blindsense, or Tremorsense. Which looked really cool. So, you get a really cool insight into what they’re working on and what they’re excited to show off.

Can be Complex to Setup

Compared to Roll20, as the GM, Foundry might be a little more complex to set up, depending on how comfortable you are with learning new software. There is also a little bit of tech knowledge required when troubleshooting issues that may arise.

With the tools at your disposal, it can take a little bit of time to start using them to their full potential. I know it took me a handful of sessions before I even realized how to use the lighting system properly. Although, I will say, once you do get used to them, your players will be in for a whole new experience.

You can’t really try it before you buy this product. They do have a demo but it’s hard to get an idea of what you can do with it when you don’t have a blank canvas to play with. If they gave a two-week free trial code, I think that could benefit them. Until such a time, however, you basically need to take a bit of a risk and hope that the product is a good fit for you and your table.

Not All Modules Are Compatible

Since there are so many Modules within Foundry, and a lot are community made, not all of them will be compatible with one another, some may step on each other’s toes, so to speak. This can cause issues with the game functioning properly. So you need to be a bit aware of what you’re installing and try not to have overlapping features.

There are Modules that can help detect problems easier, but they can take a bit of time to use. So just keep in mind that if you’re just installing every cool Module you see, you might run into some issues.

So I’ve been running this for about a month, and here are the modules I think have really allowed me to change up how I GM in a virtual space to make things a lot slicker.

This module improves the status effects of various spells and conditions within 5e. If you install this and the modules it recommends, then you get some really cool things happening. For instance, one of the players casts Holy Aura, which along with providing certain bonuses to the player and their allies, the spell also causes the player who cast it to give off a little bit of light. With this module when you apply the Holy Aura buff to the target, it will automatically change aspects of the player’s character sheet, as well as allies in range, and will automatically revert them if the allies go out of range. As well as that, the token will also automatically give off the appropriate level and range of light.

Not only that but you can add custom effects, with specific triggers that you set up, and can customize what they might change on a person’s character sheets!

My players have been wowed with this a lot, applying effects to targets that show up in-game without needing to keep such close track of them is a godsend for speeding up combat and allowing players to plan at a glance. Download DFreds here.

This is a simple one, but one I felt I needed from my time on Roll20. It allows you to simply be able to drag a token from your local machine to the VTT and then it gives you the option of importing it as a simple token, or as what Foundry calls “Actors” which are tokens with character sheets attached and are for your re-occurring tokens. Download Drag Upload here.

Another simple yet useful one. This adds a tray at the bottom of your chatbox so you can quickly select dice to roll. It’s useful for those random manual rolls that can come up with in any given game. Download Dice Tray here.

This is a really cool one, it pop-out a window to your screen, in this screen is a customizable grid, so you can set how many squares of the grid are useable. Within these sections, you can add character sheets, notes, or basically anything you have within Foundry to those sections. It’s super useful so you can keep your screen clutter to a minimum. Download GM Screen here.

This is an insanely cool one if you’re looking to have your players able to explore multi-level maps without having to manually drag their tokens. So basically it allows you to place down an icon that is clickable by the players when their token is next to it. That icon links to another icon either on the same map or on another scene completely. Clicking the icon will take the player’s token and transport it to its counterpart. So it means even if you have say a massive castle with multiple levels to it, you can let your players explore without intervening. Download Stairways here.

So that’s my thoughts on Foundry so far. I think it’s been a fantastic journey so far, I’m so glad I eventually bit the bullet and decided to just try it out. Even a month later my players still talk about how much cooler Foundry is, which is really down to how intuitive the tools are for me to use. I can consistently wow my players, and I also get the added benefit of having a constant stream of new content in the form of modules, plus regular updates from the main Foundry team as well. So I give it my wholehearted recommendation! So until next time, I hope your week is a Critical Success!