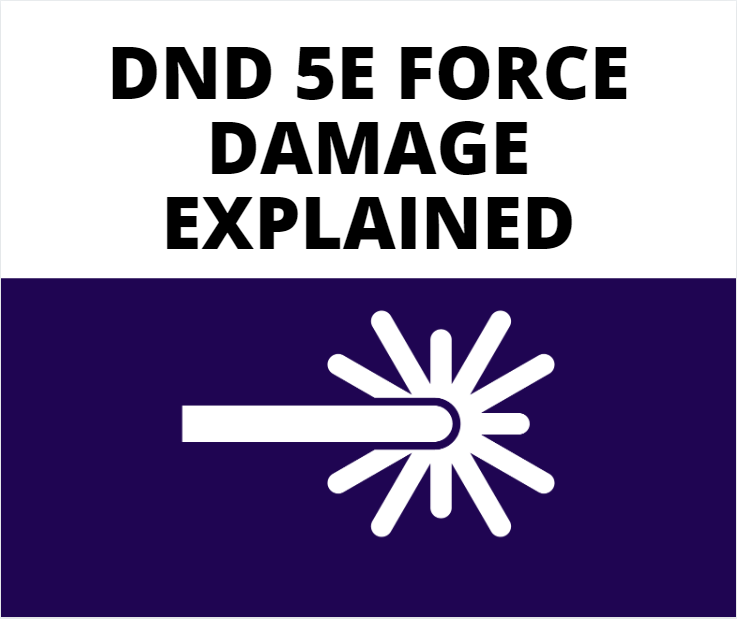 In this post, DnD 5e Force Damage Explained, we’ll be taking a look at Force Damage and how it may show up in your games as well as some ideas on how to describe it for both DMs and Players.

So let’s have our quick dive into how Force Damage could show up in your game.

Force Damage is almost like the building block of damaging spells, at least that’s how I envision it. It is pure magical energy before any of the elemental damage types are added to the spell.

Due to it being more of a building block, it’s actually rare to see force damage, in fact, there are only a few places you would actually see it.

Any creature with incorporeal movement, meaning they can phase through creatures and objects are all capable of inflicting Force Damage.

When a Ghosts, Specter, or Will-o’-wisp phases through another creature, they actually inflict Force Damage on that creature due to that creature’s magical essence passing through the targets body.

Think along the lines of a wave of magical radiation whooshing through the target creature’s body.

There are also creatures that are able to fire beams of pure magical energy which also inflict Force Damage.

Beholders, Beholder Zombies, or Death Tyrants are capable of shooting those beams of pure magical energy. They use one of their eyestalks to fire a beam called a Disintegration Beam, which does pure force damage to the target.

If it drops the target to 0 HP using this eye beam, it also causes the creature to turn to dust instantly, bypassing the unconscious condition

Force damage isn’t very naturally occurring; it is however a little more frequent in spell casting. Like previously stated, Force Damage is pure magical energy given physical form. Let’s have a look at some of these spells.

One of the early Force Damage spells is

Eldritch Blast, taken pretty often by Warlocks everywhere. It shoots a simple beam of pure magical force at its target. Which impacts on them causing the target to take force damage.

Now imagine a more concentrated version of Eldritch Blast, one with more power and skill behind it, that would be our next spell

Disintegrate. It too fires a beam of pure force energy but hits a lot harder. It also has the benefit of having the same effect as the beholder ray, if it drops the target to 0HP it turns them to dust.

There is also the very iconic spell to DnD and other RPGs, both video game and tabletop

Magic Missile is another rather simple spell, but it is also a very iconic DnD spell, the image of the Wizard firing these unmissing bolts of pure magical energy when hit their target(s) they inflict force damage.

An interesting case is with certain magic that can move the caster, such as

Dimension Door. If the caster uses this spell and the target location they pick, it occupied with either another creature or an object, like a crate or a wall then the caster of the spell will be shunted to the nearest unoccupied space next to their target location but the caster would also take some force damage for momentarily being entwined with another physical object.

There are of course other spells that cause Force Damage because it is the “purest” form of magical damage, but those spells cover most of the use cases in the game.

If a creature is passing through another creature, the damage isn’t really even seen, it just kind of happens. Usually, I describe this as a cold feeling, that chills the very soul of the target creature.

If it comes from a beam, then that really depends on the creature casting the beam. If someone was a Fey warlock they may have a more vibrant color of beam, reflecting their fey nature.

A Beholder casting it? Then I’d describe it as a beam of pure inky blackness, reflecting the evil nature of most Beholders.

A Wizard casing Magic Missile I’d describe as having pink/purple color and being like small crystal darts or spears. I do this as in my head cannon, pure magical energy without some kind of influence from the castors nature is pink, purple, or colorless.

So that’s our quick dive into Force Damage. Hopefully, it’s helped you understand how this kind of damage will show up in your game and how you can get a little creative with the descriptions.