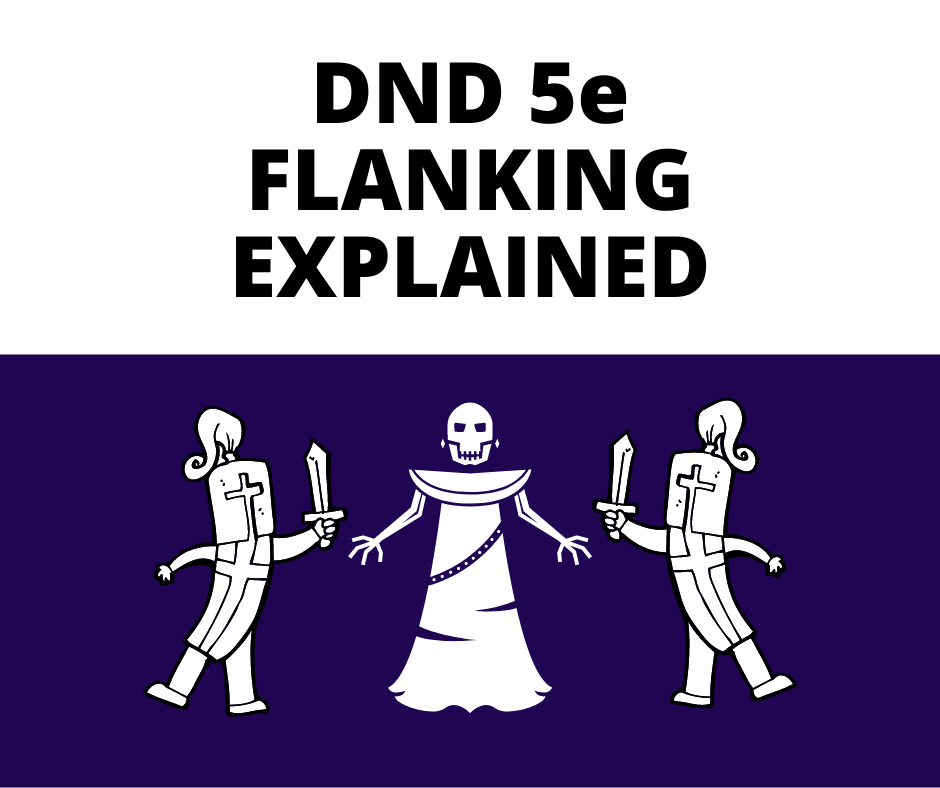 Hello folks, in today’s post, DnD 5e Flanking Explained, I’m going to quickly explain how this DnD mechanic works. It’s an optional rule, but one that can add a bit more variation to the combat. So might be useful if you’ve been playing a while and want to add another layer of depth.

First I’ll go over how it works, then answer some questions on the mechanic.

So keep your eyes on your rear and strap in as we jump right into the post!

Flanking literally means “be on each or one side of”. We’re concerned with “on each” side of that description. In DnD the full explanation for the rule can be found on page 251 of the Dungeon Masters Guide.

However, for a quick explanation, it means when playing on a squared grid if two creatures are on opposite squares from each other with another creature in between them, then that single creature is currently being flanked by the other two.

When this happens, both creatures who are flanking, have advantage on their attacks against the flanked creature.

Is There Flanking in 5e?

Yep, sure is. It is an optional rule found on page 251 of the Dungeon Masters Guide.

Can you Flank a huge creature 5e?

You sure can. As long as two allies are on opposite sides of the creature of each other, flanking will occur.

Can you Flank with Familiars 5e?

Yes! A very strong combo. Since Familiars are considered allies then flanking with them will work fine.

Does Spiritual Weapon get Flanking 5e?

Yes and no. I know that’s a little strange, so let me explain. Spiritual weapon does not count as an ally, so it cannot be used to gain flanking on an enemy, but it can however benefit from flanking.

As always I hope you learned something today about Flanking and I hope you have fun if you decide to add it to your game. I actually only recently learned about the spiritual weapon interaction, which is interesting, but a very niche use case. Thank you for reading the post, and until next time, may your day be a Critical Success!