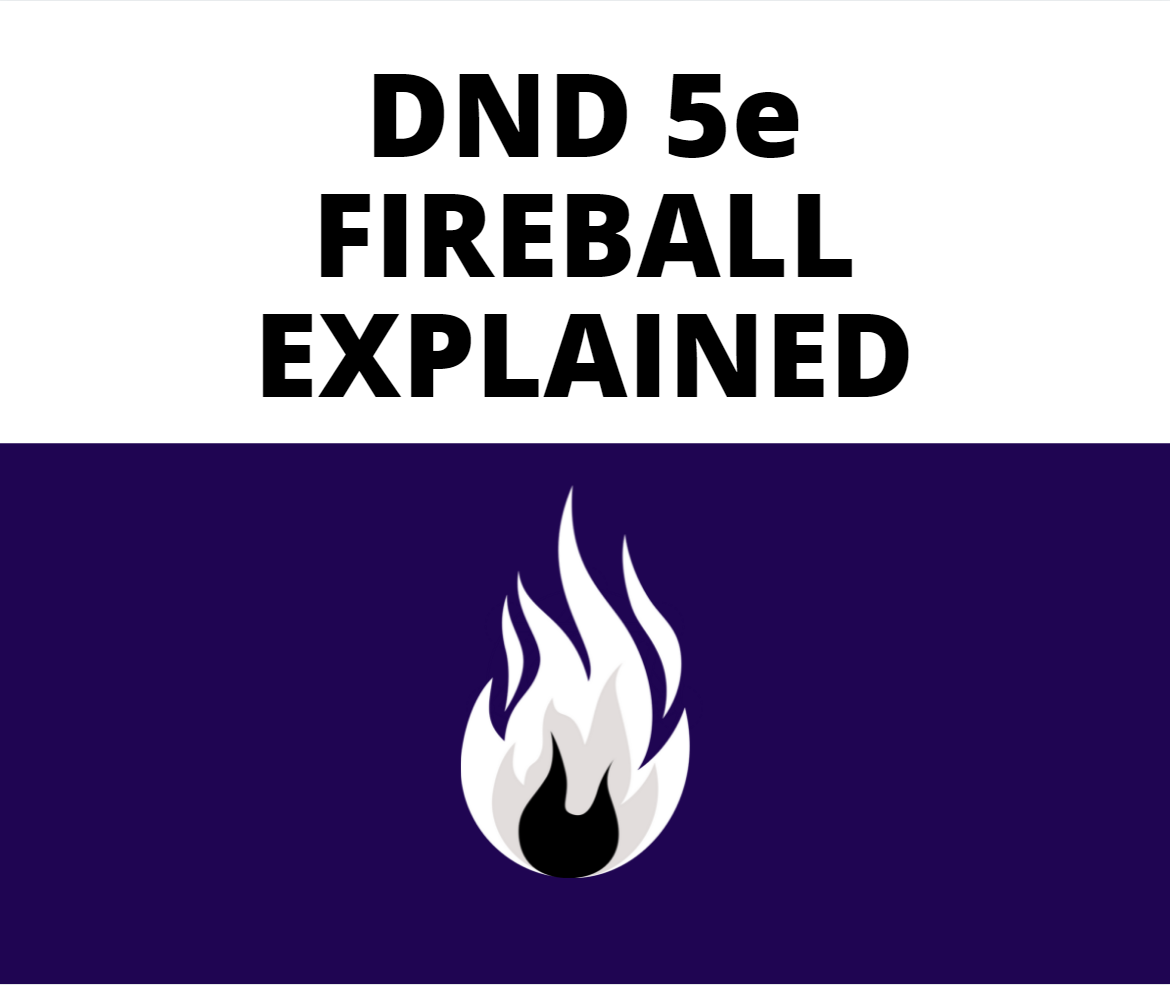 Hey everyone! Hope everyone’s having a good week! Today’s post is, DnD 5e Fireball Explained. A very iconic spell from the game. First, we’ll go over how the spell works, then describe a little scene in which it’s used, and finally, we’ll go over some common questions!

So get cozy and take cover from the fire and let’s discuss Fireball!

This spell is one that is as iconic as it gets for DnD. It’s not a complex spell or anything but I do have a couple of notes on the spell that may help people when it comes to visualizing it in their imagination.

First, though, we’ll talk about how the spell works. It’s a 3rd level Evocation spell, it takes 1 action to cast it, and it can be cast up to a range of 150 feet.

The caster points to a location within range, and that point becomes the center of a 20-foot-explosion. Everything caught in the radius must make a Dexterity saving throw, if they fail they must take 8d6 fire damage, or half if they succeed.

One thing I want you to note about the spell is that when it hits, it is a wave of fire that erupts. The caster isn’t hurling a flaming ball of fire. I’ve seen people confuse this, then ask if they can use fireball to break down walls and such.

The way it states that it works is a beam shoots from the fingertip of the caster and touches the point they want to be the center of the blast. From that point, a wave of fire erupts and roasts the creatures in the area.

Simple spell, but very effective for dealing damage to a cluster of enemies.

As is usual for our spell posts I’m gonna give a little scene using Fireball just to help allow people to visualize the usage of the spell in their heads.

The Ranger pops back around the corner and tells the team that there is a cluster of Kobolds praying to some kind of altar. About 10 she says. The Wizard cracks a smile and says that he’s got this one. He sticks his hand into his component pouch and grabs what he needs. He steps around the corner, points into the dead center of all of the kobolds, and says the right words. An orange beam shoots from his finger and starts to char a small point in the center of the creatures. Within just a moment a sphere of fire erupts from the charred point and the Kobolds are all immediately turned to ash, leaving behind their rusted and improvised weapons. The Wizard looks at his party, shrugs, and says “What? Was that overkill?

How many times can I cast Fireball in DnD 5e?

Fireball is at its base a 3rd level spell. It can also be cast at higher levels as well. So it really depends on what level you are and how many spells you can cast.

To know that, just check the table that exists at the start of your class page in the Players Handbook to know how many spells you can cast per appropriate rest.

Can you hit yourself with Fireball in DnD 5e?

You absolutely can hit yourself with Fireball. So be very careful where you choose to cast it. Also, be careful as it can hit allies as well.

Can a Warlock learn Fireball in DnD 5e?

They sure can. Warlocks who take the Fiend as their patron can learn Fireball at the appropriate level.

Due to the way magic works in DnD, yes Fireball WILL work underwater. Since it’s not a normal fire but a magical fire. However, keep in mind that if a creature is fully submerged in water, they have fire resistance. So they will automatically take half damage from the spell.

Well, that’s it for Fireball, one of my favorite spells in the game. Hopefully, it helped you understand the spell a little more, and hopefully, you learned something you might not have already known about it. So until next time, may your day be a Critical Success!