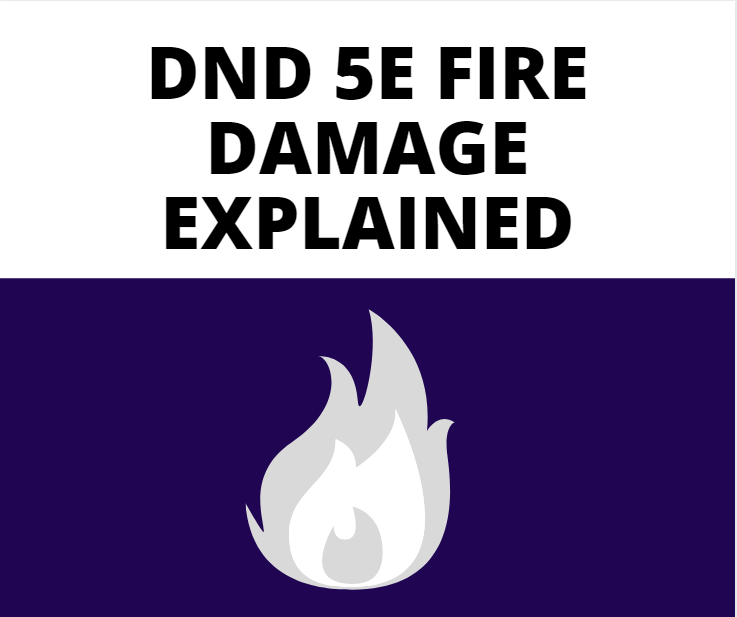 In today’s post, DnD 5e Fire Damage Explained, we’re going to have a little look at how fire damage can show up in your games. We’ll look at creatures and spells that can cause this type of damage.

I’d be hard-pressed to believe most of you don’t know what fire damage is and how it could turn up. It’s definitely one of the more obvious and straight forward damage types in the game.

In the interest of consistency, let’s explain it. Any damage that comes from high temperatures would be considered fire damage, this could be as simple as someone being lit ablaze, or having a firebolt flung at you, or maybe even a red dragon using its breathe weapon on you.

With all that in mind lets looks at some specifics.

The Azer are creatures made of pure living fire. They are effectively a race of their own. Their facial features and height make them look similar to dwarves, except the hair on their head and face are made of fire.

Due to them being literally made of a fire, they have a few ways to cause fire damage. One being that they have an ability called Heated Body, which means when a creature within 5ft of the Azer touches or hits them, the attacking creature will automatically take fire Damage.

They are also able to heat their weapons in order to cause fire damage when they make melee attacks.

There are other creatures that aren’t as closely aligned to fire damage that can cause it too, one unique way that it can be done is an effect that takes place when the creature dies.

Balor’s are one such creature. These huge demons, reminiscent of the Balrog from Lord of the Rings, explode when they die. When they explode they cause creatures within 30ft of them to make a Dex saving throw, which on a success allows the creature to take half damage. The damage the creatures take is 20d6. Which is a lot of damage, but being the creature has a very high challenge rating it can be expected to do a lot of damage.

They also have a Fire Aura ability which means any creature that is within 5ft of the Balor at the start of the Balors turn takes 3d6 damage. It also causes attacked to take the same damage upon a successful melee hit. Similar to the Azer.

Finally, what kind of post about fire damage doesn’t include one of the namesakes of the game, the Dragon.

There are plenty of dragons in the game, but arguably the most iconic being, the Red Dragon. These dragons can rain their fiery breath all over their targets. Keep in mind they’re not the only dragons that can use Fire Breath as there are other kinds of good-aligned dragons that can use it.

A red dragon can breathe out a 90ft cone of fire. Any creature caught in this must make a Dex saving throw, if they succeed the creature only take half damage. In its strongest form, the ancient red dragons fire breath ability does 26d6 damage. Pretty much guaranteed to wipe out almost anything in its path.

Fire is likely one of the most ubiquitous types of damage for spells in 5e. So there are a lot of options for players or DMs to make fire-themed casters. Fire damage comes in many forms when it comes to spells.

Fire Bolt is a simple cantrip. The caster effectively throws a small chunk of fire, about the size of a pebble or small stone, at the target. Along with most fire spells it also mentions it can set flammable objects of fire, if they’re not being worn or carried.

There are also defensive type spells that allow the caster to deal damage while also shielding them.

Fire Shield is one such example of a protection spell that can also do damage. This spell coats the caster in a light flame, which also illuminates the area around the caster. The spell also protects against either fire or cold damage (the caster chooses this when they cast the spell).

The damaging portion of the spell works by making it so that any creature that attacks the caster when they have the shield on them takes damage.

There are also spells that can literally rain fire down on an area.

Meteor Swarm is a very high-level spell in DnD, it summons four balls of fire from the sky, which can hit different points that the caster gets to specifically choose. Each ball of fire acts as a 40ft radius point of damage.

Creatures caught in one of the 40ft radius balls of fire, are forced to make a Dex saving throw, taking half damage on a successful roll. The damage they take is 20d6 fire damage as well as 20d6 bludgeoning damage. So it actually easily can out damage an ancient red dragon’s breathe attack. Which is why it’s such a high-level spell.

Like everything in DnD it all depends fully on the source of the damage, but the main similarities between the different sources is that it’s hot. Pretty obvious right?

Normally when I describe it, I like to talk about how the heat singes the hair and skin. Depending on the intensity of the attack, spell or natural source of fire damage.

Say an NPC casts fireball at the party, this is how I would describe it.

As the thin red beam shoots from the Wizards magical focus, the beam connects directly with the point the Wizard is aiming. A thin sphere of red hot fire radiates out from the center of the location the Wizard aims. You feel burn and roast your skin as well as smell it singe your hair and clothes. You take 28 Fire Damage.

Okay, so that’s been our quick look at fire damage. This damage type is very ubiquitous in DnD, there are many different ways it can show up in games. It’s a pretty straight forward damage type, and I’d say most of you could come up with unique scenarios where it may not come from a specific monster or spell.

Hopefully, you found the post useful, and thanks for taking the time to have a read through this post, and until next time, may your day be a critical success!