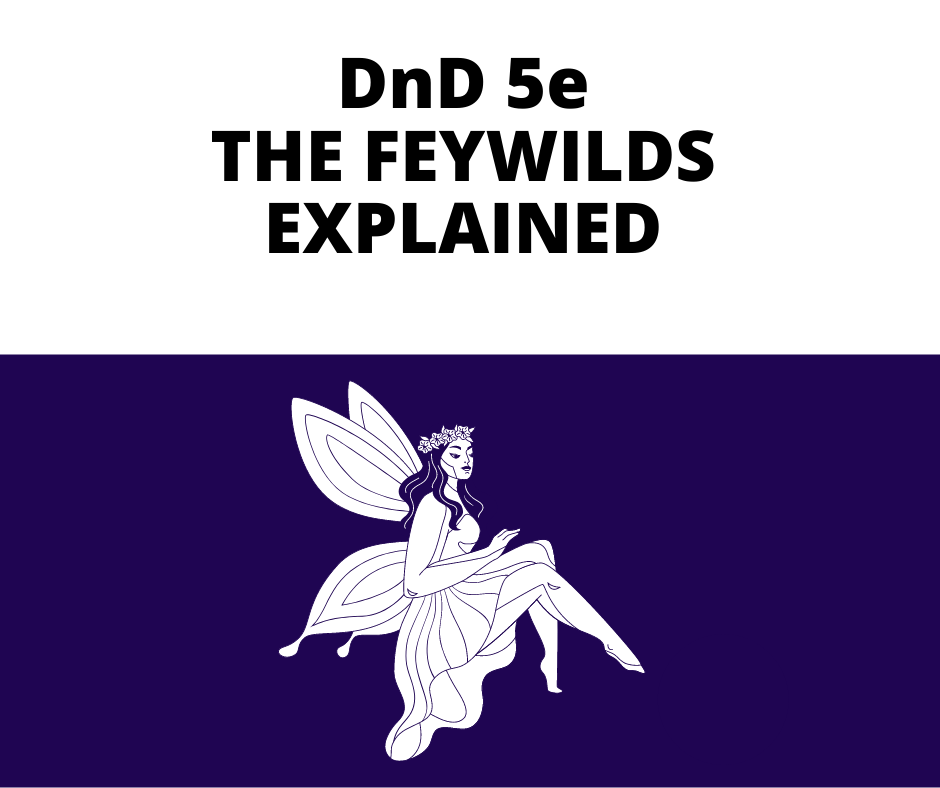 Happy Mid-January folks, I hope everyone is getting back into the grove, and keeping to your New Years Resolutions! In today’s post, DnD 5e Feywild Explained, I’ll be covering this truly awesome but very dangerous plane of existence.

So don’t let the Faeries sing you to an early grave, and keep your eyes on this week’s post as we dive right in!

What is the Feywild?

The Feywilds are the positive representation of the Prime Material Plane. Much like the Shadowfell is the negative representation. However, don’t assume just because it’s called positive that it’s a safe place, it is fraught with danger and trickery.

The Fey and ultimately the Elves originated from the Feywilds. Life flows through this land, and alongside life comes magic. Everything within the Feywiilds is magic, from the trees to the water. Due to this, there are masses of creatures that call the Feywilds their home.

Being the land of the Fey means trickery is usually always afoot. In this plane when something seems too good to be true, it usually is, or comes with a price. The only difference between a Sprite and a full-blown Fey is the stakes at which an encounter with one may present.

What’s in the Feywild?

The Feywilds is just as big as the Prime Material Plane and the Shadowfell, and due to it teeming with life it is filled with many notable locations. Examples such as these!

Or well, Sildëyuir. This is a bit of a strange place. It’s actually a demi-plane, created by the Star Elves to connect to their ancestral home. It is said that the land lay beneath a sky just before sunset, the land itself a forest untouched by man, the canopy of which is broken by massive glass citadels said to be built by the ancient Star Elves.

Who’s in the Feywild?

Those residing within this court served the immensely powerful archfey known as Titania, the Summer Queen. Seelie Fey are often amicable and considered good-natured creatures, although as is with all of the Feywild, expect a bit of Fey mischief.

At odds with the Unseelie court as both represent the good and evil sides of the Feywilds. The Seelie are unwelcoming to outsiders, so gaining their favor is not easy, if at all possible.

Those residing within this court served the undeniably powerful archfey known as the Queen of Air and Darkness. These creatures known as the Unseelie sought darker dreams for the Feywilds. They represented ways that lead to death and great sacrifice to prove worth.

The Unseelie’s main goal is to undermine the Seelie Court and undo any work they have done. They are much more welcoming of outsiders than the Seelie Courts but do not accept creatures such as Hags or Fomorians.

The Feywild is no strange place for powerful beings. Those that have no side in the war between the Seelie and Unseelie courts. Some have chosen to follow these Archfey instead as a different way of life. Being such as The Prince of Frost (Tatiana’s Son), Hyrsam (a powerful Satyr), and Oberon (The Lord of Beasts) to name a few.

Think of Hags like the Witches from fairy tales. They are powerful in the old ways of Magic, and often have plans that run deep. They are often very greedy for power. They can be very cunning, however, and will often offer trades with unsuspecting victims for parts of their soul.

These beings are half goat half man. They are often very neutral, often aligning with nature. They can be found in many locations across the Feywild, often they can be found being party animals, getting into all sorts of trouble, and for a Saytr, the more the merrier.

These creatures are the protectors of forests. They will defend their lands with might and magic. They are made of living plant matter and their appearance shifts with the seasons. Similar to Satyrs there are plenty of powerful Dryads that exist within the Feywilds.

Who rules the Feywild in DnD 5e?

Primarily it is ruled by the Unseelie and Seelie courts. Other areas may be controlled by particularly strong Archfey.

Is the Feywild Chaotic in DnD 5e?

Absolutely. It takes on all forms of Chaos. Due to the level of mischief even innocent creatures are capable of, it is definitely a place where you should keep your wits about you.

Things to be wary of in the Feywild in 5e?

Basic Fey stuff to avoid are things like entering into bargains with the fey, they usually end up with the better end of the deal. Do not share personal details, ESPECIALLY your name, names are powerful things to those that control old magic. Do not be baited by shiny baubles, the realm will try to trick you into going the wrong way, you must stay vigilant if you wish to survive.

How does time work in the Feywild Dnd 5e?

After spending more than a day or two within the Feywild, a time warp can occur when leaving the plane. This means that even if it only felt like days in the Feywild, on the Prime Material Plane years have gone by.

As is always I hope you learned some stuff about the Feywilds, I know I actually did. It’s a really cool place to take the party, a place where you get to mess with them a little bit, screw with expectations. Show how good and evil can look in a different plane of existence with vastly different cultures. Especially a place that likes to encourage petty revenge, and shenanigans.

So until next time folks, I hope your day is a critical success!