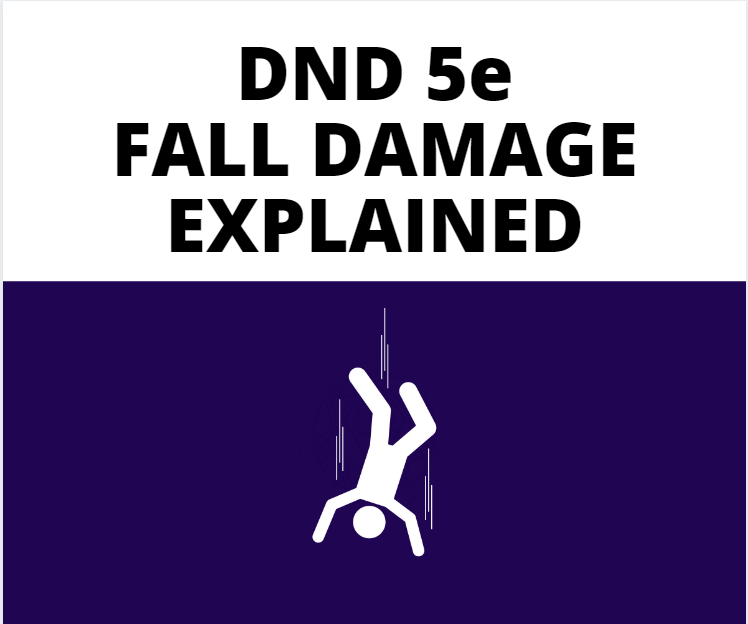 Happy Sunday everyone! Today’s post, DnD 5e Fall Damage, will be quite a short post, it’s a simple topic to cover, but one I see come up often. First, we’ll go over how it works, and then we’ll answer some of the common questions.

So hold on tight and try brace for impact while we go over this week’s post!

In DnD 5e falling can come from many things. You could drop through a trap door, or a spell could have elevated you and then dropped you, you may even have jumped off of a cliff and hurtled towards the ground.

Regardless of the situation, it’s good to know how to calculate and roll for falling damage. As I mentioned, it’s very simple. Basically, for every 10ft, a character falls they take 1d6 bludgeoning damage. The rules also state that it maxes out at 20d6 (or 200ft).

Yes, in fact, it does. The Barbarian ability known as Rage gives resistance to a number of damage types, one of these is Bludgeoning damage. When a player falls from a high enough height to take damage, that damage is bludgeoning damage.

There are a number of ways to stop falling damage in DnD. Featherfall, the 1st Level Transmutation spell is probably the most notable and specific to this task. Which slows the descent of its targets quite significantly, and if they land before the spell ends, they take no falling damage.

Short but sweet post this week on a topic that comes up often enough. Hopefully, this post has helped simplify this aspect of the game. So until next time, may your day be a Critical Success!