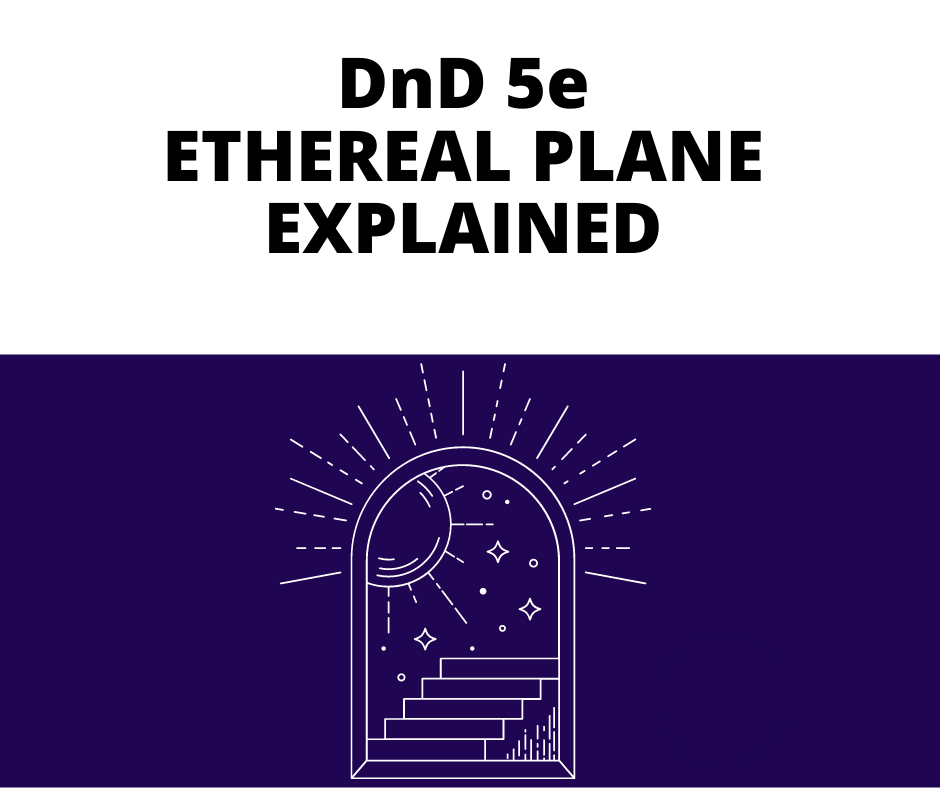 Good morning folks, I hope you’re all well! In today’s post, DnD 5e Ethereal Plane Explained, I’m going to be going over the various aspects that make up this border plane.

So without further ado, make sure you have the force of will to traverse this post and let’s dive right into the Ethereal Plane!

What is the Ethereal Plane?

The Ethereal Plane is what is known as a border plane. This border plane wraps around the material plane and connects it to the inner planes via the Deep Ethereal. The best way to conceptualize it would be something akin to an astral realm. A realm that exists in tandem with the material plane, but cannot be seen by the average person.

Since the plane exists within the Material Plane, you could be standing next to a friend while they were on the Material Plane and you were on the Ethereal Plane, they would, however, be unable to detect your presence, unless they had special abilities/spells/equipment. While in the Ethereal Plane, traversal is much the same as the material plane, except there is no real sense of gravity, but there is a sense of up and down. This allows beings in the plane to float.

Solid objects on the Material Plane can be passed through while on the Ethereal Plane. Walls and structures with no life essence are free to pass through. Anything that could be considered alive, including even plant matter, cannot be passed through, making dense woods a cumbersome place to be in the Ethereal Plane, since you would be unable to float through the trees or plants there, it would have to be traversed slowly, or bypassed entirely by floating above or potentially below it.

What’s in the Ethereal Plane?

There is not a huge amount within the Ethereal Plane, since it does not have its own dedicated space in which to build, and it does not have any way of supporting life. Not that it’s hostile to life or anything, but you cannot grow plants, or collect water while in this plane, so it makes supporting even something as meager as a village would be extremely hard.

This is the deeper part of the Ethereal Plane. To get here there are various passageways, each entrance to the passageways has a color, these colors represent the Plane of Existence that the passageway led to. Such as the Elemental Plane of Fire being a Red passageway.

These passageways, also known as Curtains, lead to the Deep Ethereal, and eventually to the Plane of Existence the Curtain represents. While in the Deep Ethereal, time slows fairly drastically, to about one-tenth of what it is on the material plane. This means one could theoretically live ten times as long within the Deep Ethereal than on the Material Plane.

Who’s in the Ethereal Plane?

Not a lot exists here, it is more or less purely for traversal to the other planes. That’s not to say that in your world, there might be a group of beings that decide to live here in order to extend their life span. Possibly a group of Monks attempting to reach enlightenment. However, other than your own creations, nothing officially exists here.

Does The Ethereal Plane exist in 5e?

Indeed, it does. 5e typically uses The Great Wheel Cosmology, in which you can see the Ethereal Plane wrapped around the Material, Feywild, and Shadowfell Planes.

How to get to the Ethereal Plane in 5e?

There are a few methods of getting to this plane. The spells Etherealness and Blink can transport you to the Ethereal Plane for a limited time. I believe Plane Shift should allow you to get there as well.

Can you see the Ethereal Plane in 5e?

With the Spells See Invisibility and True Seeing one can then see the Ethereal Plane, almost like an overlay over the Material Plane.

As is always the case folks, I hope you learned something from my ramblings, and please don’t hesitate to reach out if you have. The Planes are really cool places that can and really should exist within any campaign setting as it just provides much more to the makeup on that setting.

Well, until next time, I hope your day is a Critical Success!