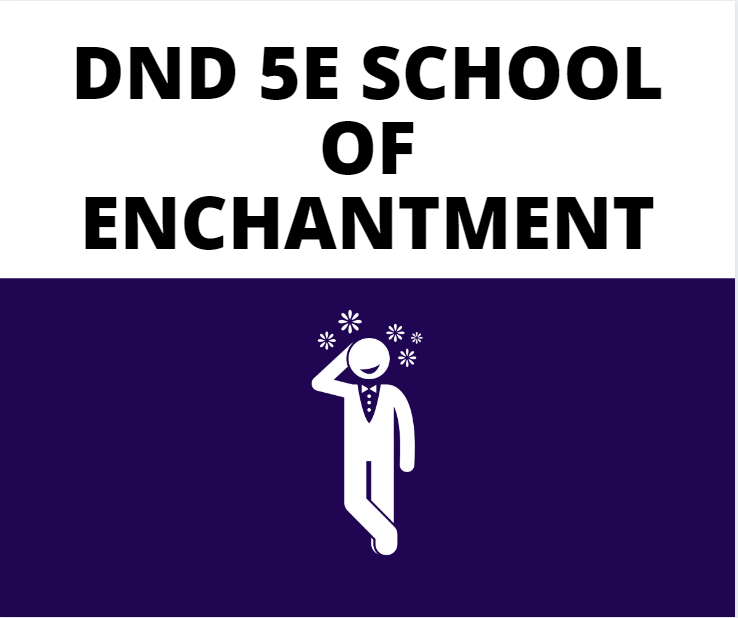 What’s up everyone? In today’s post, DnD 5e Enchantment School of Magic Explained, we’re going to have a look at the mind-bending school of magic known as enchantment. First, we’ll look at a quick intro to what this school of magic covers, then look at some specific spells, then I’ll explain and give an example of how I would describe these types of spells.

Have you ever hung out with someone, or watched someone online who you just couldn’t take your attention off of? One of the ways we describe these people is using the term enchanting. This is where this school of magic comes from.

These spells can influence people to like you more and to obey your commands, they can also do the same for animals and at higher levels even monsters. As a general rule if a spell affects the mind of a creature, then it’s very likely to be an enchantment spell.

As mentioned above some enchantment spells have the ability to influence someone to obey your commands.

Charm Person is such a spell. This spell allows you to force a creature to make a Wis saving throw (which it has advantage on if its currently in combat with the caster) if the creature fails it is considered to be under the charmed condition. While charmed the creature then regards you as someone it’s friendly towards. Remember, this doesn’t mean they consider them actual friends, just that the creature has a friendly disposition towards the caster. If the caster or the caster’s friends do anything harmful to the creature, then the spell ends. When the spell ends the creature also knows it was charmed by the caster.

On the higher level scale of things, we have ones that allow you to more or less completely control a creature.

Dominate Monster is a high-level enchantment spell capable of casting a powerful charm over ANY creature in the game. If the creature fails its Wis saving throw, it is considered charmed by the caster. The two then form a telepathic bond, which the caster can use to control the creature without using their own actions. The charmed creature will obey all commands given to it to the best of its ability. This spell is best suited for roleplaying situations as the creature makes a new Wis saving throw every time it takes damage.

With this type of magic being very invisible, being that it mostly takes place in the mind, I like to add flavor that would be hard to spot unless you were the target. So for instance, I like to describe the Charm Person spell as having the caster’s eyes make a hypnotic pattern, that entrances the creature.

Let’s say a Wizard casts Feeblemind on an evil mage, that has been messing with the party for some time. The Wizard doesn’t want this person to ever be a thorn in their side again and decides to destroy the mage’s mind. Let’s assume the evil wizard fails his throw.

You raise one your hands to your temple and lock eyes with the evil Wizard. You see a moment of fear run through his eyes, betraying his calm, and collected demeanor. You focus all your arcane power, draw the arcane symbols in the air, and blast an extreme wave of magical energy into the mage’s mind. You deal 16 psychic damage to the wizard and you feel his will break. He takes a few steps back and starts making unintelligible grunts as he looks around the room. He points at you and you see a primal rage fill his eyes which were once filled with intelligence. The feeble man runs towards you and attempts to attack you with his fists, but it’s ineffectual. The Wizard is now a shade of his former self.

As always I hoped this post helped you understand the school of enchantment a little more, and will help you when it shows up in your games. In my opinion, with how it can influence other creatures, it’s the scariest type of magic, far more powerful than something like necromancy, which has an evil stigma attached to it. Enchantment used in the right hands could influence a king and a realm.