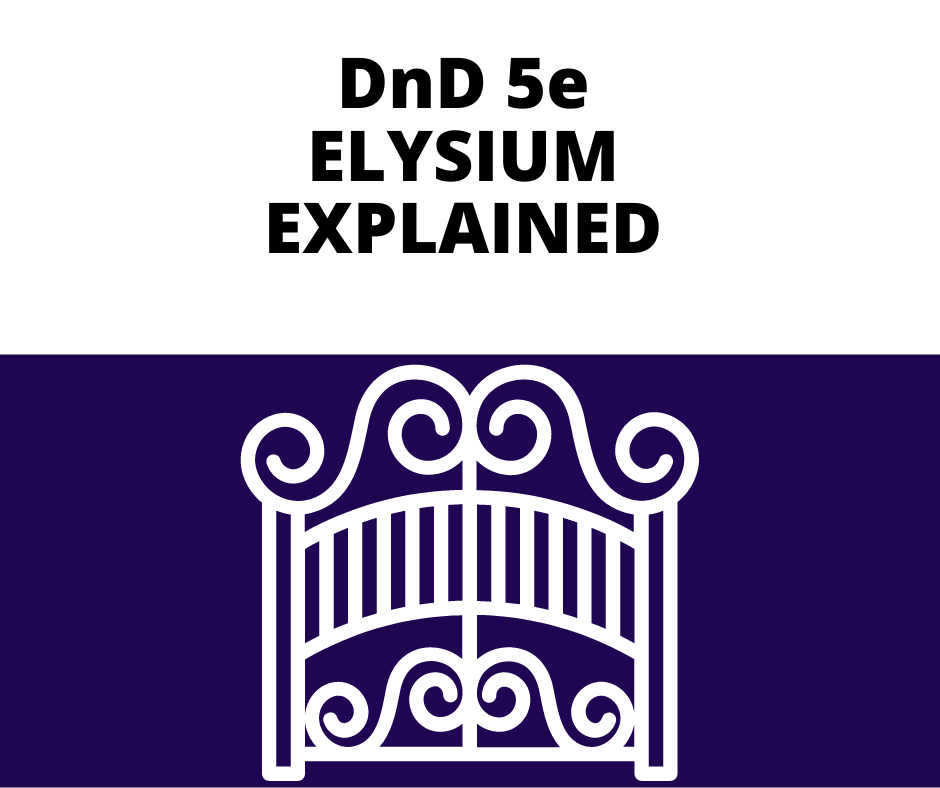 Hey folks! Another week another post. This week’s post is, DnD 5e Elysium Explained, in which we’ll take a bit of a dive into the holy lands of Elysium. As always, this is just an exploratory post, you have every right to change, ignore and add to anything I say here on these subjects.

So make sure you’re on the good side of the cosmos as we dive right into this week’s post!

Considered the place of ultimate goodness. A land so pleasant, you may never want to leave. So much so that outsiders have been known to be trapped there due to the soothing tranquillity that this plane gives to your soul.

Elysium is made up of four layers, Amoria, Eronia, Belierin, and Thalasia the four of which are connected via a river called River Oceanus, creatures of all kinds can be found all along the river banks of this massive river.

The first layer, which is where most inhabit, is vivid in color and can bring even the most war-hardened Orc to tears. The sights, the sounds, if serenity was a place then it would Elysium. The second is more mountainous, less habitable than the first, but not by much. The third layer is a massive marsh teeming with life. Lastly, there is the fourth layer, which is a great sea, it is said that legendary heroes of old are able to relax on the islands after they pass on from the material plane.

As mentioned Elysium is split into 4 separate layers. I’ll go into a bit more detail on each of them below.

Considered one of the most hospitable places in all of the Outer Planes Amoria is a greatly tranquil place. The beings that call this place home are beings of true goodness, often they will genuinely do the whole when life gives you lemons thing. When disaster strikes, the beings here will often spring into action helping those in need, often putting others way before themselves.

The beings who live here often live along the banks of the River Oceanus, forming small towns and villages. Travelers here will quickly notice that the people here do a lot for one another, so they will find often small and almost insignificant tasks being asked of them. However, by helping and falling in line with the way of the land, travelers will quickly find themselves new and powerful allies.

This part of Elysium is much rougher than the previous. It is said that this land was created for those who still wish for a challenge in their afterlife. The land is more inhospitable, being made up of mountainous terrain. On the plateaus and near the River Oceanus is where communities tend to congregate. Sheltering them from the windstorms, lightning, and snowstorms which are common here.

Still being part of Elysium, the sights themselves are still beautiful, massive mountains going way passed the clouds above. A perfect scene for those that don’t want to retire peacefully after they move to the afterlife.

One layer you may not wish to visit is Belierin. Often depicted as the prison layer of Elysium. This murky swamp is often filled with fog, and even evil creatures not native to Elysium. Those creatures may be prisoners here, or they may be launching attacks on this layer. The Guardinals often have to fight back against constant attacks to this layer.

Still, it is in Elysium, so there are aspects of this plane that shine through. The fog itself gives off minor light and tends to gather around sources of light, almost highlighting them. So it can be easier to find the pockets of civilization that have formed here. Often these places are built near or at the base of the massive lighthouses here that pierce the fog and can guide travelers of the layer to safe-havens.

The source of the Great River Oceanus. This massive body of water is sprinkled with many islands that can house communities of good-aligned scholars and heroes. Some house single entities that did significant good in their lives prior to being in Elysium. It is said that those who dwell here are effectively on the shortlist for becoming powerful petitioners, or even becoming Guardinals.

This plane goes by many names, the Heroic Isles or the Hills of Avalon are just some of the names. Really hammering home, the idea that if you did significant good in your life, then this would be your reward when you left your mortal life behind.

The Fortress of The Sun

This is the known stronghold of the Deity Pelor, the Sun Father. One of the true greater deities. This massive golden citadel rests atop the largest island in Thalasia, Krigala, shining like a beacon. Visible from almost anywhere on Thalasia. It is from the highest spire where Pelor himself confers with his court of Guardinals, Planetars, and Solars on the ongoings in all of the planes of existence, and how to thwart the plans of those who would do evil.

From here he also influences all of Elysium, all creatures in Elysium are considered to be under direct sunlight, regardless of where they might be hiding within the plane. His presence in the plane also makes spells of the Sun domain and any using light maximize in potency. So for instance the Sunbeam spell would do its maximum damage within Elysium.

Elysium is filled with many creatures and beings. Since it tends to be the desired afterlife of many good-aligned creatures, there exist all walks of life from around the many different planes.

Honestly, anything or anyone who is good-aligned could end up here. So not just lawful-good but neutral and chaotic beings live here happily under Pelors light.

There are also many Celestials who live here, they tend to have golden skin and silvery eyes, radiate divine power, and are often rather noble beings. This also goes for the wildlife, many of the creatures here are Celestial versions of the Material Plane counterparts.

These are beings that have come to call Elysium home, either followers of deities that exist here such as Pelor, or ones that find the plane’s good nature to be the place they wish to call home. There are also being who become Petitioners by accident. The plane can have such an effect on visitors that they find themselves not wishing to leave. If there are evil actions on Elysium the Petitioners will take up arms. Evil on Elysium is punishable by death.

Consider these folk the guards and foot soldiers of this realm. There are more powerful creatures than these within the realm, but those are often being sent out to the other planes to thwart evil and fight in wars between light and dark.

They often come in one of two forms, Leonals and Avorlas, lion-like and Bird-like respectively. You’ll find them all over Elysium dealing with issues that may crop up caused by travelers to Elysium, or outsiders.

What is Elysium in DnD 5e?

Well, to sum up, the post, it’s a plane of existence known as an outer plane, the outer planes are typically home to the most powerful creatures in DnD. It is the plane of ultimate good, where good-aligned creatures may end up when they pass through to the afterlife. It’s basically Heaven to some degree.

How to get to Elysium in DnD 5e?

As per usual there are methods at the disposal of powerful mages. Being able to plane shift here makes it pretty easy to get to.  Although there is no known portal that leads to Elysium from the Material Plane. There are portals to and from Elysium from the other Outer Planes, such as Bytopia and The Beastlands.

As always I hope you learned a little about the greater cosmology of the D&D world from this post. I’ve mentioned before this series is a bit of a journey for me as well since I’ve not delved into the information for every single plane of existence, so some of this is new to me as well and is my own interpretation based on my research.

The Outer Planes are really awesome, and can really add to your game, so I wholeheartedly recommend letting your players find their ways to these places. Until next time, I hope your day is a Critical Success!