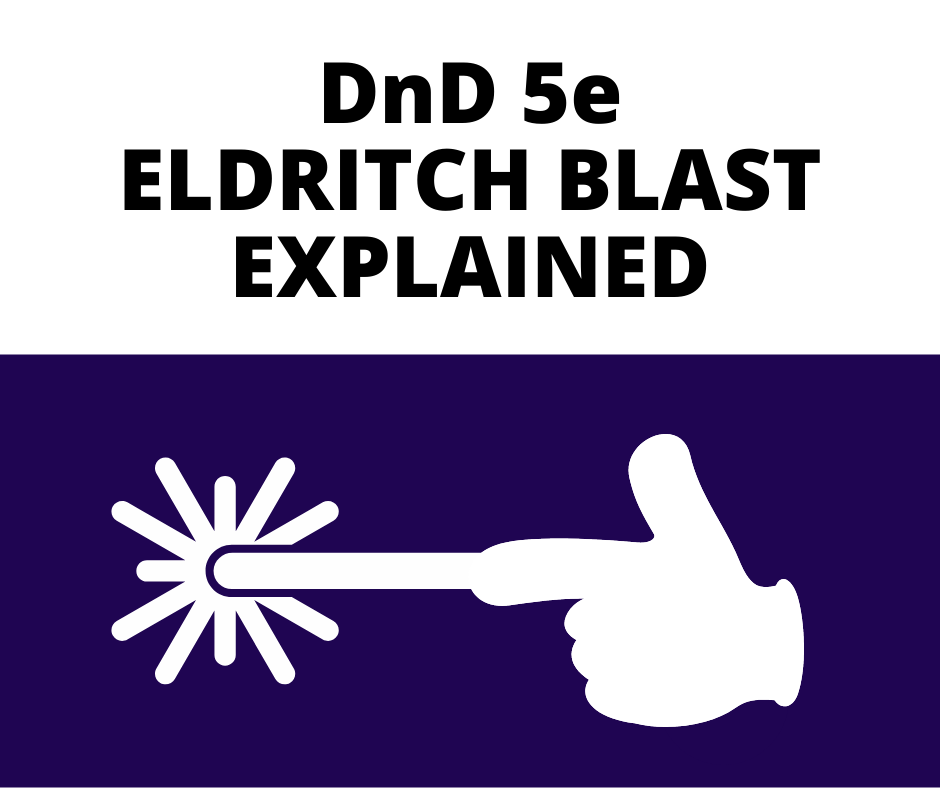 Happy hump day folks! In today’s post, DnD 5e Eldritch Blast Explained, I’ll be explaining just how this little spell works and why it can be such a massive tool in a Warlock’s tool belt. First I’ll explain how it works, including invocations, then I’ll go over how to use it, and finally, I’ll answer some questions surrounding the spell.

So keep your finger guns in their holsters as we jump right into today’s post!

What is Eldritch Blast?

Eldritch Blast is an Evocation Cantrip. It takes 1 action to cast, it can be cast up to a range of 120ft and can typically only be used by Warlocks.

The spell shoots a beam of force energy towards the target and if the hit is successful then the target takes 1d10 Force Damage. This spell, like other Cantrips, gets more powerful as you level up increasing the number of beams fired. These extra beams can be fired at the same target or different ones and require attack rolls for each separate beam.

Now the REAL interesting thing about this spell is that it can be modified if you are a Warlock. Warlocks have access to a feature called Eldritch Invocations which augment and change the way certain spells work or can give the Warlock a new spell or ability.

For Eldritch Blast there are Eldritch Invocations that change how the spell works or add more benefits to the spell. For instance, you have Agonizing Blast, which allows the Warlock to add their Cha modifier to the damage of Eldritch Blast. There is also Repelling Blast which makes Eldritch Blast push a creature up to 10 feet away in a straight line.

I encourage you to grab hold of the books as well as the additional content as they also contain additional Eldritch Invocations.

How to Use Eldritch Blast

Honestly, most Warlocks I’ve had use this spell as their default attack. It has great range, almost nothing is resistant or immune to Force Damage, and with the additional benefits from the Eldritch Invocations, it becomes easy to see why this type of Warlock build is so popular, really down to its simplicity.

Personally, I always liked the Repelling Blast and Agonizing Blast combo, if you have max Cha then you just start hitting like a truck when you gain extra beams. Plus, knocking something off a cliff is great fun. It’s a simple spell on the surface but there’s a good amount that you can do with it that really allows it to shine.

What Is So Good About Eldritch Blast in 5e?

Honestly? It’s versatile and will be a reliable damage Cantrip for a large portion of the game if not all the way from level 1 to 20. It can be modified to add features to it as well.

How is Eldritch Blast Better Than Firebolt in 5e?

Similar to the last question, Eldritch Blast can be modified to allow it to add the casters Cha modifier to the damage, or push/pull targets or increase its range.  Not to mention that as it levels up it adds more beams, which isn’t just raw damage like Firebolt gets as it gets stronger, it allows the caster to target multiple creatures, it’s almost a mini AoE spell. That in my opinion makes it better than Firebolt.

How Do You Get Eldritch Blast in 5e?

You typically need to be a Warlock to get access to it. Although I’m sure there can be clever use of feats to gain access to it. Such as Magic Initiate.

How Does Eldritch Blast Work at Higher Levels in 5e?

The spell itself tells you that when you reach certain levels the spell gains additional beams. Which can be shot at the same target, or different ones. An attack roll must be made for each individual beam.

I both love and hate this spell. I used it early on when 5e came out, but ever since my games are always cursed with Warlock players who make this their main spell, which of course is fine, but I’ve seen the build so much!

As always I do hope you learned a bit about the spell and I answered some of your questions. So until next time, may your day be a critical success!