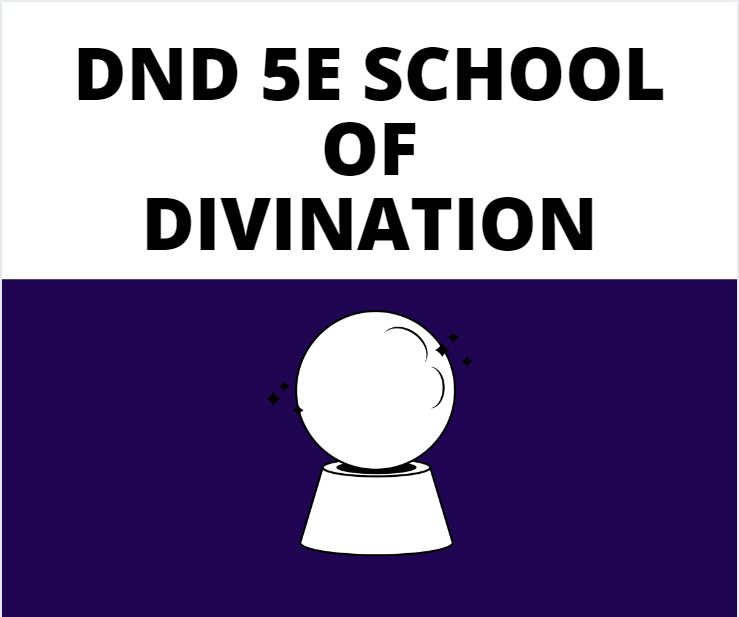 G’day all! In today’s post, DnD 5e Divination School of Magic Explained, we’ll be going over the very interesting school of Divination. First, we’ll go over a brief intro for the school, then a look at some specific spell examples from that school, and finally wrap it up with some ways I like to describe this type of magic.

With all that said let’s dive right in!

Divination magic is all about acquiring information or sharing information with allies. The spells in this category can do that in many ways, it might be the caster peering through the arcane to locate a creature or objects exact location. It could also be they glimpse certain information from visions, or invade the mind of another creature to steal said information.

This type of magic is extremely useful in all walks of life, typically I’d say you’d find divination magic users in a research capacity within organizations. However, it is still extremely valuable for an adventuring party. Since it allows them to identify what a magic item can do, locate important objects they may need to find, as well as being able to give themselves truesight for a period of time, allowing them to see through magic obfuscation, revealing secret doors and hidden text.

As mentioned above some of these spells allow the caster to understand more about magic items without having to trial and error them to figure out what they do.

Identify is such a spell. This spell allows the caster to touch a magical object, and as long as they are touching it for the minute duration of the spell, they learn the characteristics of the item. This means they learn how the item functions, if it requires attunement and if it uses charges (and how many charges it currently has). They also learn some lore about the item, such as if there are any spells affecting the item, and if a spell created the item, what spell created it. It can also be used on a creature to learn what spells are currently affecting it.

We also have very powerful divination spells that allow the caster to see the future, at least in some limited way.

Foresight is a 9th level divination spell, meaning it’s the highest level of spell anyone can cast. With this spell, the caster can see into the immediate future of the target. Doing so means the target cannot be surprised, they have advantage on all attack rolls, ability check, and saving throws. Anything attacking the target also has disadvantage on the roll. This spell lasts for 8 hours and isn’t a concentration spell, so that makes it extremely powerful in regards to the benefits it can give.

With divination spells being mostly invisible, I like to describe the nature of peering into the arcane to gain knowledge. Depending on the spell it could be described along the lines of seeing an eye made of arcane energy opening up on the caster’s forehead while it uses these types of magic.

So let’s say the party cleric wants to ask their God a direct question and use the spell known as Divination.

As you place the incense and silver idol to your God inside the bowl, you sit down and light the incense as you begin casting the spell. You feel the wind rush past you, and the familiar warm glow of your God fills your senses. You know they are listening. You ask “How do we stop the army of undead marching upon our city?”. A moment or two passes, you feel a moment of contemplation from your deity of choice. They reply, “My child, the undead do not band together naturally, something is forcing this union of evil. Find the source, and you’ll find your answer.” The warm glow slowly leaves your senses, as you open your eyes, and feel as if hours have passed, but you look around and realize barely even a moment has gone by.

As always I hope this gave you more understanding of this school of magic. I’m hoping that the descriptions I’ve given will assist you in coming up with your own wonderful ways of describing this really cool school of magic. So thanks for taking the time to have a read through this post and until next time, may your day be a critical success!