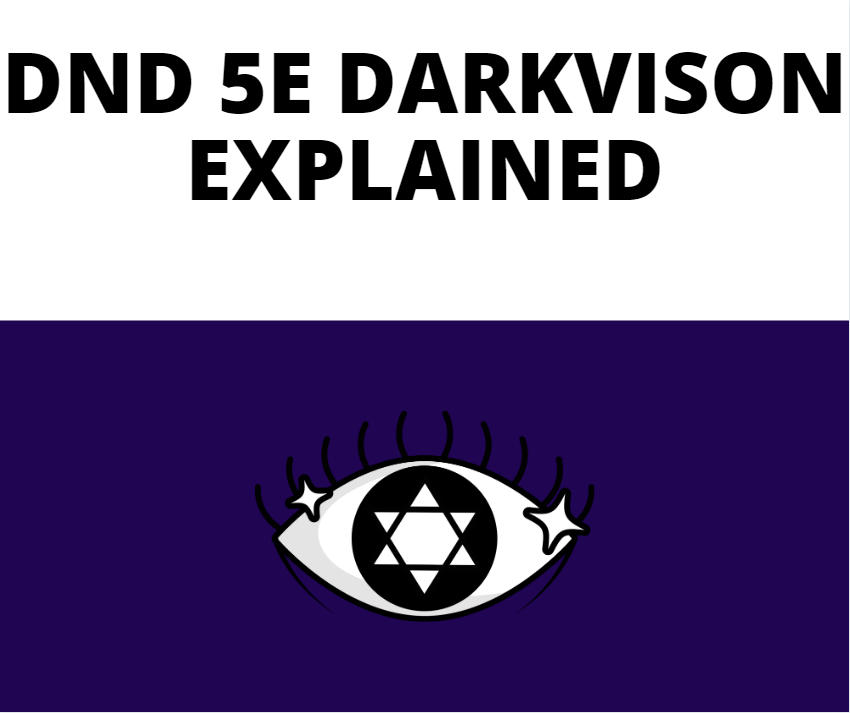 Hey all, so in today’s post, DnD 5e Darkvision Explained, we’re going to discuss the various types of vision in DnD 5e, as I feel like it’s a bit of an ambiguous part of a lot of home games. It’s definitely a topic that causes some confusion among players at times.

So without further ado, let’s dive right into the post!

In DnD 5e there are a few different terms for how bright, or dark an area is. Once you understand how the levels of light affect your creatures and players you’ll feel a lot more comfortable with changing the light levels and having the light levels be an actual obstacle in the game.

First, we have two terms that will get used a lot, lightly obscured, and heavily obscured. Both terms refer to how easily a creature can see in a specific area.

Lightly Obscured – An area that is considered lightly obscured could be something like a light fog, or a forest with a lot of foliage, and most importantly, an area that is dimly lit. Areas that are lightly obscured impose Disadvantage on Perception checks that require sight. So spotting an enemy or trap can be a little more difficult in these areas. On the flip side, these areas provide a place to hide for your players.

Heavily Obscured – An area that is considered heavily obscured might be something like a very thick fog, a dense forest or thicket, and again mostly importantly to our discussion, anywhere that is in complete darkness, caves, dungeons, crypts. Creatures in a heavily obscured area automatically fail Perception checks that require sight. So again these places can be extremely dangerous if caution is not taken, or preventative measures aren’t used to subvert whatever is causing the area to be obscured. A wind spell to blow the fog away, or a light source to brighten up the darkness.

Now that we’ve discussed these two terms, now we can discuss the actual levels of light.

As mentioned above, there are a few different terms that describe how bright or dark an area is. Depending on the term used it allows everyone to understand what that may mean for their characters (or creatures if you’re GMing). There are 3 designations, technically there are 4, but the 4th is more of a specific case.

Bright Light – Areas that are considered bright light mean that most things will be able to see normally in that area. Generally, that would be places like, outside during the day, or a well-lit room or establishment. Torches, lanterns, fires, and magical means of light all provide bright light, within their specified ranges.

Dim Light – These are areas thick with shadows, places that aren’t well lit. Twilight or even a bright full moon can shroud the land in dim light. Areas that have been hastily lit, like active dungeons or bandit hideouts would also be likely considered dim light. Think of a room at night with just a TV on, it’s still relatively dark, but there is some light Remember, anything considered dim light, means that the area is Lightly Obscured.

Darkness – Areas covered in darkness are very common in DnD. Areas such as natural caves, or long lost dungeons or crypts. However, keep in mind the most common one is during the night, the land itself is shrouded in darkness. Of course, generally, a torch, lantern, or spell will illuminate these dark areas. Remember though, that an area that is covered in darkness is considered Heavily Obscured.

Magical Darkness – This one ties into darkness, however it cannot be illuminated by any means. This type of darkness is usually cast via a spell so it can only really be gotten rid of by getting rid of the spell, dispel magic and some other spells will be able to get rid of magical darkness. Some creatures are also able to see through magical darkness, the warlock invocation, Devil’s Sight, allows the warlock to see in any kind of darkness, magical or not.

There are a number of different ways to “see” in DnD that go above normal vision. In 5e we have Darkvision, Truesight, Blindsense, and Tremorsense. Some of these apply really only to creatures as opposed to player characters.

Darkvison – Let’s kick off by going to the most common one. Darkvision can be gotten in many different ways that would take too long to explain. Generally, it’s gotten from what race you pick, but some spells and magical items might grant it for a duration. Usually, a creature with darkvsion will have a specified range in their stat block, or if it’s a player it should be on their character sheet or in a spell/potion/items description. This type of vision allows the creature to see in darkness as if it were dim light, so they would only be considered to have their vision lightly obscured. Interestingly, darkvision is greyscale, meaning the creature can only see in black and white when their darkvision is active.

Truesight – This type of vision is interesting; it allows a creature to see what is truly there. Specifically, it allows the creature to see normally in darkness and magical darkness. On top of that, however, it also allows them to see anything that is invisible, they can also see through illusions and automatically succeed on saving throws that deal with illusions. They can see a shapeshifters’ true form as well as a creature transformed by magical means. Finally, it allows them to see into the Ethereal Plane (think Doctor Strange when he astral projects, that’s sort of like the Ethereal Plane). Truesight is very powerful and generally reserved for high-level spells or powerful creatures like Ancient Dragons and Liches.

Blindsense – This one should be familiar to anyone that has read or watched anything to do with Marvel’s Daredevil series. For the uninitiated though, blindsense works like a kind of echolocation. The creatures with this type of sight generally can only perceive out to a small range around them, but it generally works better than sight within that range. They can perceive invisible creatures within that range, it is next to impossible to sneak up on them. They also obviously aren’t affected by the conditions of the light, it can be complete darkness and they can “see” just fine. Creatures that don’t have eyes typically have this in DnD, slimes and oozes being one of the more commonly seen types of creatures that have this.

Tremrsense – This one here should be familiar to anyone that’s seen Avatar The Last Airbender, Toph, the little blind earthbending girl, has this sense. It allows the creature to sense movement through vibrations in the ground. This is a bit more limited than Blindsense, as it cannot detect anything that’s not touching the ground. This type of vision is found typically on creatures that can burrow, so Ankhegs and Buletes being some of the more common ones.

Hopefully, you all found this more in-depth post helpful. I know I always found vision a bit tricky in DnD when I first started, especially when it comes to being able to describe how bright or dark it might be to your players, so they take the appropriate response. Having your own reference points for the light levels helps a lot. I really like the one I mentioned about Dim Light being akin to a dark room with a TV on, still pretty dark, but not darkness. So thanks for taking the time to have a read through this post and until next time, may your day be a critical success!