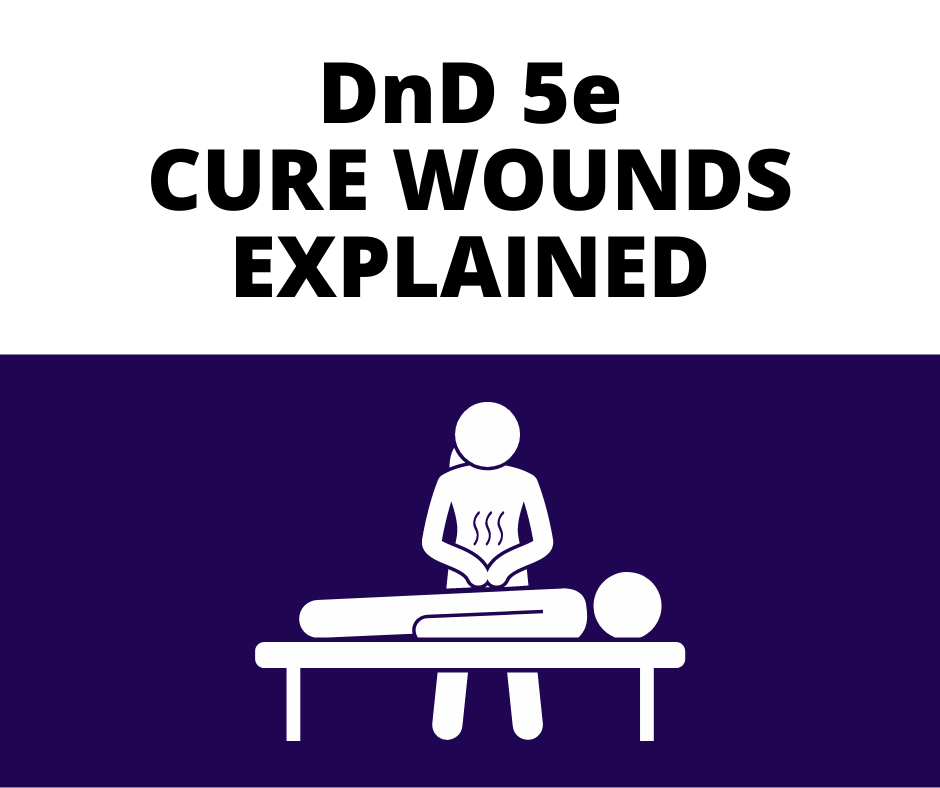 Hey folks, hope this week is treating you all well. In today’s post, DnD 5e Cure Wounds Explained, I’ll be going over this beloved spell. First I’ll cover what the spell does, then how it works, then finally go over some questions surrounding the spell.

So grab hold of your holy symbol and pray to whatever God comforts you as we dive into this post!

What is Cure Wounds?

Cure wounds is a very early healing spell, useable by Bards, Clerics, Druids, Paladins, and Rangers. Since it’s an early spell it doesn’t heal for much, but can really do the job.

It’s a 1st level evocation spell. Although, I tend to think of it as a necromancy spell since you’re channeling life/death energy to heal wounds. However, there are arguments that evocation makes sense as well.

The caster has to touch the target, and the heal is 1d8 plus the Spellcasting modifier of the caster.

How does Cure Wounds work?

It’s a fairly simple spell, touch the target, and heal them. Normally when used it’s to get someone back up from being knocked unconscious, at least in the later levels.

Although, this can lead to a situation known as death yo-yo-ing, which is where you are brought back alive from being unconscious, then since you have a small amount of HP you immediately die again. Now, this might not be an issue, but some games, mine included, have it so that if you fall unconscious, you then gain a point of exhaustion upon being resurrected.

If you yo-yo in a game with this rule, you will quickly find yourself overwhelmed with points of exhaustion.

Can you cast Cure Wounds on yourself DnD 5e?

Yep, you sure can. There is nothing stopping a caster from using it on themselves.

Does Cure Wounds do damage to Undead DnD 5e?

Not in this edition of DnD. Cure wounds has no effect on Undead or Constructs.

Short post for this simple but useful spell. If I’m playing a class that can have this, I usually prepare it, I just find that you never know and a little bit of healing is always worth having in the toolbox.

Hopefully, you learned something from the post, and until next time, I hope your day is a Critical Success.