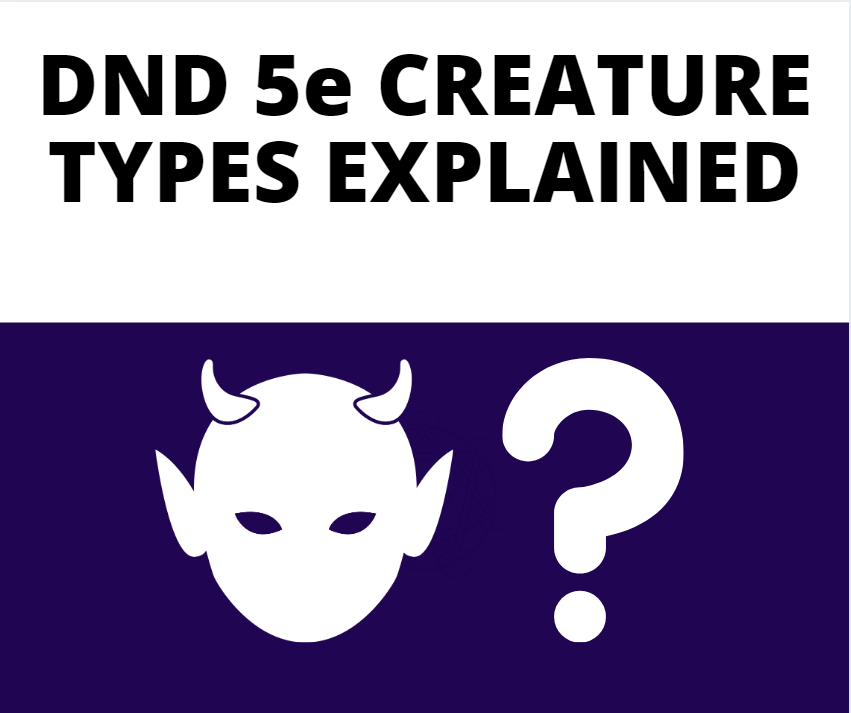 Happy Sunday everyone! Hope the New Year has been treating you well. In today’s post, DnD 5e Creature Types Explained, I thought we’d go over the basics of each of the multitude of creatures in this fantastic game!

We’ll be going over a quick description for each creature type and then giving an example of a creature from that type.

Aberration – Typically creatures that fall under this category are considered “outsiders” things not of this world. Alien beings from other dimensions or worlds. Although sometimes this designation can describe the unnatural nature of the creature, even if it is from the main local cosmology of your world or any other DnD setting.

A good example of this would be the Aboleth. These creatures are enormous eel-like creatures with telepathic and psionic abilities. Typically, they are always evil and have their own machinations going on. When an Aboleth is born, it retains all the memories of its ancestors. If you’ve ever seen the TV show Stargate, you’ll know there is a similar creature known as Goa’uld, only Aboleths are much bigger!

Beast – This is a pretty simple one, creatures that are naturally occurring in the prime material plane of your world or any DnD setting. Relatively simple creatures, horses, dogs, bears are all types of beasts. A lot of the time anything that isn’t a humanoid, and lives in a state of perpetual survival would be considered a beast. Typically, these creatures aren’t highly intelligent.

My favorite beast to add in my games to spice things up is dinosaurs. Specifically, the Tyrannosaurus Rex. I feel it adds a certain familiarity to the world that is usually coated in magic and fantasy. Plus, who doesn’t want to have a small island somewhere in their D&D world that isn’t basically Jurassic Park?

Celestial – Sometimes referred to as Angels (although this isn’t entirely accurate) these creatures typically come from the upper planes, which is home to many good-aligned creatures. Normally these creatures have characteristics of creatures from the prime material plane but have slight variations to show they have been touched by the holy realms where they reside. Think along the line of angels looking human, but having wings.

A well-known celestial I like to add to my games, especially since it’s relatively low level is the Unicorn. These creatures generally dwell within the holy realms of the upper planes, but from time to time they may get to the material plane through various means. As said above, they look like horses, but are generally a brilliant white and sport a single horn that protrudes from their forehead. They can also be sent by the good-aligned Gods to aid their followers in dire times.

Construct – This is a varied designation of creatures, some of the creatures here wouldn’t be typically seen as beings, merely tools. Constructs are beings that have been crafted in one way or another. At the bottom end of the scale of simple constructs, you have things like flying swords, or animated armor, which basically follow simple instructions and cannot communicate themselves. On the other side of that scale, you have a grouping of creatures known as Golems, which can be fairly intelligent beings in of themselves.

I really like the constructs that fall under the category of Modrons. These creatures are a race unto themselves. They are the personification of order. Made of clockwork gears and motors they come from a plane of reality known as Mechanus, which in the wheel of cosmology, represents Lawful Neutral.

Dragon – Who doesn’t know about dragons? For DnD these creatures are highly intelligent, at least for the most part. If a dragon manages to reach its final stage of life as an ancient dragon, they can be one of the most powerful beings on the prime material plane. If you want to look to media for a good representation of what evil ancient dragons can be like, The Hobbit’s Smaug is a dragon that really captures that feeling of a massively powerful being.

I really like the good-aligned dragons, and I don’t think they get enough showing. Gold Dragons are the ones that are the antithesis of the evillest dragons. They represent the true lawful good nature of what creatures can be. Although they are still dragons, and all dragons love treasure. However, treasure can mean many things, a pile of gold is definitely considered treasure, but a Gold dragon may prefer to be the ruler of many kingdoms, that would be its treasure.

Elemental – These creatures dwell in the elemental planes of existence, so the planes of, fire, water, air, and earth. These creatures typically wear their origins on their sleeves, so to speak. Their appearance or their abilities usually give away what plane they originated from.

Ever since I saw Flail Snails in Volo’s Guide to Monsters, I fell in love with their goofy look. They are literally massive snails with naturally occurring flails attached to their head. They would typically come from the plane of earth, but many have found their way to places on the material plane such as the Underdark.

Fey – The Feywilds is the original plane of existence for these creatures. The feywilds itself is teeming with life, and as such the category of creatures known as Fey is very varied. Typically, they are aligned with nature in some way, but this isn’t always the case. The feywilds are the original birthplace of the elves we know today, of course, this is millennia-old history for the elves.

I always liked Hags as antagonists. If you look at their abilities, they aren’t your typical bad guy. They are sneaky and cunning. They play a lot of mental warfare on their victims, but also have this feeling of deep dark magic. You may make a deal with a hag and their price may be a treasured memory or very cliché, but the firstborn of that creature.

Fiend – This designation is another that is extremely varied. It actually covers quite a lot of creatures. The main thread tying them together is that Fiends come from the lower planes of existence. Meaning they are typically evil creatures of some kind, ranging from Lawful Evil to Neutral Evil, to Chaotic Evil. They can come from all sorts of planes of existence, though the two I typically see are The Nine Hells, and The Abyss. Both places of great evil.

This might be cheating but my favorite fiend creature has to be Orcus. While he himself is a unique creature of immense power and not so much a category, his lore is sprinkled all throughout DnD. He is a demon lord in the Abyss. One of the most powerful. One particularly awesome thing about him is that he has a magical item that is his but has fallen into mortal hands, The Wand of Orcus which you should definitely read up on!

Giant – Fairly simple one. These creatures look very much like extremely large humanoids. They’re bipedal, and use similar weapons and armor as smaller humanoids. There are Cloud giants, Fire Giants, Frost Giants, Hill Giants, Stone Giants and lastly the Storm Giants. They have a loose hierarchy. Storm Giants being at the top of that hierarchy. Although those are considered to be “true giants” there are creatures that are offshoots of giants such as the Ogre, Troll and Cyclops.

I’d say my favorite is the Storm Giants however. This is because they have a very Norse feeling about them. At least that’s the vibe I always got from them.

Humanoid – This one is simple but also a little more complex than one might think. It covers a huge range of creatures. Typically, anything bipedal, semi-intelligent and native to the prime material plane would be considered humanoid.

I always liked the Lizardfolk, mainly because when I first started my own universe for my campaigns one of my players was a Lizardfolk, and we built them to be these nomadic creatures. Similar to the Mongols of our own history. Although typically they are swamp-dwelling evil creatures who worship long-forgotten deities.

Monstrosity – This designation is a strange one, it’s almost like a catch-all designation. If a creature doesn’t fit the other categories, then it might end up designated as a monstrosity. One similar thread, however, is that monstrosities can be created from experimentation, or via magical curses or rituals that have gone wrong. A lot of “mythical” creatures that we would know from our world are considered monstrosities. Basilisks, Minotaur, and Gorgons just to name a few.

How could I write anything on monstrosities and not mention Mimics though? Mimics are creatures that can change their form into that of inanimate objects. Typically depicted as treasure chests, these creatures lure greedy and unsuspecting victims by mimicking these objects. When a creature tries to interact with the object, they get stuck to the mimic due to a glue-like substance they coat themselves in, and the mimic then will attempt to consume their prey.

Ooze – One of my favorite types of creatures in all of DnD. They are so uniquely DnD. These are creatures made of sentient slime. They are typically made up of a jelly like substance, and usually highly corrosive. Meaning their main form of attack as well as how they eat is to engulf their prey and melt it while it’s stuck inside them.

The Gelatinous Cube is the bane of many a party. I’ve seen countless adventurers perish to these awful (but hilarious) creatures. They typically would reside in dangerous places that get a lot of foot traffic. Dungeons and sections of the Underdark would be a great place for these creatures to sustain themselves. Due to their nature, they don’t really have any natural predators, so once they find an area that suits them, they could exist there for quite some time.

Plant – These creatures have usually been brought to life from nature magic. Think of the Ents from Lord of the Rings. Creatures who are made up of vegetation, but are alive and sentient. There aren’t too many in DnD.

It’s actually hard to pick a creature to choose from. I’d probably pick the Myconid’s however. They are a race of mushroom creatures that have their own society in the Underdark. They are always a great little addition to any campaign that takes the party to the Underdark, as they likely aren’t expecting a society of mushroom people.

Undead – This is an easy one, but also quite far-reaching. There is a whole load of undead creatures in this game. It’s basically any creature that has been given life through unholy means. Sometimes this can be someone else raising the dead, or it can be done via nefarious pacts with unsavory creatures.

My favorite has to be, and it’s very cliché, but it’s definitely vampires. An especially powerful one. Take a look at ones such as Strahd Von Zarovich from the DnD adventure “Curse of Strahd”. It is a masterclass on how to run a powerful evil vampire.

So that was a pretty exhaustive list of the different creature types in DnD 5e. Hopefully, I’ve given you some extra information you might not have known. There was a fair amount of talk about the different planes of existence and we will be going over that soon in a future post. As always, I hope you enjoyed the post. As always thanks for taking the time to have a read through this post and until next time, may your day be a critical success!