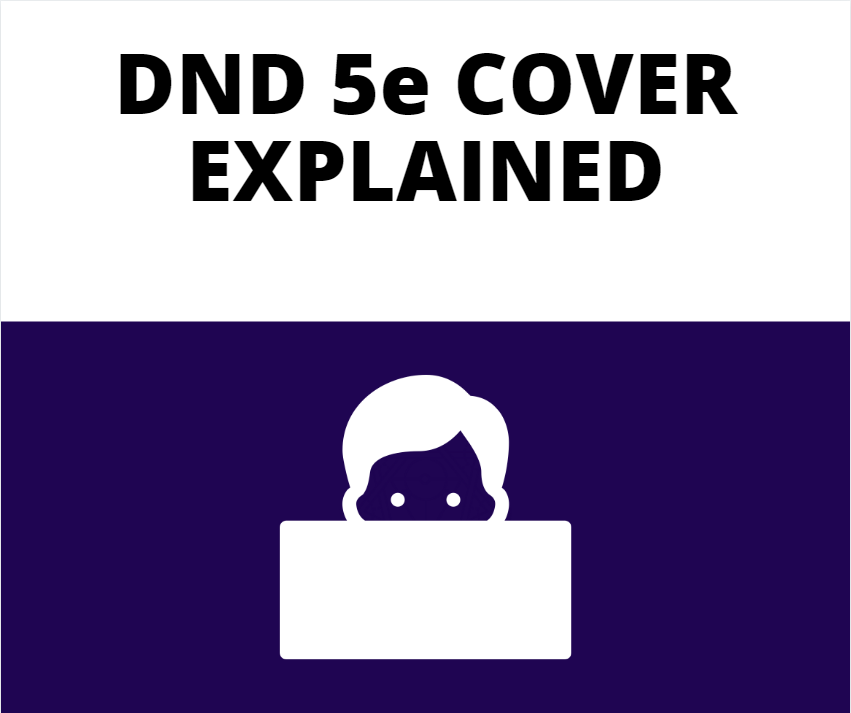 Hey all, happy Sunday! Hope this week has been good to you all. I’m getting closer to being able to announce a project that the team and I have been working on, so that should be exciting! However, to tide you over till then, I figured another post was on the docket.

So in today’s post, DnD 5e Cover Explained, we’re going to be talking about how cover works in the game. The system can be easy to miss for new DMs and players alike, but it adds a layer of strategic combat that can really help out when the odds are stacked against you.

So let’s shine a light on this system and crack right into the post!

Okay, so, the basic idea of the cover system, is that if you hide behind objects or walls that would either slightly or completely obscure you from your enemy, then the character who is obscured gains a bonus to their armor. This makes them harder to hit. So hiding behind things can really help you against attacks from ranged weapons, and certain spells.

Specifically, the cover system is broken down into three main categories, each one giving a specific bonus to a character’s armor class. Those are Half Cover, Three-Quarters Cover, and Total Cover. The names themselves give an indication of how much of the body has to be covered by the object, creature, or wall to give its respective bonus. Let’s take a look at each

Half Cover – This type of cover is when some kind of object or creature that a character is hiding behind covers at least half its body. This could mean a broken-down wall, or a half fence, thick shrubbery, a thin tree. Obviously, it’s up to the GM to describe these kinds of things so the players know ahead of time what could potentially be used as a defensive spot. This type of cover gives the hiding creature a +2 bonus to their AC (armor class).

Three-Quarters Cover – This type, as the name suggests, gives its bonus if ¾ of the creature’s body is covered. So this is things like larger walls, and objects that cover almost all of the creature’s body. Again, the GM should be trying to keep these things in mind so the players are aware of their options. This type of cover gives a +5 bonus to the hiding creature.

Total Cover – As the name suggests, this type of cover is when the creature hiding is completely covered by the object or creature they are hiding behind. This would be like a full solid wall, or a massive tree, maybe the corpse of a giant, or dragon. Creatures with this type of cover don’t actually get a bonus to their AC, what it means is that they cannot be targeted by direct attacks or spells. They can however be hit by attacks or spells that have an area of effect, as long as the attack or spell can be used in a way that would allow them to be hit by the affected squares of that attack or spell. The easiest way to think about it is if a creature hides around a corner, another creature could cast a fireball centered next to the corner (the area the casting creature can see), and because of the size of the fireball spell, it would still hit the creature around the corner.

I hoped this post helped, I know it’s a rule that I always forgot about as a GM myself, and still do at times. So just try to keep it in mind, and try to encourage your players to take advantage of it, as well as making your own creatures take advantage of it, you’ll get a lot more used to using it and be able to use it a lot easier in situations. As always, thanks for taking the time to have a read through this post, and until next time, may your day be a critical success!