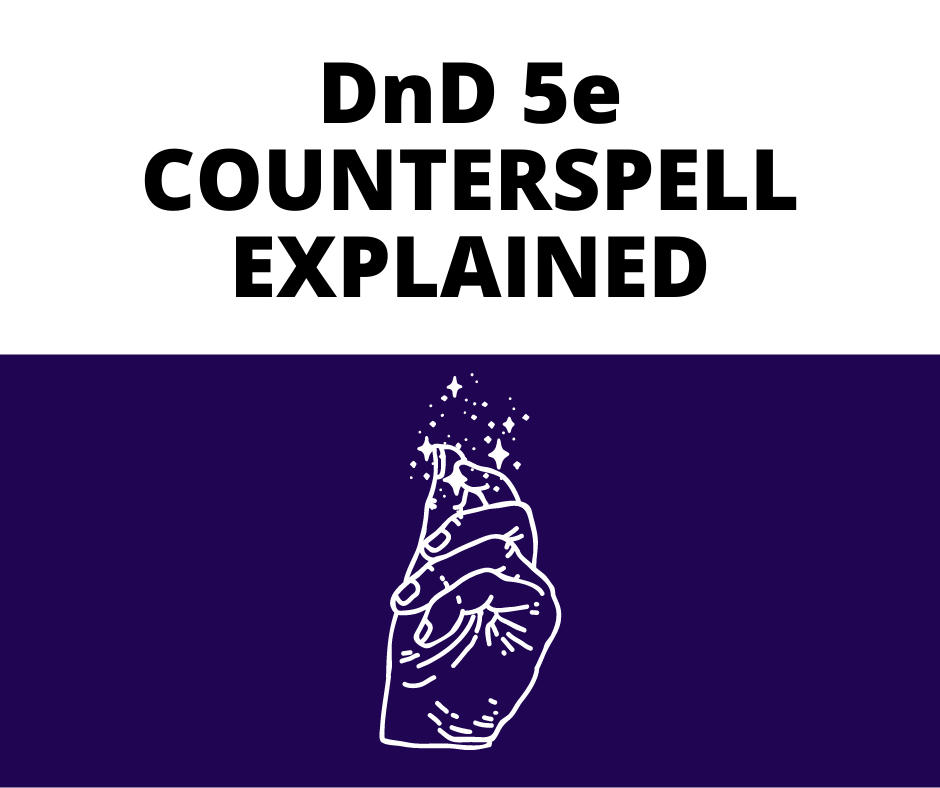 Hey folks, hope you had a good weekend! In today’s post, DnD 5e Counterspell Explained, I’ll be going over this near mandatory spell. First I’ll go over what it does, then how to use it, and finally, I’ll finish off with some of your questions surrounding the spell.

So keep that reaction ready, and prepare yourself as we dive right into the post!

In DnD 5e Counterspell is a 3rd level Abjuration spell. It takes 1 reaction to cast it and can be cast up to 60ft away from the target. Typically, it can only be used by Sorcerers, Warlocks, and Wizards.

It’s actually a fairly simple spell which when it works, will prevent another magic-user from casting a spell. Since it only requires a reaction to use, it can actually be cast outside of your turn. So if an enemy magic-user tries to destroy your party with a well-placed Fireball, a Counterspell can ruin those plans.

So what that means is if Counterspell is cast normally at 3rd level, against an enemy casting a 4th level Fireball, then the caster of the Counterspell would make the above roll, and hope that they get 14 or higher on their check. If they do beat the check, then the target spell is rendered inert and does not cast. Even though the spell isn’t cast, it will also eat up a spell slot from the target.

How to use Counterspell

It’s really a simple spell, one that can really change the tide of a battle when used properly. First, the caster must recognize who the enemy spellcaster is, then they need to stay within 60ft of the enemy caster. Doing so means they are always within range to use Counterspell.

Once the potential targets of the spell have been identified, then it comes down to a waiting game. The user of the Counterspell must keep their reaction ready to use, that means trying not to use it on other spells like Shield, or using it in an attack of opportunity.

That’s more or less all that’s needed tactically to use this spell. The only other thing is trying to judge what level of Counterspell you wish to use on the target. If it’s a dangerous enough spell then casting Counterspell at a level equal to or higher than the spell being cast would be recommended as that doesn’t leave anything up to a dice roll.

Yeah, it can, which can make for some interesting and tense moments. Keep in mind most creatures only have 1 reaction, so you can’t end up in a continuous loop of Counterspell.

Can Legendary Actions be Counterspelled in DnD 5e?

If the Legendary Action states that it allows the creature to cast a spell, then yes, it can be Counterspelled.

Can a Spell Scroll be Counterspelled?

Yep! If a creature attempts to use a Spell Scroll and has Counterspell cast on them, then the Spell Scroll fails and is consumed.

As always I hope you enjoyed the post a learned a little about this wildly useful spell. I think Counterspell can be a little too mandatory for spellcasters as it’s just so powerful. Even if you can’t get rid of a spell without a dice roll, the mere chance a 3rd level Counterspell could prevent a 9th level Spell is pretty crazy. Alas, I’m not sure there’s much that could be done to the spell, I think it’s required, but it would need a big rework to not feel as mandatory.