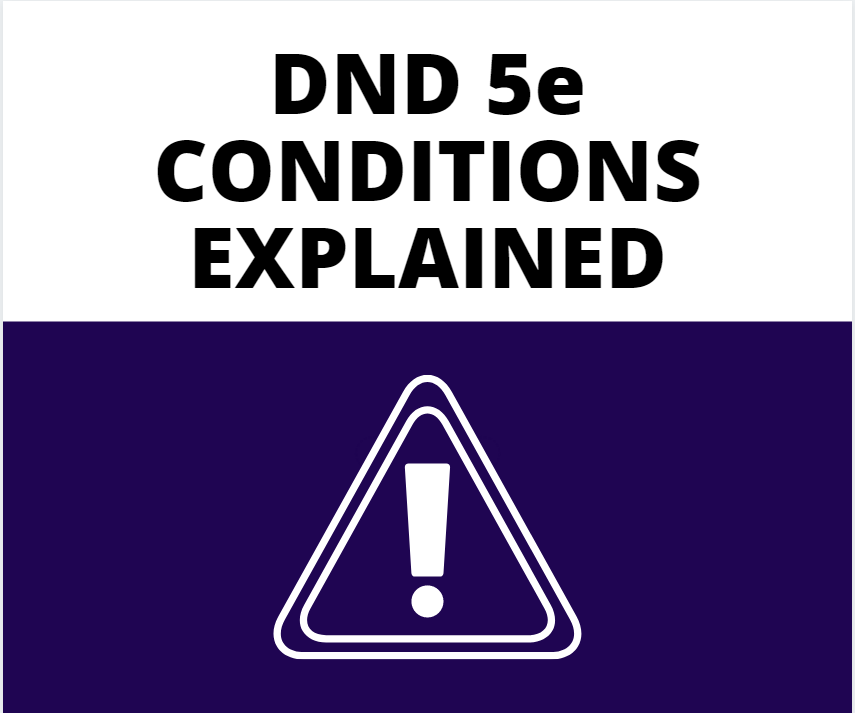 Well, happy holidays and happy new year to everyone. In this week’s post, DnD 5e Conditions Explained, we’ll be looking at all 15 conditions and give a little example of when they might crop up.

Conditions in DnD 5e refer to the status conditions, which basically means something that affects your character. Typically, they are applied via spells, class features, and monster attacks, but can also come up in general play depending on what the going on in the game.

So let’s go over all of these conditions!

Blinded – So this one does what it says on the tin. Creatures affected by this condition cannot see, because of this, they fail any sight-based ability checks automatically. They also have disadvantage to attacking other creatures, and attacks on the blinded creature have advantage.

Example – There is a 2nd level necromancy spell that can be cast called “Blindness Deafness” if this spell takes hold the spell caster can choose to make a creature either blind or deaf. Of course, any situation where a creature might lose the use of its sight is also applicable, maybe they are blindfolded and cannot take it off.

Example – The creature known as the Succubus is also known to charm their victims. They are able to use this innate ability to charm someone for up to 24 hours, the target must obey all verbal and telepathic commands given by the succubus. Charm can come from many sources, typically spells, but also magical potions can be used to charm.

Deafened – This one is more of a less harsh blind. A creature that has this condition automatically fails any checks that require them to hear.

Example – The lair of a bronze dragon is a dangerous place to be. Their lair action can be quite nasty. One of their lair abilities can inflict the deafened condition on creatures. They are able to conjure a thunderclap within 120ft of themselves and any creature that fails the Con saving throw is deafened until the next turn. So think of anything significantly loud, maybe someone fires a cannon indoors, that could cause everyone to have to make a saving throw to avoid being deafened for some time.

Exhaustion – We’ve actually covered exhaustion separately out DnD 5e Exhaustion Explained post. However really briefly, it is a stacking condition, as a creature accumulates more points of exhaustion (basically gained from overexerting ones-self) the condition worsens and can lead to immediate death.

Example – A barbarian who has chosen the path of the berserker primal path can go into a frenzied rage, when this ends they gain 1 point of exhaustion. A creature who chooses to not sleep will also gain points of exhaustion the longer they stay awake.

Frightened – Creatures who have this condition are unable to move closer to whatever caused the condition. They also have disadvantage to ability checks and attack rolls while the source is in their line of sight.

Example – There is a creature known as a Revenant, which has an ability called Vengeful Glare. This ability causes the target to become paralyzed when they fail the Wis saving throw. When the paralysis ends, which is on the revenant’s next turn, the target of the ability becomes frightened. To me, this is a cool condition to add for custom creatures that you may want to be imposing, having the members of the party be scared to the bone of a creature can make for a memorable fight.

Grappled – When a creature is grappled their speed becomes 0. Meaning they effectively cannot move unless they are able to teleport or use a spell to force the target away from them. Such as an eldritch blast with repelling blast from a warlock.

Example – The creature known as an Ankheg can grapple a creature of Large size or smaller when it uses its bite attack. When it successfully grapples another creature the ankheg has advantage on attack rolls against the grappled creature. Grapple can come up in many places, bar fights and bare-knuckle brawls plus creatures with tentacles typically can do it as well.

Incapacitated – Creatures under this condition are unable to act. They cannot take actions or reactions, certain abilities that cause incapacitation might have stipulations on how the target can move as well. With this condition it can be something that would cause the creature to not be able to do anything, they could be under the effects of a potent hallucinogenic causing them to be unable to take actions or reactions.

Example – The 3rd level illusion spell, Hypnotic Pattern, causes creatures who fail the Wis saving throw to be incapacitated for the duration and their speed is also set to 0 for the duration.

Invisible – Another that is quite simple, when a creature has this condition, they are unable to be seen by typical sight. However, they can still be heard, smelled, and sensed via other means such as tremorsense.

Example – A potion of invisibility grants this condition for the duration of the potion. Many spells also grant this condition as well as magical items.

Paralyzed – Quite another common condition. A creature with this condition is considered to be incapacitated, they will automatically fail any saving throws that require strength or dexterity, attack rolls against them have advantage, and last but certainly not least, any attacks within 5ft of the paralyzed creature is considered a critical hit.

Example – A creature known as a Chuul can cause this condition when it uses it tentacle attack on a grappled creature. If the creature being attacked fails the Con saving throw, they are poisoned for 1 min and that poison also causes the paralyzed condition.

Petrified – This condition causes the afflicted creature to turn into stone (or another solid substance). The affected creature is considered to be incapacitated, it cannot move or speak and is completely unaware of anything going on around it. Attacks against a petrified creature have advantage. The creature will auto fail any strength or dexterity saving throws. The afflicted also have resistance to all damage, and they are immune to poison and disease while petrified (although, any diseases or poisons present before petrification and temporarily gone, until the creature is no longer petrified.

Example – Lots of typical fantasy creatures can inflict this condition. The medusa, the basilisk, the cockatrice. Usually, it takes at least a turn for the petrification to take hold, giving the target at least two attempts to avoid this condition.

Poisoned – Pretty simple one, when poisoned the creature has disadvantage on all attack rolls and ability checks. There are so many ways to become poisoned that it’d be crazy to start listing them, many monsters can inflict it, but also consider more mundane sources, like poisonous plants or poisoned food.

Example – One I always used to forget was that a creature who is drunk is considered to have the poisoned condition, and let’s be honest when a party isn’t trying to murder the next important NPC, they are getting drunk in a tavern somewhere.

Example – Say there is a squad of orc firing arrows. A creature could go prone to make themselves harder to hit.

Restrained – A creature who is restrained has its speed reduced to 0. Attack rolls have advantage against the restrained creature, they also have disadvantage on Dex saving throws.

Example – A creature who is tied up with rope would be considered restrained. Maybe they are bound in shackles while being held captive.

Stunned – Creatures who are stunned are considered Incapacitated, they auto fail strength and dexterity saving throws and attack rolls against them have advantage.

Example – There is a large creature known as an Otyugh, using their tentacle slam ability can slam a creature it has grappled. Creatures that fail the Con saving throw are stunned until the end of the Otyughs next turn.

Unconscious – This one is quite common as it’s tied heavily to combat. Creatures who are unconscious are considered incapacitated, they cannon move or speak and they are unaware of their surroundings. They drop whatever they may be holding and they also automatically have the prone condition applied to them. The unconscious creature auto fails strength and dexterity saving throws, attack rolls against the creature have advantage, and any attacks within 5ft of the creature are automatic critical hits against the target.

As mentioned at the beginning, I hope you all have a great holiday period, and I hope 2021 is a better year for everyone. I also hope that you found this post helpful in explaining and giving some examples on the different conditions in DnD 5e. As always thanks for taking the time to have a read through this post and until next time, may your day be a critical success!