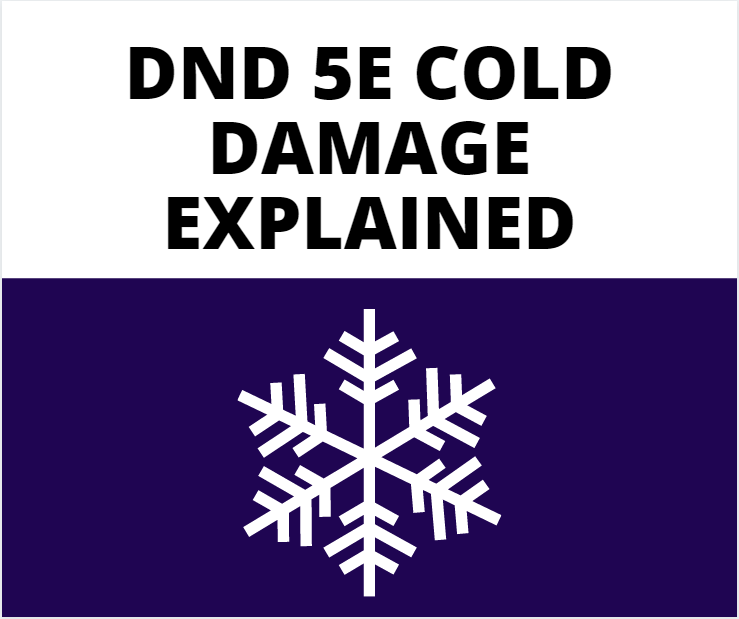 What’s up folks! In today’s post, DnD 5e Cold Damage Explained, we’re going to go over how Cold damage can show up in your games. First, we’ll look at some examples of creatures and spells that can inflict cold damage, then we’ll go over ways to describe it.

Let’s dive right into what cold damage is.

There is a fair amount of cold damage in 5e, from my own games, and having looked through the books it seems like it’s probably up there with Fire Damage in terms of how often it can show up.

In simple terms, cold damage comes from sources of extremely low temperatures. Although it tends to be when something causes a sudden drop, more like being flash-frozen as opposed to it just being extremely cold. Although I would also make a case for cold damage to be inflicted if, say for instance a creature suddenly fell into a frozen lake.

Due to how often it shows up there are a bunch of ways to inflict it, there are direct damage methods, AoE (Area of Effect) and then there are indirect methods of causing it. So let’s have a look at the specifics.

In 5e there are a bunch of creatures that can inflict cold damage, again like always, I’ve tried to pick examples that show off the different ways it can be inflicted.

The Ice Devil is a denizen of the nine hells in DnD. It is a large humanoid bug creature that is infused with the element of cold. Everything it can do will also inflict cold damage. Be it biting, clawing, or using its tail to smash into creatures, it adds 3d6 cold damage to all those attacks.

Of course, we have direct damage area of effect cold damage in the form of a dragon’s breath attack.

White Dragon’s like every other dragon has the ability to breathe out their associated damage. White dragons are associated with cold damage. Their bite can inflict up to 2d8 cold damage.

However, their main source of cold damage comes from their cold breath attack. In a 90-foot-cone in front of the dragon they breathe out freezing air, targets caught in the attack must make a Con save. On a failed Con save, the target can take 16d8 cold damage. Assuming the dragon is an Ancient White Dragon.

The Yeti is one such creature. Found in snowy mountain terrain, these creatures can inflict 1d6 cold damage via its claw attacks. Although, that’s not the main reason I decided to use them as an example.

These creatures have an ability called Chilling Gaze. This ability allows the Yeti to look at another creature and cause them to make a Con save. If the creature fails, they take 3d6 cold damage and are paralyzed for 1 min. Think of this creature being able to literally chill someone to the bone.

As mentioned before, there are a bunch of spells in 5e that can inflict cold damage. Again I’ve tried to pick spells that show off different ways to inflict this damage type. Here are some specifics.

Of course, there are direct AoE spells tat cause cold damage.

Cone of Cold creates a 60-foot-cone of cold damage in front of the caster. Any creature caught in the damage must make a Con saving throw. If the creature fails the saving throw, they take 8d8 cold damage. This spell also has the added flavor when it kills a creature the creature becomes a frozen statue until it thaws.

We then have spells that while they cause cold damage, they also lean heavily into the freezing aspect of the spell as well as having interesting benefits.

Otiluke’s Freezing Sphere, this spell is really interesting, it causes a 60-foot-radius spherical explosion within 300ft of the caster, which causes 10d6 cold damage if the targets fail their Con saving throw. So while that’s a good amount of AoE damage and has a pretty good range on it, this spell has some added benefits.

If the spell hits a body of water, like a lake, or a river, it can freeze up to 6 inches in depth and a 30 foot squared area for up to 1 min. This can also trap creatures that are in the water, trapped creatures must make a Str saving throw to escape the frozen water.

Have you ever seen those videos where people use liquid nitrogen to instantly freeze things? It’s basically like that. So it’s almost akin to throwing liquid nitrogen at people. I always flavor cold damage to either looks white or blue, depending on the source. I like to mention the air around the source of the damage condensing, and causing that fog you see when you breathe out on a cold day.

So let’s say a caster has cast Armor of Agathys on themselves and a player hits them, this is how I’d describe it.

“As your sword cuts through the visibly cold air around the wizard, and make contact with them, you feel the handle of your blade grow cold as faint blue energy climbs the sword. You feel your fingers start to burn ice cold as you take 5 points of cold damage.”

So that was our look at cold damage in DnD 5e. A pretty common damage type when dealing with magic in the game. It’s easy to conceptualize where this damage can come from, be it natural sources or magical sources.

As always I hope the post has been useful so that you can increase your knowledge of this damage type and how it can show up in your games. I hope it gives you an idea as to how to describe it so you can inject a little more flavor into your descriptions, be you a DM or a player.