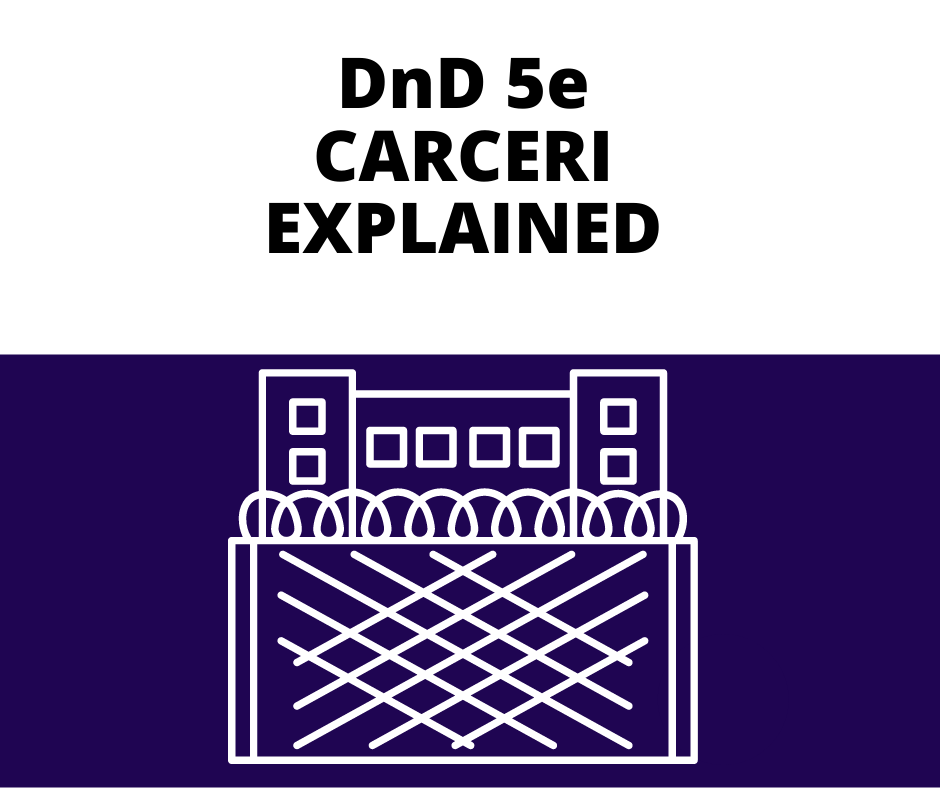 Hey folks! As promised this week’s post is, DnD 5e Carceri Explained, this plane of punishment and imprisonment is fairly large and contains many nooks and crannies. I’ll try to cover what I think is interesting to warrant inclusion to keep the post to a reasonable length.

So make sure you have your escape route planned and tattooed on your body, as we dive into this week’s post!

This plane should be considered a prison plane. Most of the inhabitants are those who have been unwillingly placed there. It should be fairly obvious from the name Carceri which one would assume comes from the term incarceration.

It’s not a nice plane by any means but is considered one of the safest of the lower planes. Still not somewhere that should be high up on your list of places to go on holiday. However, there are reasons to go here, there are beings here who can offer wisdom and knowledge lost to the ages. There are also traders and world-renowned assassins that call this plane home.

As with a lot of the lower planes, many of the sections of Carceri are battlefields for The Blood War. The endless war between Demons and Devils. So one should be careful here when traversing the different layers and locations here.

One interesting thing about this plane is that each layer is nested inside the previous. Each layer also has a seemingly endless number of planet-sized spheres that stream out from two directions from the layer. These planets are typically known as “Spheres” or “Orbs”. They can contain unique locations, but according to sources, most are uninhabited or have been desolated in the Blood War.

The first layer of Carceri is filled with the souls of political and national traitors. This land is a swampy mess. The swamps are formed from the overflow of the river Styx which flows through this layer on its way to Hades.

One notable location is the Bastion of Last Hope, a fortress said to be filled with spies, assassins, and those that can help with those jobs, such as beings that have the ability to permanently alter the looks of others, for a price. The fortress entrance is said to be that of a giant toad’s head.

Another is that of Mount Orthrys, the location of the Titans, beings that were banished from the Material Plane long ago. Their palace resides on a land bridge that connects two of the spheres that reside within this layer. Inside the palace lives the Titan Lord Cronus, who is said to be extremely wise, but prone to lashing out at visitors from the Material Plane due to his unwilling permanent residence here in Carceri.

Known as the layer of those who gave in to their animalistic nature this layer contains vast jungles and grasslands. However, both are fairly dangerous, the fields within the grasslands contain many blades of grass that can actually cut, and caution must be taken when traversing them, lest you wish to truly wish to experience death by a thousand cuts.

The jungles are no safer. The air itself is caustic, reducing those who walk the jungle floor to nothing but dust after a few short hours. Not only that but there are plants and trees here that give off even stronger toxins if approached, making this a very dangerous place if you don’t know what to look for.

The most notable place here is known as The Apothecary of Sin. Run by a Glabrezu known as Sinmaker. Super original name for an evil-aligned being, but hey, maybe that’s why he’s in the prison plane. Anyway, he makes and sells, toxins, poisons, and acids here from the plants of the jungles of Cathrys. The building is suspended high above the trees to avoid the caustic nature of the jungle below. Rope catwalks allow access to other parts of the building, although aspects of the building are susceptible to the caustic storms that can sweep this sphere.

This layer is where the souls of those who hoarded in life and chose not to help others with what they had. They are forced to live out their existence in this desert layer of stinging sand. Which constantly shifts and is barraged by Sandstorms that force them to dig out small burrows almost every day by hand causing immense pain.

These sandstorms are like no other, the speed at which the sharp sands are whipped around is enough to reduce a creature to bones who does not wear some kind of protection covering every section of exposed skin, hide, or carapace.

The most notable location here is that of The Sand Tombs of Payratheon. On one of the spheres in this layer existed a city that was swallowed by the shifting sands. Legend says that every so often the sands shift just enough to reveal the city once more, but for how long is anyone’s guess. Many of those consumed by greed have found themselves swallowed by the sands when they retake the city. The sands contain many hidden horrors, such as sand gorgons that can swim through the sand as if it were water, these beings seem to be attracted to the city, so burrowing through the sand presents a unique challenge.

The land of those who misguided others with their lies. This is a layer of Badlands, filled with cliffs and valleys that are said to dwarf anything on the material plane by many orders of magnitude. It is said that it’s impossible to traverse this layer due to the sheer size of the mountains and canyons. However small trade routes do exist, basically, they are the only routes that will allow for the traversal of this plane. This leaves travelers open to attack since there is only one true path to follow if one is on foot.

The only real place of note here outside of small settlements is that of The Garden of Malice. These gardens are found on one of the spheres of Colothys, where out of the cliffs and in the valleys great vines can be seen as well as flowers that sprout from the cliff faces as well as the vines. However, the vines themselves seem to be alive. They will attack and attempt to kill anything that approaches them or attempts to take the flowers. It is theorised that the vines are actually all part of one enormous sized creature that has been growing here for eons, engulfing the entire sphere.

The layers of those who were too prideful, self-absorbed beings who chose not to help others when the opportunity arose. This layer and its spheres are filled with freezing oceans, and a constant black snowfall, both of which are acidic (of course!). Due to that, there are no real buildings here that last long, always falling into the acidic oceans after being pummelled by the acid snow. It is said that somewhere in one of the spheres here lives another exiled Titan, similar to the ones on Orthrys, but not much is known about them.

The most notable location here is actually almost always in constant motion. A ghost ship known as The Ship of One Hundred. This ship is able to freely travel the spheres following some kind of course that has lasted for eons. The ship is unmanned, but below the deck exists one hundred stone sarcophagi, no markings or features are present on them. It is said that when they are opened, whatever exists inside kills everything aboard the ship. Those that make the ship their temporary home to allow travel across the many spheres of Porphatys do not take kindly to people who attempt to open them, and will often kill anyone who tries before they are successful.

The final and lowest layer of Carceri, and the home of the deity Nerull. This is the only layer on Carceri that doesn’t have any adjacent spheres, just one single sphere made of pitch-black ice with various streaks of crimson. The air itself here is so frigid that souls can be seen frozen in the ice with their lips frozen shut.

The most notable location here is The Necromanteion. The realm of Nerull. A Greater Deity of Death, also known as The Reaper. Similar to the lands outside, the walls, floors, and ceilings contain the trapped souls of those from Carceri. The hall, known as The Hidden Temple is flooded with every kind of undead imaginable, and probably some that are unimaginable. Demonic clerics also surround the various black alters piled high with necrotic flesh as they chant necromantic verses from their various religions.

In the center of the hall resides Nerull’s throne, where the rust-red grim reaper himself sits, clutching his staff known as Lifecutter, from which a scythe blade of red force energy protrudes from the tip. It is said to have the ability to take the life of any being.

Beneath the Hidden Temple resides passageways to horrors that even the demonic priests stray away from. On occasion echoes of whispers, screams, and agonized moaning come from these passageways. Often described as ancient and otherworldly.

There aren’t that many notable beings on Carceri. At least according to lore, your world’s Carceri may be different. However, these are the beings that are most notable or found in abundance.

The God of Death. This deity is effectively The Grim Reaper. Even down to the scythe that they wield in their hands, although the blade of this one is said to be made of some kind of crimson energy, and is said to be able to kill any being.

He sits on his throne within the lowest layer of Carceri, Agathys, within the Necromanteion. Here all sorts of undead roam, as well as necromantic priests and clerics who strive to expand their work in creating more undead.

What is Carceri in DnD 5e?

In summary of the post, it’s a 6 layered plane of existence that is used almost as a prison for beings that have been banished to it. It is home to the God of Death Nerull, and a few other figures such as the Titans.

How to Get out of Carceri in DnD 5e?

As is usual with most prisons, getting in is easier than getting out. Portals often are one way when they lead to here, allowing beings to be placed in, but now allowing their return.

If you are powerful enough, Plane Shift will allow you to leave as well as other such powerful spells that allow for planar travel. Otherwise, bargains must be struck with the beings there. Likely one with the Demons and Devils that war there. They might have portals that can get beings out.

As always I hope you learned a bit about this plane of existence. It’s not one I’ve really used in the past; it is an interesting one, however. My own personal feeling is that it doesn’t really contain all that much that can be used other than Nerull and possibly the Titans. So it’s mostly up to you to add more details, such as powerful beings from your worlds that have been trapped here for their transgressions in the Material Plane.

So until next time, I hope your week is a Critical Success!