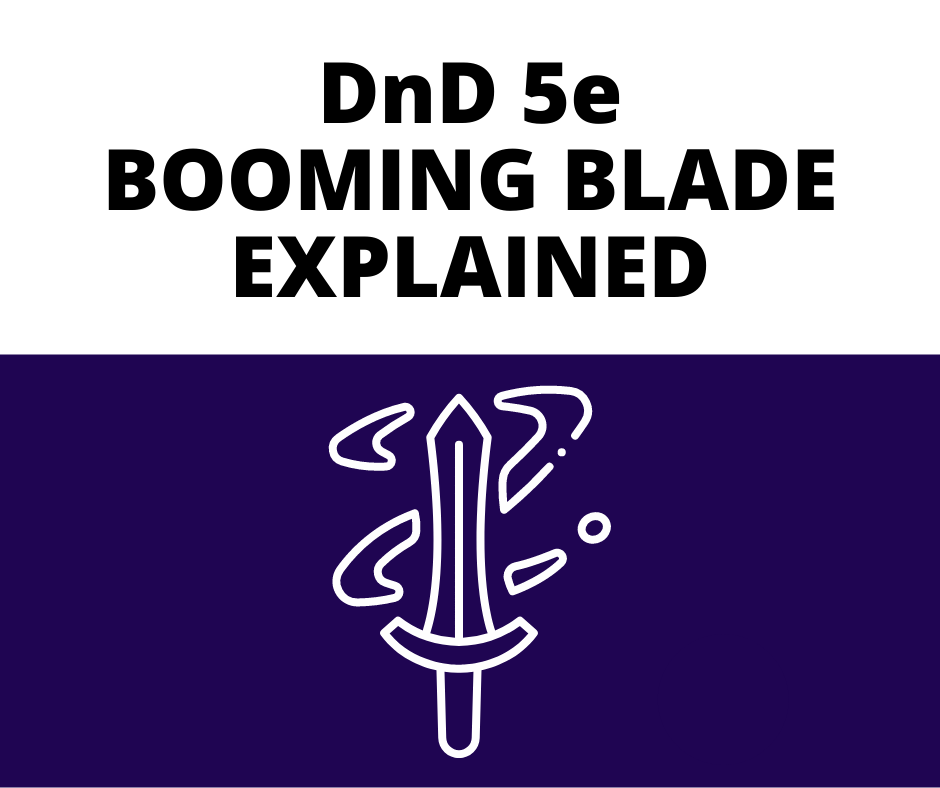 Hey folks! In today’s post, DnD 5e Booming Blade Explained, I’ll be going over this thunderous spell. First off I’ll cover what the spell is, then how to use it, and finally, I’ll answer some questions that surround the spell itself.

So don’t move an inch as we dive right into today’s post!

What is Booming Blade?

Booming Blade is an Evocation Cantrip. It actually comes from the book Tasha’s Cauldron of Everything, which I fully recommend getting as it adds a whole host of new things to the game. The spell can be cast using 1 action, and you cast it upon your weapon and make a melee attack against a target.

If the attack is successful normal rules apply, so the attacked can roll standard damage. However, the target is also surrounded by thunderous spell energy. If the target willingly moves before the start of the caster’s next turn, they take 1d8 Thunder Damage and the spell fades.

A big thing to note is that cantrips tend to grow in power as you get deeper into the levels in DnD. This cantrip is no exception. At 5th level, the initial hit that shrouds the target in the thunder energy also deals 1d8 Thunder Damage and the movement damage is increased to 2d8 Thunder Damage.

How to use Booming Blade

Booming Blade is a pretty good spell to dissuade someone moving normally around the battlefield. If a melee character sticks to a target, this spell can be an added annoyance for the targets to deal with.

The way I’d use it is on targets that keep trying to attack the backline of the party. Now don’t get me wrong, it’s not a huge amount of damage, so it may not dissuade on its own, but paired with other abilities and skills within the game it can really help the melee shine in locking targets down.

Is Booming Blade Loud in 5e?

Is it audible? Yes. How loud is it? That’s up to the GM really, typically any Thunder Damage spells should be audible. For me Booming Blade make a loud pop, like a gunshot, both when it hits and when it’s triggered.

Can Booming Blade be used with Extra Attack in 5e?

Nope. Since the spell costs an action to use, extra attacks cannot occur, unless something like Action Surge is used, which gives an extra action to use.

Does standing from prone trigger Booming Blade in 5e?

No, the target must move 5ft to trigger the effects of Booming Blade.

This is a much-used spell in my current campaign, and it can be very useful for added damage. Although I think it’s typically more useful on weaker enemies that you want to lockdown. Spellcasters are good targets as you may force them to move magically to avoid the effects. As always I hope you learned a little about the spell and until next time, may your day be a critical success!