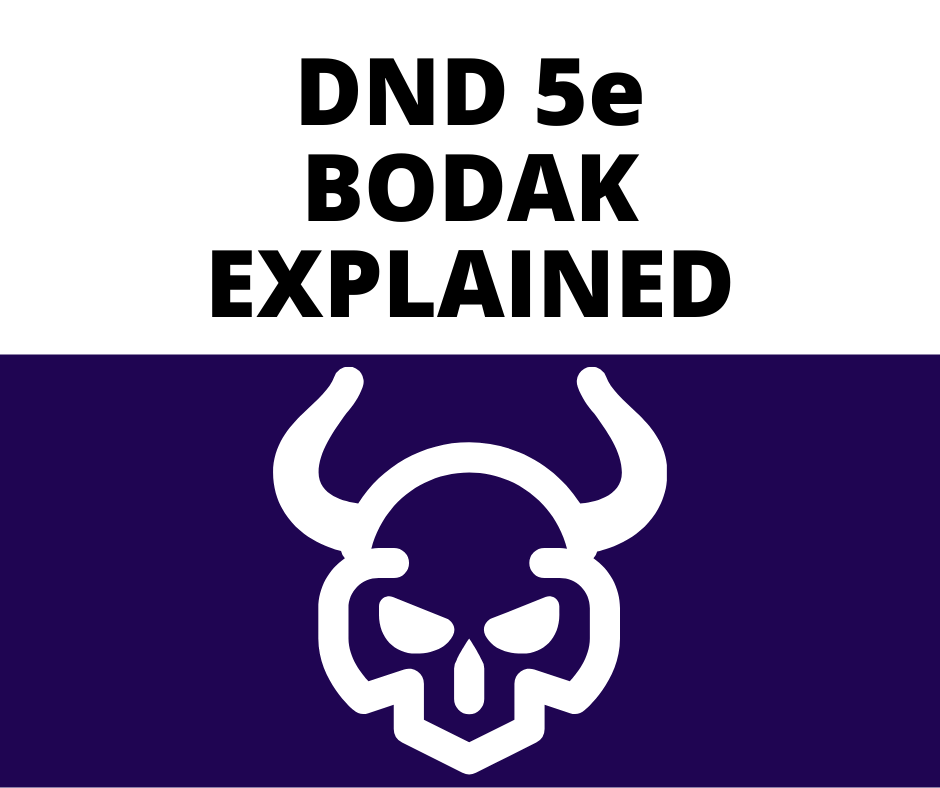 Hey folks, hope the week has been kind to you all! In today’s post, DnD 5e Bodak Explained, we will be covering this spooky undead creature. First I’ll go over what a Bodak is, then go over what it can do, I’ll then give a little bit of flavor using a Bodak, and finally, we’ll cover some questions surrounding the Bodak.

Try to avert your gaze while reading this post, lest you die of fright from the mere sight of the creature! With that said, let’s jump right into the post!

What is a Bodak?

A Bodak is an Undead creature from Volo’s Guide to Monsters. Which is a 5e book published by Wizards of The Coast, which contains a whole host of new monsters for 5e. As a side note as a GM, I highly recommend this book!

As mentioned these creatures are undead in nature, they can be tools used by the Demon Prince Orcus. While he is trapped in the Abyss, the Bodaks can act as his eyes and ears outside of the Abyss. He can even speak directly through them.

Typically, they are created by worshippers of Orcus taking a knife and carving the relevant symbols onto their chest over their hearts. This can transform a worshipper into a Bodak. How long, or how short that process takes is entirely up to you as a GM.

What can a Bodak do?

In DnD 5e, Bodaks have a pretty wide range of things they can do. They have their Aura of Annihilation, their Death Gaze, and their Attacks. They also have decent resistance and immunities.

The aura deals 5 necrotic damage to any creature that ends its turn within 30ft of the Bodak. The Bodak can turn this aura off or on with a Bonus Action.

This feature causes anyone who doesn’t avert their eyes within 30ft of the Bodak to be forced to make a Con Save. If they fail, they take 3d10 Psychic damage.

Interestingly if they fail the check by more than 5, they are actually reduced to 0HP. With the caveat that if the creature is immune to the frightened condition, then they too are immune to this part of the feature.

To avoid this feature, a creature must avert its gaze while fighting the Bodak. This imposes disadvantage on the attack rolls against the Bodak.

Bodaks take 5 radiant damage when they start their turn in sunlight, and they have disadvantage on attack rolls and ability checks.

A Bodak has two attacks, a first attack, which deals 1d4+2 Bludgeoning damage, and 2d8 Necrotic damage on a hit.

It also has a Withering Gaze attack, where the Bodak focuses its gaze upon a particular creature and forces it to make a Con Save. If it fails it takes 4d10 Necrotic Damage.

They can also see with Darkvision out to a range of 120ft, which makes them pretty insane predators in dark environments.

As per usual for these types of posts, I’ll add a little flavour to the mix just to help newer GMs out there get their gears turning.

The party had finally cornered him. The last Orcus fanatic, the leader of the cult. He was alone and wild eyed, looking for an escape where there clearly was none. The cultist resigns himself to his fate. He swiftly takes out his dagger and deftly carves the symbol of Orcus onto chest, just above his heart. All the while he is wildly chanting in Abyssal.

The cultist drops the knife, and is surrounded by a necromantic aura. His jaw unhinges as he screams in agony. His bones snap and break as his limbs elongate. His skin rots and blackens. Deep dark holes now exist where his eyes once resided in his face. As if portals to The Abyss themselves.

The creature lets out an ear shattering screech, as it focuses its gaze upon the party and attempts to put the fear of Orcus into them.

Well hopefully we’ve answered this question above, but to recap, a Bodak is a CR 6 Undead monster with various interesting attacks.

They are quite dangerous, and get increasingly dangerous the more there are due to their passive abilities. So use these fellas sparingly. Y’know, unless you want to murder your party.

What book is the Bodak in for DnD 5e?

They are in Volo’s Guide To Monsters, they can be found on page 127.

As always I hope you learned more about this creature in this post and I hope you are able to add them to your game. These creatures are really cool, and can really add some anxiety to your players, especially if they know how dangerous they can be.

So until next time, I hope your day is a critical success!