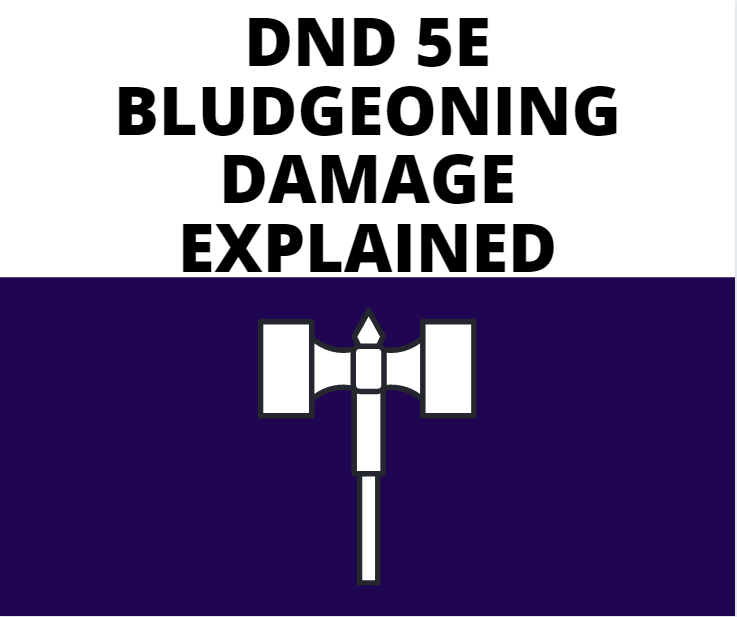 Here we are again! Welcome to today’s post, DnD 5e Bludgeoning Damage Explained. With this post, we’ll look at how bludgeoning damage shows up in your games. We’ll look at some specific examples of both creatures and spells that cause this type of damage.

So let’s see what bludgeoning damage is.

In DnD bludgeoning damage is probably one of the most common types of damage. I would refer to it as mundane damage. By which I mean most of the time it’ll be used is when it comes from blunt melee attacks.

Pretty much every creature in the game is capable of bludgeoning damage. Be it from weapons, or using parts of their body to attack. There are also a small number of spells that can inflict bludgeoning damage as well, although it’s not a huge list.

Now let’s look at some of the specifics!

Like we mentioned above, the list of creatures that can cause bludgeoning damage is huge. It’s nearly every single creature. So we’ve picked some creatures which represent the different ways in which it can be inflicted.

The Thug is a generic enemy in the Monster Manual. Which means they are meant as a template for the DM to chop and change as they see fit. The standard one however uses a mace as their main weapon. Maces are blunt weapons, and typically deal 1d6 bludgeoning damage.

As mentioned some creatures will use parts of their bodies to attack, now this could be claws, teeth, or other appendages.

The Mimic is a creature many will know even if they do not play DnD. It’s a creature that can disguise itself as mundane objects, most are familiar with them disguising themselves as a chest that lures unsuspecting victims to look inside. When they do they find themselves stuck to this “chest” which then will attempt to eat their now caught prey.

Mimics are formless creatures, very similar to oozes, because of this they have what is called a pseudopod attack. What this means is it makes a fist out of any part of its body which shoots out to swing at the target. The target could be behind it, above it, below it, and it would just extend a part of its body in a quick hit on the target. Typically deals 1d8 bludgeoning damage.

We then have enemies that use their whole body weight to crash into their targets in lieu of a weapon.

The Animated Armour creature is one such enemy. These creatures are armor which has been brought to life by magic to protect areas for their wizard masters. These creatures could of course be given weapons by a DM, there is no harm in doing so, well except to your players!

However, if they don’t have a weapon, these creatures will slam themselves into their targets dealing 1d6 bludgeoning damage.

Bigby’s Hand is a spell that’s quite famous now, especially thanks for Critical Roles own Scanlan character. The spell works by summoning a large arcane hand, think of it as a more serious version of the Mage Hand spell.

The hand can do many things it can punch, which causes force damage, it can push creatures a decent distance away, it can provide cover from attacks and spells, and it can also grasp hold of creatures. When it grasps a creature it squeezes them causing 2d6 bludgeoning damage.

Some spells can inflict this damage type on both structures and creatures in interesting ways.

Earthquake is one such spell. This spell can open fissures in the ground which can be as large as 10 feet wide, 10 feet long, and 10 feet deep. This can cause creatures to fall into them. However, what we’re interested in is the other effect from the spell, which his when it’s used near a structure.

Then we have spells that are just all about hitting something really hard.

The Tsunami spell causes a massive 300-foot-long, 300-foot-high, 50-foot-thick wave of water to sweep across the target area. When a creature is hit by this spell they take 6d10 bludgeoning damage and are swept along with the wave. They continue taking damage every round of combat until the spell fades after 6 rounds, assuming they don’t manage to escape.

This a very variable damage type, it doesn’t really have a specific “form” it takes due to the sheer amount of places it can come from. What we’d say to keep in mind is that it’s when a creature takes some kind of blunt force damage.

For instance, say a Hill Giant smashes a player with its greatclub, I’d describe it as such.

As the lumbering hill giant staggers towards you, towering well above you, it raises its massive oak tree-sized club above its head and brings it crashing towards you. It slams into your armor which does little to help, you feel ribs break from the pressure, you take 18 bludgeoning damage.

So as always I hope this has given an insight into one of the most common damage types in DnD 5e, and how it will show up in your games, be it from mundane sources like weapons or fists or from powerful spells.