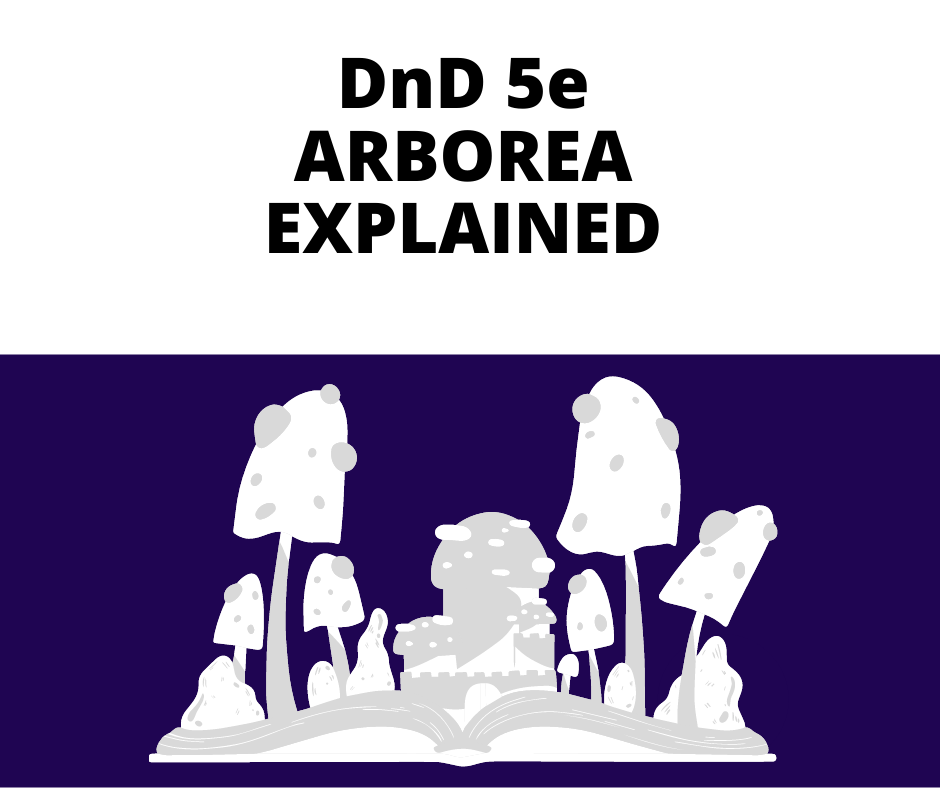 So get ready and try not to be overwhelmed by the sheer beauty of nature as we dive into this week’s post!

Arborea is a 3 tiered plane of existence. It consists of 3 layers, Arvandor, Aquallor, and Mithardir. Each supports different forms of life. The most notable layer is that of Arvandor, which effectively the afterlife for, most, good-aligned Elves.

It is the home of the Elven Court as well, ruled typically by the Elven Deity Corellon and his court. The court has great control over the realm of Arborea and is layers, allowing those who have passed here eternal enjoyment of the afterlife. Great hunts, feasts, and parties take place all across the top layer of Arborea.

However, Arborea is not without its danger. There are beings that reside here known as the Bacchae, who are similar in behavior to Satyr’s, in that they endlessly party, prank, and generally carouse around the forest laden layer of Arvandor. While not inherently dangerous the way a demon or devil may be, they are able to magically convince travelers to join their endless party. Since they have no need to consume food, it is never even considered. Travelers to Arborea have been known to die from starvation while charmed by these creatures.

As mentioned, there are three layers within Arborea, and they have distinct features.

Probably the most well-known of the layers of Arborea. This is the afterlife for many good-aligned elves. This layer is endless in the abundance of nature, expansive forests boasting massive trees, fields, and fields of orchards, wheat, barely all maintained by the plane itself. The forests are often clear of undergrowth and the trees have grown to such sizes that they do not impede anything on the forest floor which is covered with velvet moss.

This is why most creatures who venture to Arborea pretty much exclusively go to Arvandor since it is the most habitable plane for travelers from the material plane. The beauty is unmatched across all planes. Those who call this plane home are happy to do so, and they are able to participate in the great hunts, feasts, and festivities that occur on a daily basis here.

It is also the home of Corellon and his court, who oversee anything and everything within the entire plane. The court is made up of lesser deities, headed by Corellon. Each member of the court typically deals with their own areas of influence within the realm. Keep in mind the members of the court aren’t necessarily deities the same way Corellon is a true God.

Interestingly this plane is very much like the Elemental Plane of Water, where it is an endless ocean. Although unlike the plane of water, it has a top and a bottom. This layer is as densely populated as Arvandor, but much less traveled due to it being entirely water. The full beauty of the sea is on full display here as well with coral reefs stretching as far as the eye can see, utilizing the entire spectrum of colors.

This layer is also home to the Sea Elves, as well as their deity, Deep Sashelas, a member of Corellon’s Court.  These Elves have their own sanctuary here, living with the changing tides of the massive ocean.

One thing to note about the massive ocean here is that it’s considered the endpoint of the River Oceanus, the one I mentioned in the past few posts that stem from Elysium. It is said that there are portals in the depths that lead back to the headwater of the river, which would then effectively make the river circular in flow, that it loops back into itself. This is a cool way to have creatures from other planes move around the other planes.

This is actually a really cool one, although it’s a bit sparse. Basically, this layer is effectively dead. It is said to be a desert of white dust stretching as far as the eye can see. It was once considered to be home to a lost race of giants or titans. Not much is known about these beings, but relics of their presence in Mithardir can be found, ruins can be found just poking out of the desolate landscape.

Be aware though, this is one of the most dangerous places to be in Arborea. The winds here can erupt at any given moment, and cause sand storms so violent that it can apparently grind mortals to dust. Since the layer is uninhabited, there is very little cover, if any at all from these storms.

Many creatures call Arborea home, so it would talk a long time to discuss them all, but here are some of the major people of collection of people that you might find.

The creator of the Elves, Corellon calls Arborea’s 1st layer Arvandor, home. This is where he set up his Court and filled it with other beings that were able to assist in the overseeing of Arborea and the interests of Corellon. Enemy of the Drow, and their God Queen Lolth, Corellon strives to make Arborea the true homeland of the Eladrin and the Elves.

The Eladrin are akin to Proto-Elves. They were what came before the Elves. They have more royal-looking features than the standard material plane elves. In fact, a lot of the royalties and leadership of the Elves on the material plane directly stem from how Eladrin-like an Elf might be.

Within Arborea, there are two main types of Eladrin, one known as the Ghaele who are powerful hunters who provide the sustenance for the feasts held all across Arborea. Then there are the Firre, who are protectors of beauty and art, these Eladrin are more known for assisting in shaping Arborea allowing it to retain its unrivaled beauty.

Just like with the other outer planes there are petitioners here, basically the most common beings, usually souls of those departed from the Material Plane. One type is what I mentioned, the souls of departed Elves, they are transported to this plane and get to live as celestial beings in Arvandor.

Another is that of The Chosen of Arvandor, who are akin to guardians who serve Corellon in their elven form.

There are others known as the Bacchae, who are spirits of people who enjoyed the moments in life, those who lived for celebrations, parties, and very likely the other interests that usually come with those particular pleasures. They appear as a half-humanoid half-beast, very much like Satyrs. They are very welcoming of strangers to their celebrations, but be aware that joining their celebrations can lead to a stupor that will have you so enraptured that you will die from starvation. So be careful of the Bacchae.

What is Arborea in DnD 5e?

To sum up the post, Arborea is a three-layered plane of existence that is considered by most to be the Elven equivalent of Heaven/Elysium. The most well-known layer is Arvandor which is home to the deity Corellon and boasts some of the most beautiful forests in any plane of existence.

Where is Arvandor in DnD 5e?

Arvandor is the topmost layer of Arborea. Beneath it is Aquallor, an endless ocean, and beneath that is Mithardir a desert with the white dust of the ruins of a lost race of Giants.

How to get to Arborea in DnD 5e?

The regular ways as always, plane shift and similar spells of course work here. However, Arborea is known to have portals that go between The Beastlands and Ysgard. There are also vortexes within the 2nd layer Aquallor to the Elemental Plane of Water, but you have to be very brave, crazy, or stupid to want to go diving into an unknown vortex of water.

This was a cool one, I didn’t know about Mithardir, which has a really cool vibe with the lost race of Giants, one of the sources I read said they might be considered Titans, which could be an even bigger race of Giants. It could be a very cool adventure arc, finding out what happened to them, what caused the disaster that destroyed their home and forced them to potentially leave or be buried in the ruins.

As always I hope you learned something new as well, so, until the next post, I hope your week is a Critical Success!