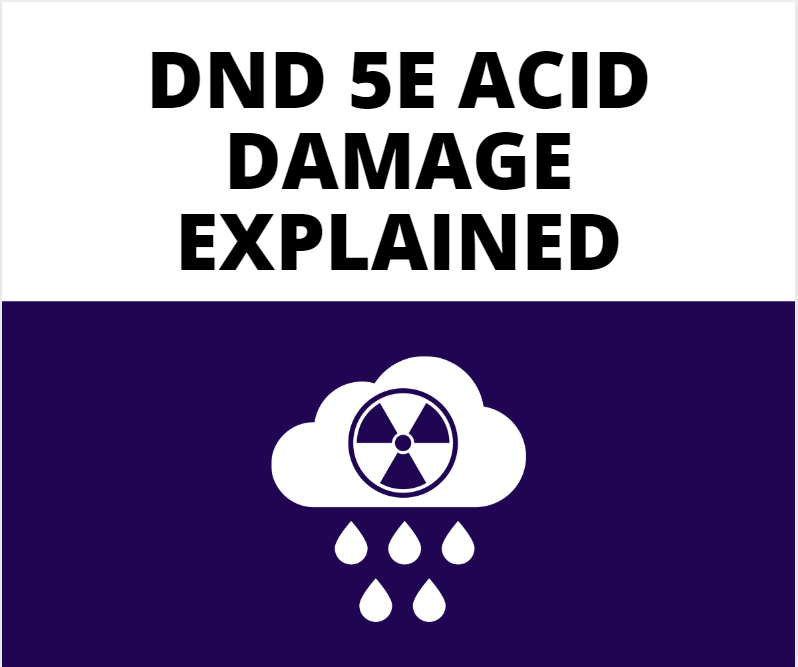 In this post, DnD 5e Acid Damage Explained, we’ll be taking a quick glance into acid damage and when and where it may show up in your campaigns as well as some considerations for both DM and players.

Now we’ll have a quick look at some of the ways acid damage may show up in your game.

Acid damage is a damage type that can show up at really any level of a campaign. There are many creatures and spells which cause acid damage.

Creatures with tentacles dripping with corrosive slime, like Flumphs

Black and Copper dragons, which can spray massive amounts of highly corrosive acid laying waste to entire cities if they so desired

Oozes which are made of living acid and engulf their targets to ingest them, like a Gelatinous Cube

Really anything big enough to swallow a person whole, like a Purple Worm, which will then cause acid damage to the creature its swallowed when it reaches its stomach.

So we’ve learned that most of the acid dealing creatures are incredibly creepy and generally awful to fight. So DM’s make sure you throw lots of these at your players to watch them recoil in horror.

Of course, there are also spells that cause acid damage as well, some of these spells do acid damage because they allow the caster to pick any damage type to cause when they cast the spell. Some naturally do acid damage.

Hunger of Hadar which summons tentacles from the ground which cause acid damage when creatures are near them.

Prismatic Spray is interesting because it shoots a beam of 7 colors, and if the green beam hits a target it does massive acid damage to them.

The range of acid spells is actually pretty decent, so for a spell caster trying to evoke an acid theme has a lot to work with across the different level ranges.

Interestingly enough there are also a couple of interactions with acid damage for creatures. Either healing them or preventing them from naturally healing.

If acid damage is inflicted on a Clay Golem, it actually heals the golem.

There are also Trolls, which if acid or fire damage is inflicted on them.

Finally, you can also utilize traps that your bad guys have laid for the heroes of the story, literal pits and pools of acid or acid that pours from a trap in the ceiling. Those are always DM favorites.

When acid damage shows up in my games, either as a player or a DM, I always like to emphasize the melting aspect most extremely corrosive acids have.

So depending on the type of surface it touches, be that stone, wood, metal, or flesh I generally mention how it bubbles and hisses as it hits the surface, mentioning smoke coming from the target.

The way I imagine that spell is like the caster effectively hurls a quick spray of clear acid from their hand or arcane focus. Dousing the target(s) in acid.

However, when it’s a creature that using its own naturally occurring corrosive liquid I tend to get a little more descriptive on the color.

Having tentacles dripping with purple acidic ooze, or a dragon spraying an almost nuclear green stream of acid from its mouth are ways DMs can get creative with their descriptions.

So that’s our quick dive into Acid Damage. Hopefully, it’s helped you understand how this kind of damage will show up in your game and how you can get a little creative with the descriptions.