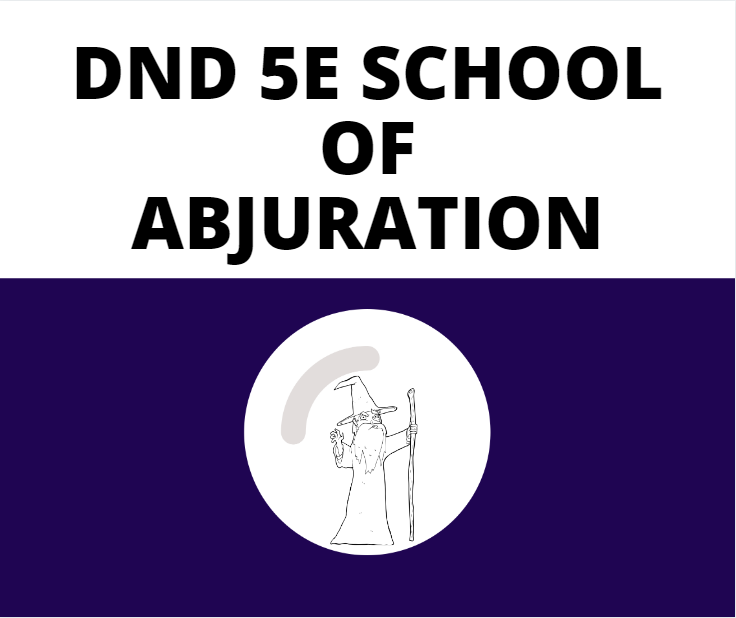 Hi everybody! In today’s post, DnD 5e Abjuration School of Magic Explained, we’re going to be looking at the school of magic that protects the caster and their allies. As is a staple now, we’ll have a quick look some basics of this school, we’ll look at some specific spell examples, and then round it out with how I would describe certain abjuration scenarios.

So with all that said, let’s have a look at the school of abjuration.

Have you ever wanted to put a protective bubble around yourself? Or snap your fingers and banish that person off to another dimension? Well then maybe you would be interested in abjuration. This spell school typically focuses on protecting the caster and their allies from attack and spell effects.

Abjuration spells can give the caster extra armor to up their AC. It can give them resistance to certain damage types. It also protects from things that aren’t as directly harmful, such as allowing the caster to designate an area that effectively triggers an alarm in their head when anything enters that area. As well as designating an area that is hidden from vision, from hearing, and from detections spells from divination magic. It also is the school that is responsible for removing magical effects from items, objects, and creatures.

So as said above the caster can designate an area to alert them when something enters the boundaries of that area.

“This would be the Alarm spell. This spell allows the caster to choose an object, like a door (or other entry/exit point) or an area up to a 20-foot cube. The caster can choose people that won’t set the alarm off, and the alarm can be mental or audible. When a non-designated creature touches the object or enters the boundary of the area, they set the spell off, either triggering the mental alarm in the casters head (they can be up to 1 mile away from the alarmed object or area) or causing it to make an audible alarm sound for 10 seconds within 60 feet of the area/object.”

On the higher end of the scale, a lot of the aspects of abjuration and be combined, creating powerful effects that can negate just about any magic in the game.

“Antimagic Field is one such spell. This spell creates a 10-foot-radius sphere around the caster. Inside the sphere, they are protected from any magical effects. This means that the caster and anyone inside the sphere cannot be targeted by spell effects. Even area of effect magic such are fireball does not penetrate the sphere. Magic items cease to work within the sphere, and summoned creatures that enter the sphere or are inside it upon its initial casting and dispelled immediately.”

The interesting thing with abjuration magic is it tends to be invisible. I do tend to give some description of how it looks either upon the initial casting of the spell, or certain sustained spells may have some visual aspect to them. Such as Mage Armor, I like to imagine it as an ethereal looking armor that the caster is adorned with.

So let’s say that an enemy of the party casts the abjuration spell Banishment on the party’s fighter, this is how I would go about describing it. Again let’s assume for the purposes of this, the target has failed their saving throw.

“Finally face to face with the leader of the cult, the fighter rushes towards the wizard axe raised high about their head. The wizard smirks and looks at the fighter and raised their hand. The wizard weaves the arcane symbols in the air. With a quick pop, the fighter vanishes from sight. The fighter finds themselves in a barren wasteland. No concept of where they are they shout out and hear nothing nor see anything all around them except the whistling of the wind, and the dust that makes up the landscape of this place for miles in every direction.”

As always, I hoped this post helped you understand more about the school of abjuration and the role it plays in the game. I hope that my descriptions of the spells will help enlighten you in describing these effects in your own games, be you a player or a DM.