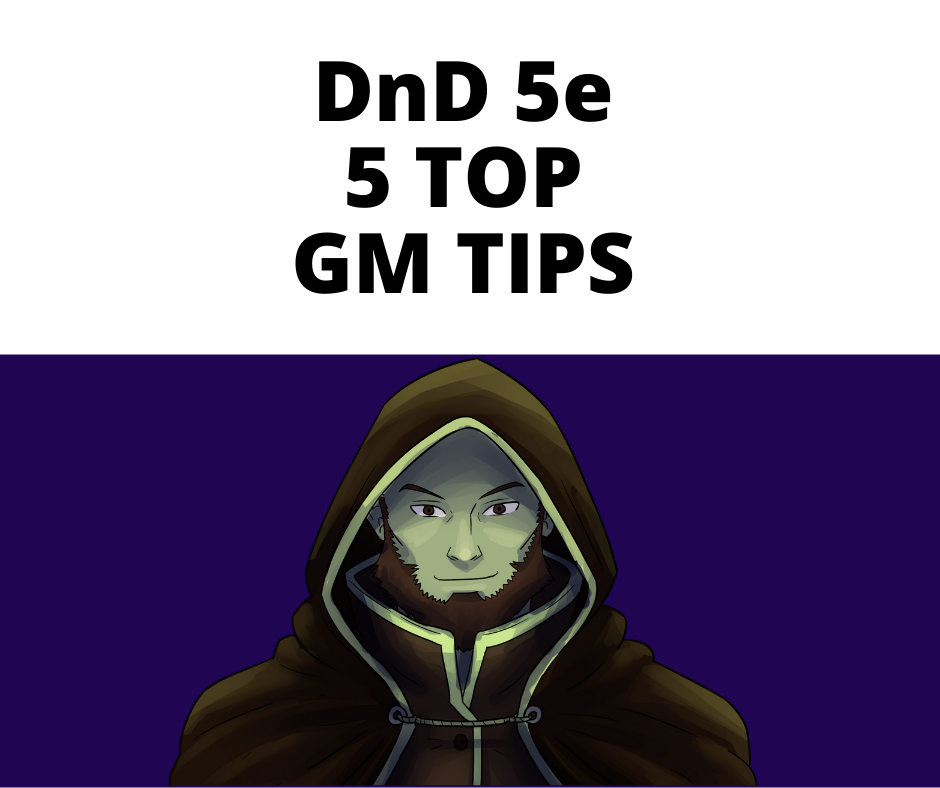 Hey folks! Trying something a little new! In today’s post, DnD 5e 5 GM Tips, I will be covering my top 5 GMing tips that I think will help any budding GM with falling in love with the game, and not be shackled to the rules or making it like other popular DnD games.

So make sure you’ve got your notepad and pencil out, as we dive into this week’s post!

You’ve likely heard the tip for any RPG GM to “not over prepare”, which while true, is a bit of a wishy-washy tip, at least in my opinion. The idea of over-preparing requires a context of what exactly should you not over-prepare. Which is what this tip is all about.

You cannot prepare for every eventuality your players might do, but you can have your world and its lore prepared in advance. If you know what’s happening in nearby towns and villages, or in local woods and caves, then you’re able to relax about where your players might go and what they might do.

You don’t need to have anything more than a couple of lines of text. I literally had a one-line piece of text for an Elven city, that said the city was protected by a fog that caused hallucinations. The players decided to go to that city earlier than I had anticipated, but due to having even a slight inkling of what was going on there, we had one of the best sessions, and 90% of it was improvised, other than the fog concept. We spent a whole session in the fog, which then bought me time as a GM to prepare the city for the next session.

So that’s my real tip, don’t be afraid to improvise. As GMs or DMs we spend a lot of time planning and writing, well at least I do anyway. So that “muscle” of preparing is always being worked on. However, improvising is another muscle, that you need to work on. It will be hard at first to let go and just flow through, but you will quickly learn how to think on your feet, using even just a small amount of prep, and be able to turn that into numerous sessions.

Sometimes I read about the woes of GMs in the DnD landscape, and I often think to myself, wow, it sure sounds like they’re putting a lot of pressure on themselves. I’ll be real clear on this one folks. DnD is a game, one that’s played together as a group. Yes, as a GM you have more responsibilities, but you are still a player of the game. If you ever find yourself not enjoying GMing (and it’s not for external reasons, like work or school-related stress) then you need to think about why and correct that.

I’m not saying that you should quit, but really ask yourself what you enjoy about the game, and why it’s failing to live up to your expectation of enjoyment. As DMs we can often not see the forest for the trees, we lose ourselves trying to do things we might not even enjoy.

What I’m really saying is, always think about the very basic ideas of GMing, does the current story excite you? Does it make you want to write? Are the PCs engaging with the world? If the answer is no to any of these, then you need to take a step back, and revaluate, because at the end of the day, you’re there to have fun, and if someone isn’t having fun, then why play?

GM Tip 3 Rules Are a Guide, Not Law

This is a simple one, but one I feel like I often see ignored. I hope Wizard of The Coast forgive me for this, but really, none of the books matter, other than the basic concept that makes up DnD. Way back when I first started my Game Master journey just over a decade ago, I would run games that almost had no rules. I would just have very simple RPG stats that players would roll for, and then everything else was either a D20 roll or a D6, and people had a blast. Which is really all that matters.

Now, of course, I’ve spent more time learning the various aspects of DnD, and I’ll be honest, from session to session, I forget rules, misread them or even just misinterpret them all together. The best thing is to keep the game flowing to do that you will likely need to make a reasonable call regarding rulings, especially those niche ones that come up once in a blue moon.

However, you’re also completely free to disregard, change or adapt any of the rules as you see fit. As the GM, it’s your game and your particular flavor of DnD. Just be consistent, that’s all you need. If you make a ruling on the fly, either that is the rule from now on, or let your players know that you will clarify the rule after the session. Your players need to know what the rules are, either your versions or the games versions.

My biggest tip here is to have a space in your notebook (digital or not) or a channel in your Discord (or whatever you might use) to keep a note of these rulings. It just makes it easier to keep track of. Also, I’ll add, if you make a ruling, and after a few weeks or months, you decide you don’t like it, talk with your players, and if they’re happy to, just change it. Nothing is set in stone here.

It’s really easy for GMs to get stuck doing effectively the same thing over and over, but with different coats of paint. Find the MacGuffin, kill the powerful Demon/Devil/Fey/Creature. While that’s all well and good, make sure while doing these things, you try new things.

I hope to start creating more content based on unique quests or ideas you can implement in your games, but for now, you’ll need to do your own thinking and research and consider adding different things to spice up the content of what your players might be doing.

For me, I’m super comfortable with the typical, get a quest, go to a place, kill or collect a thing (probably in a dungeon or other dangerous place). However, I do try to sprinkle in plots that I’m not as comfortable running, like political intrigue, or heists. It adds so much to your game your players will be thanking you. It gives them a challenge that might go beyond their usual abilities of crushing skulls.

So make sure you add this kind of stuff in, and even if you do it in small amounts, you’ll get a feel for it yourself, and how your players enjoy it. From there you can start to have more focus on those aspects, if both you and your players enjoy them.

GM Tip 5 Be Firm but Fair

My last tip for this entry is based on something I see a lot in the online DnD communities. I get that the typical DnD player might have more trouble with real life conflict or social situations (I’m going off personal experience here) but as the GM, you need to set the standard. You cannot let people push your game around. There is a saying that runs very true, “No D&D is better than bad D&D”. Always keep that in mind, while it might be sad to kill a game or a campaign you once enjoyed, if it’s no longer a source of enjoyment, let it die. By all means, do what you can to fix it, but some things cannot be fixed.

However, the point of this tip is that if you find that a player is causing problems in your game, either with the way they are playing their character or the way they are acting at the table (virtual or not) then it is your duty as the GM to resolve that.

Personally, I’ve had some tough conversations with people who were close friends of mine at the time about their behavior at the table, and I’ve had wildly different responses. I once knew someone who threaten to stop being friends with me because of a ruling he disagreed with. I’ve also had to tell very close friends that they were on thin ice because they kept having to bail on sessions at the last minute.

These can be weird conversations because the context is that we’re disagreeing over a game of make-believe. However, you have to keep in mind that not only are you putting in a lot of time (usually) to make this game happen, but the other players are also setting aside time in their lives for the game. D&D is a commitment of time, when you agree to GM or to play, you are making a social contract, in which you are agreeing to the terms of playing at the designated times. Now, of course, rescheduling is fine, but should not occur too often. Ultimately everyone’s time should be respected because they are setting that time aside to play the game.

There are times when you as the GM will need to have these conversations, and as the tip states, you have to be fair, but you have to be firm. If a player continues to disrupt your games, either by not showing up for critical sessions or continually disrespecting you as the GM during sessions (a lot of these issues should be handled outside of game time) then you are well within your rights to tell them that your table is no longer a good fit for them.

This is a bit of a new series I’m trying out. I feel that sometimes in my posts about specific spells or locations, that sometimes I try to put across some of the tips I have for other GMs out there, and it gets lost in the sauce of the bigger, more specific posts. So I hope this one will allow me to share and sometimes pontificate on tips that I think will help make you a better GM, be you old or new.

As always I hope you learned something from this post, and I’ll leave you with a question I posed to my Discord: –

Let me know in the comments, or feel free to join the discord and have a discussion with me and the community. Until next time, I hope your week is a Critical Success!