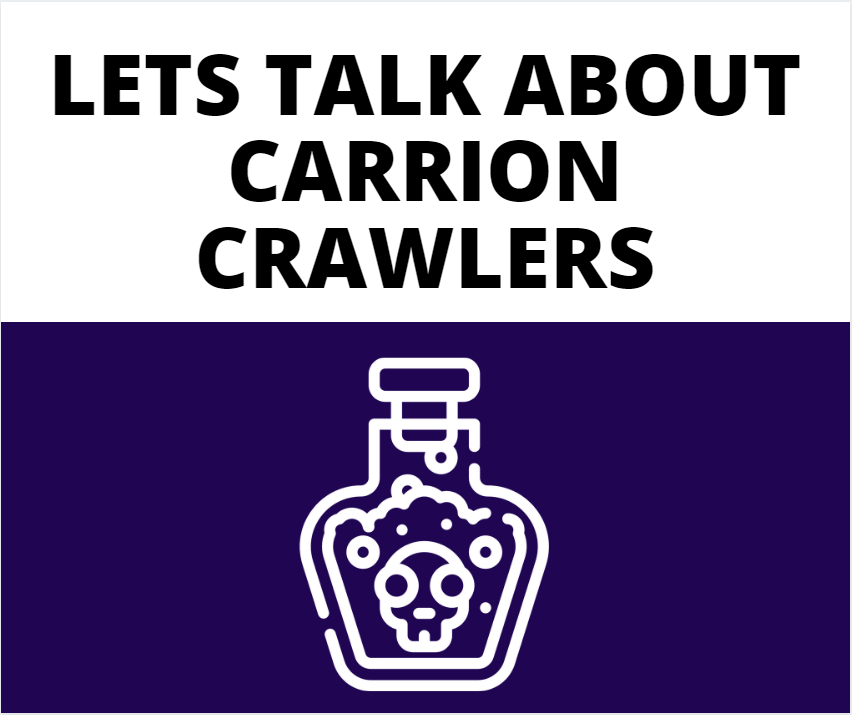 Happy Sunday everyone! In today’s post, Carrion Crawlers in DnD 5e, we’ll be talking about these large creepy-crawlies that inhabit caves, sewers, and anywhere dark and filled with death. I’ve read horror stories about these creatures decimated parties, when you look at their stat block, they don’t seem particularly threatening, so GM’s will just throw them in a random encounter in a cave system, or in the Underdark, sometimes to disastrous consequences.

So let’s take a closer look at these creatures!

In 5e, these creatures are scavengers. They look like giant centipedes, like bigger than a person giant. They can be found in natural ambush spots, pretty much anywhere in the world, but they do seem to prefer the dark. They are capable of climbing along walls and ceilings without any effort, scurrying along, or patiently waiting to ambush their prey.

What truly makes them dangerous is their attack. If lady luck is angry with the party for some reason, and some bad luck hits them, then a fight with a couple of Carrion Crawlers can be a blood bath. When their tentacle attack hits a creature (keep in mind it also has a 10ft reach) it must make a Con Saving Throw (check out our post on Saving Throws) if they fail it, the target is poisoned for 1 minute. This poison paralyzes the inflicted creature for the duration. During this time, the creature can make subsequent saving throws at the end of each of its turns to try and shake off the poisons and its effects.

While this still not sound like much, if you have a party of 4, and the battle between the Carrion Crawlers and the party is a “hard” encounter, with the way D&D works in the balancing of the combat, as soon as someone is paralyzed from the poison, the advantage in the fight shifts in the creature’s favor. Even more so if it happens to take out some of the front line party members, allowing the creatures to attack the squishier targets.

As always here’s a little flavor on how I might describe the Carrion Crawler leading up to the actual combat encounter.

As you all follow the lone path through this narrow part of this cave system, the stench of death reaches your nostrils. You all instinctively move a little quieter and keep your head on a swivel. You see up ahead in the darkness that the cave takes a sharp turn left, but you can almost make out something resting on the wall. You move a little closer, loose rocks crunching beneath your feet, as the light of the torch reaches whatever is on the wall, it skitters at lightning speed further around the blind corner, you hear the sound of many little feet skitter along the stone further down the path. As you peek around the corner to see what you’re dealing with, you feel something drip onto your neck, and you slowly look up and are met, almost face to face now, with a screeching, hungry Carrion Crawler.

Hopefully, this little post has helped you all a little with how this creature might fit into your game, and also serve as a warning as to how quickly a battle with even just a couple of them can spiral very quickly out of control. Thanks for taking the time to have a read through this post and until next time, may your day be a critical success!