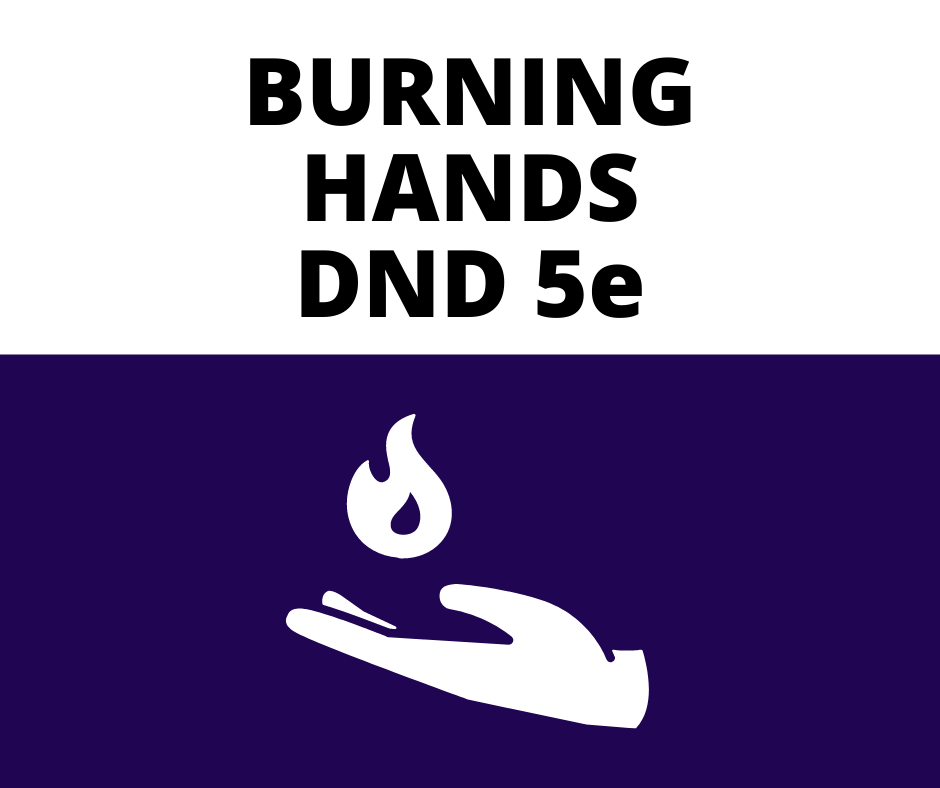 Hey folks, I hope all is well! In today’s post, Burning Hands DnD 5e, I’ll be looking at this blisteringly good spell. I’ll quickly go over how it works, then give a little flavor on how to use it, then answer some burning questions.

So get ready with your ice packs and let’s dive into the post!

First off, this spell is a 1st level evocation spell. It has a casting time of 1 action, it can only be cast on creatures within a 15ft cone from the caster. Only Sorcerers and Wizards can cast the spell.

The spell is a simple one, it forces the creatures affected by the spell to make a Dex Saving Throw, if the affected creatures fail the save then they take 3d6 Fire Damage. If they succeed, they only take half damage.

It also has an additional effect where it will set alight any objects capable of being on fire that isn’t worn or carried by another creature.

As I mentioned, this spell is an area of effect spell, meaning it can hit a bunch of creatures at once. So any creatures caught in the 15ft cone will get blasted by the spell. It’s a good early-level area spell. So use it when you can get a good number of enemies in the area.

As always for the spells I explain, I like to add a little flavor to the mix so here is the flavor for burning hands!

The sweat pours off the Sorcerer as she runs down the hall away from the goblins, but they’re hot on her tail. She can hear them laughing, but they won’t have the last laugh. She keeps running, turns the corner, and hits a dead end. She turns and sees the goblin have slowed and are walking towards her with their dagger-like teeth on display in hideous smiles. As they get closer she drops the act, and starts to laugh, “Burn in hellfire!” she shouts as she raises both her hands, palms flat facing towards the sky and thumbs touching, a wave of orange mist-like energy sweeps over the goblins. They start screaming in pain as the Sorcerer watches them burn to cinders.

It’s an okay spell if you can make it work for you. Since you can’t choose who in 15ft cone is hit by the spell, then it can be easy to catch allies in the spell. Making it harder to use. However, since it’s a low-level spell, the trade-off can be worth it.

How many times can you cast burning hands?

Can you cast burning hands with one hand?

Yes of course. I think the spell description sometimes can trip people up since it does mention bringing the two thumbs together. However, this is just flavor in the spell.

Think about the scene in Doctor Strange where the guy with one hand shows he can do magic just as well as anyone else. In my eyes, this is the same in DnD.

Can a Warlock learn burning hands?

Yep, they sure can. Although they either need to be a pact of the fiend warlock, or they would need to take appropriate feats to learn the spell.

As always I hope this post helped you understand this spell a little more. I hope you enjoyed my little flavor text. So until next time, may your day be a critical success!