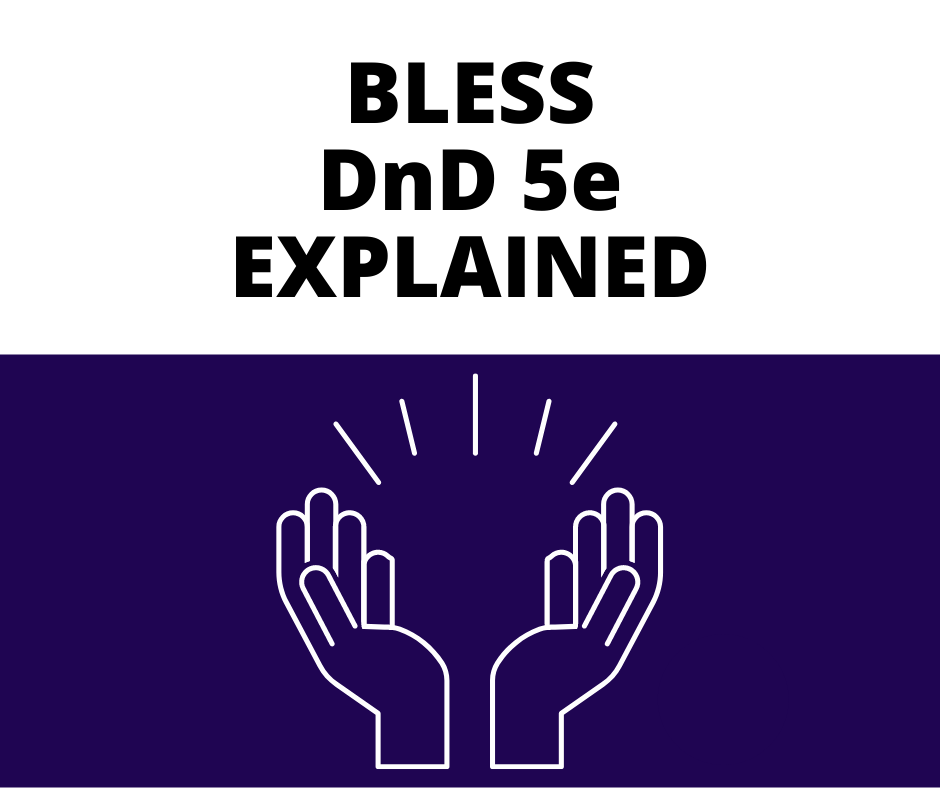 Afternoon folks, hope you all are having a good one! In today’s post, Bless DnD 5e Explained, I’m going to go over this simple but useful spell. First I’ll go over how it works, then how to use it, then finally I’ll answer some of the burning questions surrounding the spell.

So kneel before the Gods and their might and get ready as we jump right into today’s post!

In DnD 5e Bless is a 1st level enchantment spell, that takes one action to cast and can be cast from up to 30 feet away from the chosen targets. It’s a concentration spell that lasts up to one minute and can typically only be cast by Clerics or Paladins.

The allows the caster to pick three creatures and bless them. The blessed creature then gets to add a D4 to any subsequent attack rolls or saving throws they make.

How to Use Bless

As you can see from my description of the spell, it’s a simple one, but, it is a pretty powerful one. The spell effectively makes the party harder to hit with anything that requires saving throws, and their attacks hit true ever more often.

The way I’d tend to use this spell is to cast it at the beginning of a fight and try to keep the spell going throughout. Keep in mind it is a concentration spell so the caster who initially used the spell will need to avoid getting hit too often or pray to their Gods that their Con Saving Throws (that’s what’s rolled for concentration checks) are on point.

Since it’s up to 3 creatures, a caster could likely bless most of the party. If there is more than 3 in the party, it could be useful to up-cast the spell to a higher level. As each level above 1st allows an additional creature to be blessed.

Is Bless good in 5e?

I’d say so. As with a lot of the early spells they drop off a little as levels increase, but for the first half dozen levels? I’d say Bless is a keeper for sure.

Is Bless overpowered in 5e?

Some consider it a little strong. In my opinion, while it’s a good spell, and can still be helpful in the later levels, I really don’t think it’s overpowered at all.

Does Bless work on Death Saves in 5e?

Yes! As long as the caster is still concentrating on the spell, Bless will assist Death Saves.

Is Bless or Bane better in 5e?

As mentioned in the previous post it’s a toss-up, do you want to help your party, or hinder your enemies? For me I’d say I like Bless a little more, I prefer to assist my allies. Mainly because targets that die with Bane reduce the overall effectiveness of Bane, whereas Bless is more likely to stay on my allies until the end of combat.

Bless is a great little spell, it can be extremely useful at all levels of play. Having bonuses to your Saving Throws and Attack Rolls is really powerful no matter what stage of the game, so for a 1st level spell, this one is sure to stick with you throughout your adventures.

As always I hope you learned a little about the spell and will consider it a good pickup for your holy characters. So thanks for reading the post and until next time, may your day be a critical success!