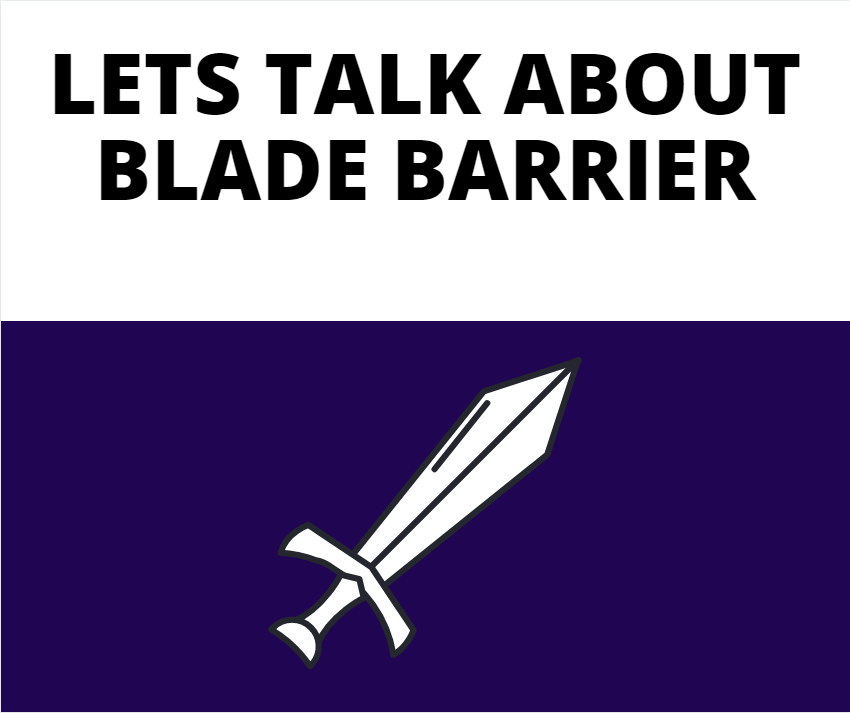 Hope everyone’s having a good Sunday! So in today’s post, Blade Barrier in DnD 5e, we’re going to talk about the high-level cleric spell which is sure to cut your enemies to ribbons.

As mentioned above, Blade Barrier is a Cleric only spell, this spell is quite high level, a level 6 spell to be exact. This spell creates a barrier (duh) between the enemy and the caster. It can be used to make a completely straight wall, or it can create a circular wall. Enemies that walk through it take a large amount of slashing damage (see our post on Slashing Damage).

So let’s not beat around the bush, let’s dive right into this!

So I alluded to the aspects of this spell above, it’s a 6th level Cleric spell, meaning that they wouldn’t have access to this spell until they were at the least, level 11. It creates a barrier of blades (again duh), which shred any enemies that try to pass through the barrier. It does 6d10 slashing damage or half as much if the enemy makes the Dex Saving Throw (see our post about Saving Throws).

When the spell is initially cast, it can be set with the following parameters. It can be up to 100 feet long, 20 feet high, and 5 feet thick or it can make a ring up to 60 feet in diameter. So this makes it pretty customizable for any given situation where one would want a barrier of blade protecting you.

It’s a very cool spell because it could be used both offensively and defensively. A caster could use it to place a barrier between them and attacking foes to provide cover, or even just enough of an obstacle/deterrent for the caster to get to safety. It could be used to place a ring around a pretty large group of foes, meaning they’d have to bypass it via other means, or walk right through it, or wait. 6d10 damage is nothing to scoff at regardless of the foes you’re fighting.

As is standard for me by now, y’all know I like to add a little bit of flavor descriptions for spells so that budding DMs can start getting their cogs turning on how they might describe it in their game.

As the party emerges from the dusty, undead ridden, catacombs with the book they had been tasked to retrieve, they can spot from their slight vantage point, a large force of Orcs, painted for battle. After using most of their spells and tricks within the catacombs themselves, they felt all hope was lost. The Orcs charged them, dead set on acquiring the book their master needed. As the party gripped their weapons and readied whatever spells they had left, Izoth, the Cleric, steps forward, raises her hand, and grips her holy symbol around her neck. Her eyes light up with the light of the Divine, and a shimmering wall made up of razor sharp shards of pure white energy spreads out between them and the Orcs. The front lines of the Orcs are cut down as they try to force their way through the barrier, leaving only a handful of the smarter ones, an easy task for the party.

Hopefully, you got something out of this quick post on the spell Blade Barrier, and hopefully, my little flavor on how the spell could be used and described has allowed you to think of your own ways to describe such a high-level spell. The reason I like to add these “flavor” sections is that I feel if you’re a player and you cast a high-level spell, you want to have it mean something, have it be memorable, so it’s up to you as the DM to help make that moment a memory for your game or campaign. As always thanks for taking the time to have a read through this post, and until next time, may your day be a critical success!