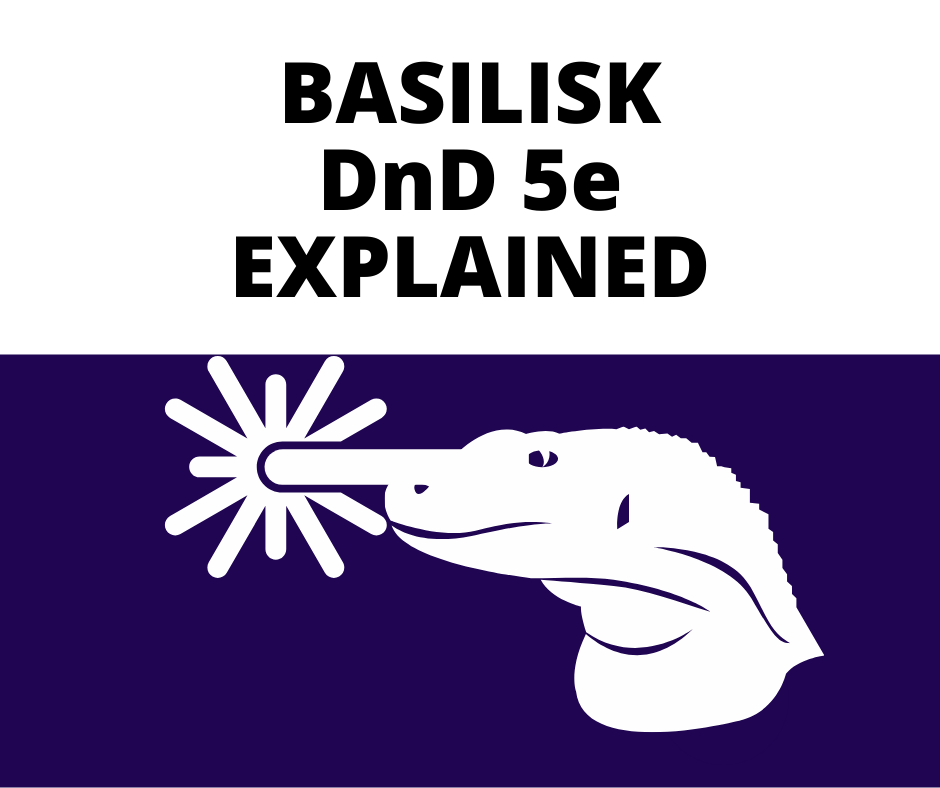 Good day folks! In today’s post, Basilisk DnD 5e Explained, I’ll be going over this iconic creature that comes from our own mythos and DnD legend. First I’ll go over what a Basilisk is, then how to use them, and finally, I’ll answer some questions surrounding this creature.

So try not to lock eyes as we get ready to jump into today’s post!

What is a Basilisk?

In DnD 5e Basilisks are 8 legged lizard-looking creatures with spine-covered backs, similar to a stegosaurus. They typically live in the Underdark or other cave systems that they can nest comfortably in. Although, it’s not unheard of for people to capture these creatures to use as deterrents for people entering their secret lairs.

Since it is typically an underground dweller, it has a pretty good ability to see in the dark, it possesses a 60ft darkvision. It also has a standard bite attack which using the typical stats for the creature has a +5 to hit and deals 2d6+3 Piercing Damage and 2d6 Poison Damage.

Similar to other Basilisk lore in other forms of media these creatures do also possess the ability to turn other creatures to stone. The Basilisk can look at another creature and lock eyes with it, when this occurs the creature must make a DC 12 Con Saving Throw. If they fail they start to turn to stone and are considered restrained. They are then allowed to attempt it again at the end of their next turn, if they fail a second time, they are completely turned to stone and cannot be returned to normal without the use of powerful healing spells.

It’s a CR 3 creature, meaning it can and should be encountered early on in your campaigns or when the party is lower level. It can be a tough encounter, and I do highly recommend you think of some kind of course of action the party can take if one or more is fully turned to stone.

How to use a Basilisk

Like I mentioned, use them early, that’s really the only advice I have about where they should show up in your campaign. Be it that an enemy or rival of the party has captured one and placed it in their lair. Maybe the party encounters one in the wild while looking for shelter from the elements and they stumble into its nest.

I would always recommend having some foreshadowing when there is a Basilisk nearby. Other creatures turned to stone, Rats, Goblins, other adventurers. This can allow the party to prepare for the upcoming battle, but also put some dread into them as they know the stakes.

How do you fight Basilisks in 5e?

The only real thing that anyone fighting a Basilisk should do is avert their eyes. Doing so means the Basilisk cannot use its Gaze on them. It does mean that the creature averting their eyes has disadvantage on all their attacks.

Can a Basilisk turn itself to stone in 5e?

They sure can. If it sees its own reflection, either via a mirror or in water or ice, they mistake themselves for rivals and will target themselves with their gaze.

Are Basilisks Dragons in 5e?

What do Basilisks eat in 5e?

Pretty much anything they turn to stone they eat.

Basilisks are fun creatures to use, and it’s a great one to use early on. There aren’t many truly scary low-level creatures but this is for sure one of them. So I hope you learned about this creature today and until next time, may your day be a critical success!