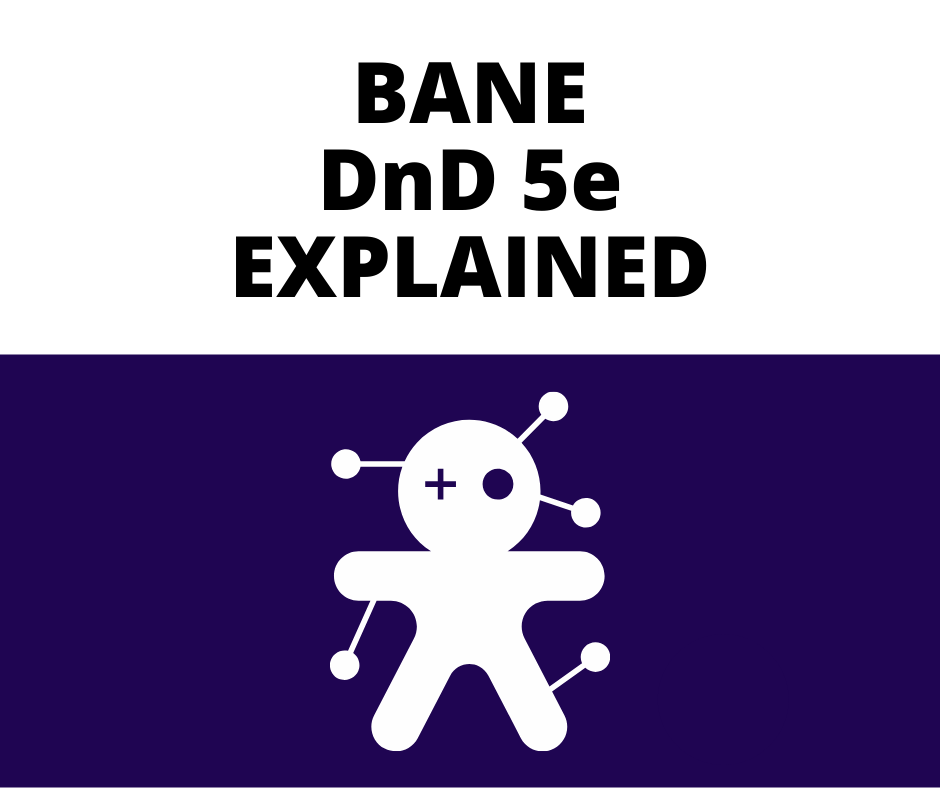 Hope you’re having a good day folks! In today’s post, Bane DnD 5e Explained, I’ll be going over this accursed spell. First I’ll cover what it does, then how to use it, and finally answer some questions surrounding the spell.

So clutch your good luck charms and get comfy as we dive right into today’s post!

Bane is a 1st level enchantment spell that takes and action to cast. It can be cast up to 30 feet away from the caster and is a concentration spell lasting up to 1 minute. Typically, only Bards and Clerics have access.

Bane is effectively the opposite of the Bless spell, both thematically and mechanically. Bane forces up to three targets of the casters choosing to make a Cha Saving Throw and anyone who fails must roll a D4 before every attack roll and saving throw roll and subtract it from the total of their respective roll.

It essentially curses the targets, while a D4 may not seem like much, it may be enough in clutch scenarios where that D4 might make the difference to prevent a critical target from being hit.

How to use Bane

It’s a very very simple spell. The targets you choose should line up with what you’re trying to accomplish. Trying to just go toe to toe with the enemy? Hit their strong or dexterous characters with Bane to lower their attack rolls. Trying to keep a powerful spellcaster at bay? Use Bane to lower their saving throw rolls and control them with other spells.

The only issue with Bane that I see is that because of its concentration aspect, you don’t really want to cast this unless you’re playing a supporting spellcaster role like a Cleric/Bard/Paladin. If you are one of those or any other supporting subclass or you’ve taken a feat to gain access to the spell, then that’s great and it can be a good little spell to keep up during combat.

Nope. In DnD a Nat 20 referrers to when the D20 naturally rolls a 20, without adding any modifiers to the roll. Bane affects the final result of the roll as it itself is technically a modifier (albeit a negative one) so it does not actually affect a Nat 20.

Typically, only Bards and Clerics. However, there are plenty of ways for characters to gain access to low-level spells, so if you REALLY want this spell, there will be a way for you to gain access to it, either via a feat, item, or multiclassing.

Which is better Bane or Bless in 5e?

In my eyes, they are more or less the same spell. One gives a buff to players, the other debuffs the enemy. Same numbers, same things affected (D4, attack rolls, and saving throws). The only reason I’d say that Bless might edge out Bane is that killing a target with Bane means that 1/3rd of your spell is now gone. Whereas, Bless could theoretically stay up for the duration of combat since it’s on allies.

Personally, I like Bane. I think it can come in handy. Is Bless mechanically better? Probably. However, I wouldn’t say Bless has enough of an advantage that it makes Bane pointless, I’d say it becomes more of a flavor-based choice for what kind of spells you think your character would cast. Would they be more inclined to help their party, or would they rather hinder the enemy?

As always I hope you learned a little about this spell, and until next time, may your day be a Critical Success!