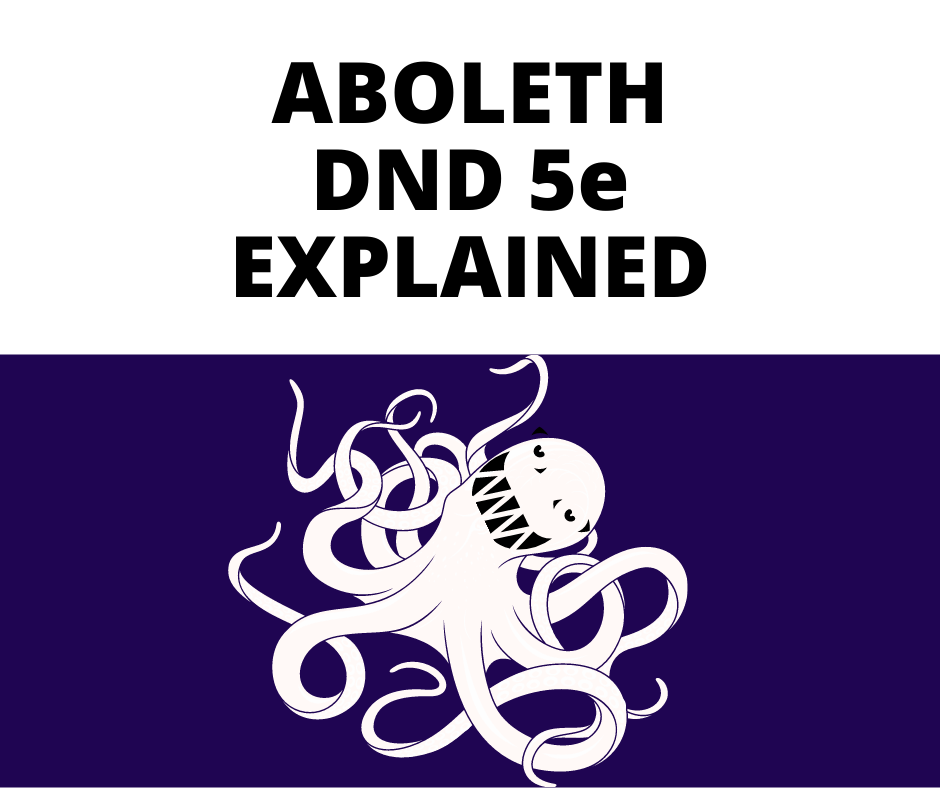 Morning folks! In today’s post, Aboleth DnD 5e Explained, I’ll be going over these ancient underwater monsters. First I’ll go over what an Aboleth is, then how to use them, and finally answer some questions on them.

So take a deep breath, and try not to mind the temperature of the water, and strap in as we dive right into the post.

What is an Aboleth?

In the DnD 5e lore for the Aboleth, they are creatures that existed before the Gods themselves. Existing in the depths of unknown lakes and seas. Using their innate psionic abilities, they would force lesser creatures into slavery.

Interestingly they have perfect memories. Meaning they forget nothing, no detail is too little to escape their memory. They also pass these perfect memories onto their next generations which means they can hold a grudge for eons.

They have some quite interesting deeper lore, but you should check out the official Monster Manual for more.

Stat-wise, they have a lot to work with. They are similar to other big boss creatures in the game, where they have legendary actions. They are CR 10 so they are a boss creature that can be used relatively early on.

Let’s break some of their stuff down.

Amphibious – This allows them to simply breathe both air and water.

Mucous Cloud – This cloud makes it so that if anyone melees the creature while underwater they must make a Con Save, and on a fail they contract a disease that forces them to only be able to breathe underwater.

Probing Telepathy – This allows the Aboleth to learn another creature’s deepest desires when they communicate telepathically with the Aboleth.

Multiattack – They can make up to 3 attacks with their tentacle

Tentacle – This is a simple melee attack, it has a +9 to hit and a 10ft reach and deals 2d6+5 Bludgeoning damage. The target must also make a Con Save, and if it fails it contracts a disease that causes the target to take damage unless it is submerged in water, or kept regularly wet every 10 minutes. Otherwise, the target takes 1d12 Acid damage every 10 minutes.

Enslave – This can be used 3 times per day. It forces a creature to make a Wis Save, if they fail they are charmed by the Aboleth until the Aboleth dies. If the target takes damage they can repeat the save, or if they get 1 mile away from the Aboleth they can also attempt the save again.

An Aboleth has 3 legendary actions it can use; it regains any spent at the start of its turn.

How to use an Aboleth?

So above I lined out exactly what the Aboelth can do, but how does a GM go about putting it into practice. I know this was always something I struggled with early on in my GMing career. So let’s cover that.

First off the thing is a big psychic pre-history monster, it’s pretty damn strong when it comes to physical attacks too. So it can for sure go toe to toe with some of your melee characters. Plus it has a pretty decent AC for being CR10, so it can be pretty slippery to hit.

Of course, it’s clear from its design, an underwater encounter that the creature is intended for, or at least one where it can go underwater. With a pretty good swim speed and the diseases it can inflict, it is definitely not something to be messed with while underwater.

Plus, the Aboleth is a relatively powerful psionic creature. The ability to enslave a creature for an unlimited duration is very powerful. Turning a parties’ fighter against them can be quite a brutal encounter. There is also kidnapping. enslaving and colluding with an important figure in a city in order to manifest its greater plans is also an option.

Then you have the addition of its legendary actions. Remember to use these, they make a monster go from tough to genuine legendary status, having it able to attack or do something outside of its turn will definitely cause a little panic in the players.

What is an Aboleth in DnD 5e?

They are big psionic fish-like creatures. They are also the oldest known creature to exist, existing before even the Gods themselves.

How big is an Aboleth in DnD 5e?

They are on average 20 feet long from tip to tail.

What color is an Aboleth in DnD 5e?

They are greyish green and have slightly pink bellies. They cover themselves in mucus that helps protect them and can disease others.

They are not. However, interestingly enough, Aboleths are somewhat scared of Mind Flayers, more as a whole than on an individual level, as an average Aboleth would wipe the floor with the average Mind Flayer. They are scared of the race since Aboleths were there for the creation and birth of all creatures and races, but the Illithid? They know very little about the Illithid, which unnerves them.

As always I hope you learned something about Aboleths and how awesome they can be in your game as a BBEG. So definitely consider them for that role, especially early on. So with that said, I’ll see you folks on the next post, and until then, may your day be a critical success!