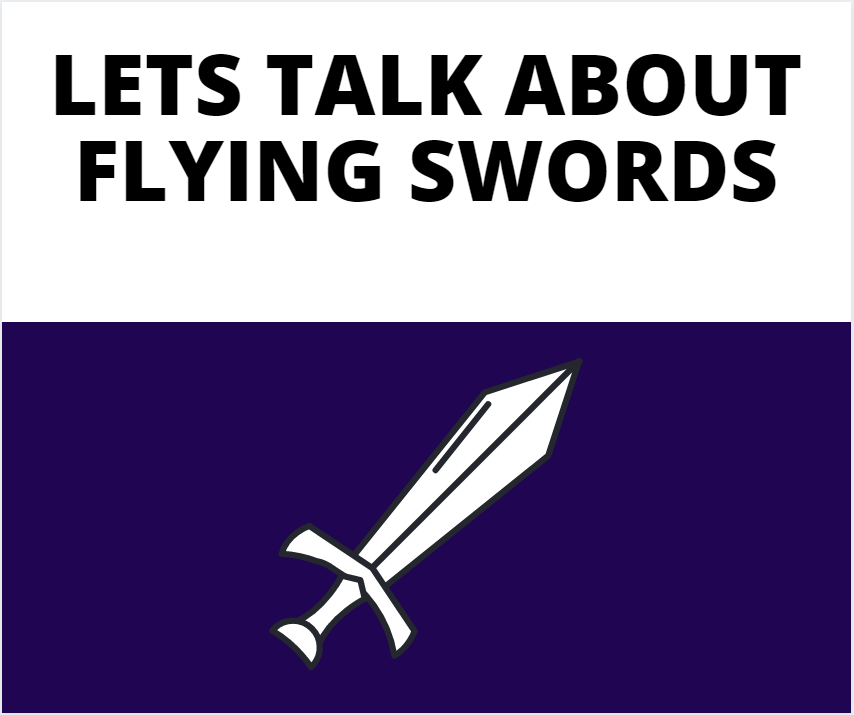 Hey y’all! In today’s post, Flying Swords in DnD 5e, we’ll be talking about the low-level magical creature known as a Flying Sword. These creatures a great way to add that spark of magic to your world for your players.

Technically speaking the Flying Sword isn’t exactly a creature, it’s more of an animated object. Like the brooms and dishcloths from the animated Merlin movie. A wizard or other spellcaster bring gives these objects a kind of false life. They aren’t considered sentient or anything, they just do as they are commanded by whoever brought them to life.

Anyhow, enough stalling, let’s crack into this “creature” and see what is all about!

In DnD 5e, we have this very low-level creature, known as a Flying Sword. Now as mentioned above, it’s not exactly a creature, it is what is known in DnD 5e as a “Construct”, a once inanimate object, given life. Now Constructs can range in differing degrees of complexity, flying swords being very low on that totem pole of complexity, and Warfoged (a playable race in DnD 5e) being at the top.

Flying Swords are created when a spellcaster uses their magic to bring to life a simple weapon to protect their place of dwelling. They may use them to ward off would-be nosy people from poking around in or near their tower/cave/dungeon. They also don’t necessarily need to be swords either, they could be daggers, maces, clubs, any relatively simple weaponry. The damage they do is depending on the weapon that they are, but typically that would be, slashing damage, bludgeoning damage, or piercing damage (check the links for details descriptions on each of those damage types).

One thing about these creatures is that they are very weak to anything that can dispel, or dampen magic. For instance, if they are the target of the dispel magic spell, they must make a Con saving throw, or they fall unconscious for 1 min. As well as this, when they aren’t moving, they give off no trace that they are any different than any other non-magical version of the weapon they are. This is unless a detect magic spell picks up the scent of magic on them.

As always I like to add in a little snippet of how I would/have described these things in my campaigns. Let’s say the party are all going into an abandoned Wizards Tower, and they are having a look around one of the chambers.

As you all step inside the musty room, dust swirls around from the opening of the door. It seems like this was once an armory of some kind. You see suits of armor, some displayed on stands, some in different states of disrepair on various tables. You also see numerous weapons, swords, bows, maces, daggers, all scattered around the room, on tables, and on the floor. As the last party member enters the chamber, the doors slam shut, with a loud thud, and a few of the swords wriggle free from their scabbards or display cases. Now four floating and very sharp looking swords hover menacingly in front of you all, ready to defend their master’s abode.

As always I hope this post helped you get a little more information about these “creatures” in DnD 5e. They are a great low-level magical creature that can be added to campaigns right at the beginner stages. I feel like they can really set the tone for how magical a world might be, if it’s a low magic setting, the party would know that whatever these things are protecting, it’s clearly worth the magical effort. If it’s a high magic setting, then it would only be obvious for a Wizard to set up some kind of defenses for their lair. So thanks for taking the time to have a read through this post and until next time, may your day be a critical success!